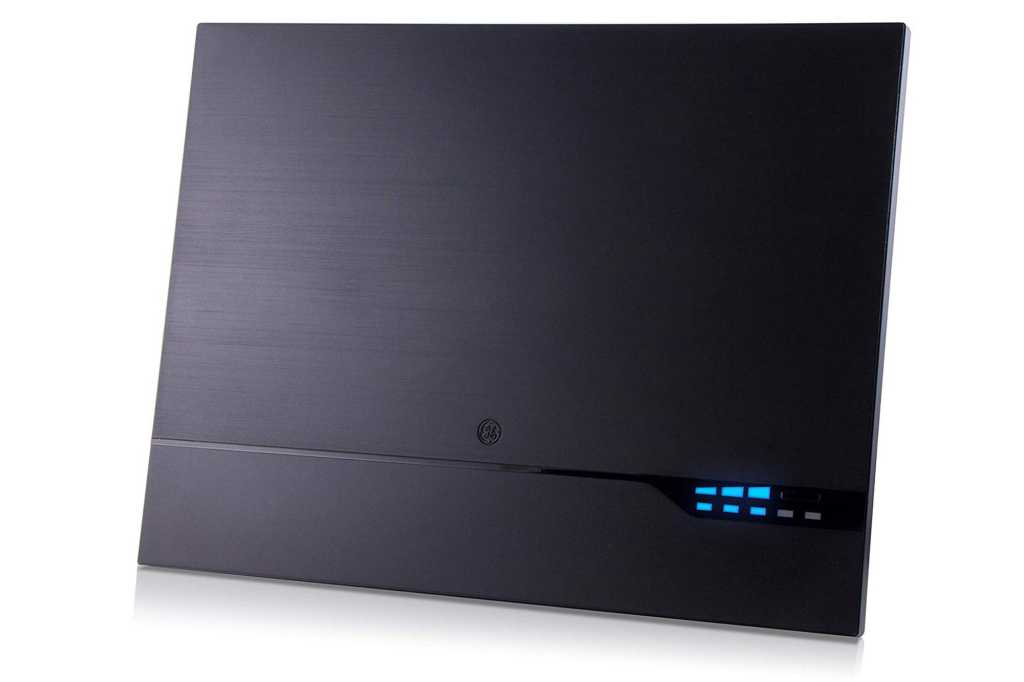 Image: Jasco Products
At a Glance

The GE Signal Finder HD Amplified Antenna is an indoor with a built-in signal finder. In our tests it did a mediocre job of pulling in TV stations.

The GE Signal Finder HD Amplified Antenna is an indoor TV antenna with a built-in signal meter that will help you find the best place to install it. You’ll need it. In TechHive’s tests the antenna exhibited mediocre reception and didn’t displace the Winegard FlatWave Amped as our favorite indoor antenna.

The antenna is about the same length and width as a magazine and looks good with a smart black plastic front. A couple of rows of LEDs in the lower right-hand corner are the antenna’s main selling point.

The top row of three LEDs indicates the general signal strength and help you find the best location in your room. A second row of five LEDs indicates the “orientation” of the antenna. This is never really explained in the user manual, but it appears to be akin to a fine-tuning indicator. There’s also a switch to turn off the LEDs.

The meter provides a very general indication of signal level across the entire UHF band and cannot be targeted to any particular channel. If you live in an area with strong or very strong signals—and that is where this antenna is designed to be used—it will provide a broad indication of where to locate it in a room.

If signals are weak, the meter won’t work as well, but you should check out an attic-mount or external antenna anyway.

Towards the end of the antenna’s 10-foot cable is an inline amplifier that requires power from a small wall-wart adapter. It uses a barrel-connector, and so it cannot be powered via a USB port on your television. This is unfortunate as it means you’ll need a spare outlet and installation probably won’t be as neat.

TechHive tests antennas by performing several scans to see how many channels are received. A pattern emerges over the course of the scans and we get to see how well an antenna pulls in the various strong and weak channels on air in the San Francisco Bay Area and Sacramento regions.

This antenna is designed for UHF reception, which includes the majority of major TV stations in most cities, but you should check your city before buying. TechHive has a guide that explains how to determine which broadcast channels are used where you live and where the transmitter towers are located.

Our top-ranked indoor antenna, the Winegard Flatwave, is similarly designed for UHF-reception only, but it managed to pull in a strong local VHF station, too. The GE Ultra Pro did not.

The marketing copy on the box advertises 60-mile reception, although this is perhaps only under perfect conditions. Numerous factors influence TV reception and these range claims shouldn’t be taken as a guarantee on this or any antenna.

The box contains three pieces: The antenna with attached cable and in-line amplifier, a power adapter for the amplifier and a plastic stand that can be connected to the rear of the antenna so it stands up on a shelf or desk.

If you don’t use the stand you’ll want to mount it to a wall. Mounting holes are on the rear with a convenient “7-inches” label printed on the case so you get the distance between your mounting screws correct. The antenna has grooves cut in the rear that the cable can be hidden inside for neat flush mounting on a wall.

The cable is 10 feet long and because it’s fixed, you might end up with a bit of surplus, but it shouldn’t be difficult to hide behind your TV.

There’s an included note that reminds customers to perform a rescan of their TV once the antenna is installed. It’s a perhaps obvious step, but enough people must forget to do it that the note is included. Presumably this is largely when people switch from cable TV to over-the-air and don’t realize a rescan is needed.

The GE Signal Finder HD looks good and the signal meter will help customers find a good position for their antenna despite its crudeness. The single most important thing with an antenna isn’t looks, however; it’s how well it performs.

The GE antenna didn’t do well in TechHive’s tests.