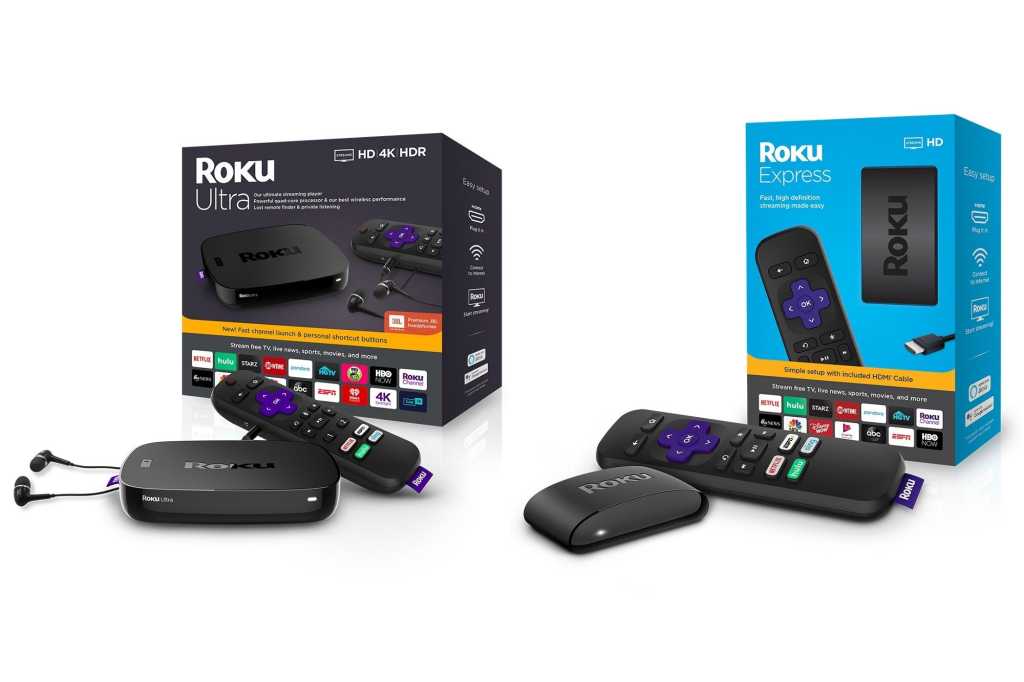 Roku is refreshing its streaming player lineup next month with a faster and more capable Roku Ultra box and a fresh look for the entry-level Roku Express.

Roku is also launching variants of the Ultra and Express at Walmart, and Best Buy is getting a variant of the existing Streaming Stick+ as an exclusive. But to make room for the all the new players, Roku is phasing out a couple of its existing ones, including the 2017 Roku Express+. That means Roku will no longer offer a streaming player with composite video output for older CRT televisions. Not a big loss—unless you’re hanging on to a CRT TV.

There’s a lot to digest, so let’s walk through the new lineup player by player.

Roku Ultra ($100): Roku’s new high-end 4K HDR player will have more memory and a higher processor clock speed than the current version, allowing apps to launch faster. Roku says it’s seen a 17-percent improvement in load times for the 100 most popular apps on its platform, a 33-percent improvement for live TV streaming services, and a 20-percent improvement for news apps. Unfortunately, it still doesn’t support Dolby Vision or HDR10+, like Amazon’s $50 Fire TV Stick 4K does.

The new Roku Ultra also includes two programmable buttons, which you can map to any voice command. This would be useful for launching favorite apps or playing music in an app like Pandora. As before, the remote supports private listening with a pair of included earbuds, and it has onboard controls for TV volume and power, but now it has a volume mute button as well.

Otherwise, the Roku Ultra looks similar to previous models. It remains the only Roku player with a USB port (for playing content from a local storage device), a microSD slot (for storing more apps), an ethernet port, and a button that can trigger a siren on a lost remote.

Roku Ultra LT ($80): Compared to the regular Roku Ultra, this Walmart exclusive lacks faster loading times and programmable buttons, and it also doesn’t have a USB port. It does, however include a microSD card slot, and ethernet port, and a pair of earbuds for the remote.

Roku Streaming Stick+ ($60): This is the same 4K HDR dongle that Roku’s been selling since 2017. As such, it’ll be a little bit slower at launching apps than the new Ultra, and it won’t have programmable buttons, a mute button, or a headphone jack on its remote; but it will be a lot cheaper.

Roku Streaming Stick+ Headphone Edition ($60): This is a Best Buy exclusive that adds a headphone jack to the remote for the same price as Roku’s regular Streaming Stick+. Bear in mind that all modern Roku players also support private listening through the Roku mobile app, but the trend away from analog headphone jacks on smartphones might make Roku’s private-listening remote more valuable than it used to be.

Roku Premiere ($40): Roku’s entry-level 4K HDR streamer uses the outdated 802.11n Wi-Fi standard (now called Wi-Fi 4), and it can’t stream on the less-crowded 5GHz band that most newer routers offer. More importantly, it comes with an infrared remote instead of an RF one, requiring line-of-sight to the streaming player, and the remote lacks buttons for TV volume, TV power, and voice control as well. Last year’s Roku Premiere+ was a far superior device for just $10 more; but sadly, Roku is killing it off.

Roku Express+ ($40): In previous years, the Walmart-exclusive Express+ was Roku’s only player with composite video output for older CRT TVs. Now, it’s HDMI-only with a smaller design. On the upside, the RF remote doesn’t require line-of-sight to the player, and it has TV volume, TV power, and voice-control buttons. Think if it as a replacement for the non-4K Roku Streaming Stick, which is being discontinued.

Roku Express ($30): The new entry-level Roku has the same smaller design as the Roku Express+, supporting up to 1080p video. It’s also more power-efficient than previous versions, so it should be able to run on USB power from 98 percent of televisions. But like the Premiere, it has an infrared remote with no TV or voice-control buttons. Most folks should trek to Walmart and spend the extra $10 for those conveniences.

Roku says most of the new players will launch in October, but the Express+ is coming at the end of this month.

Roku also preparing a software update to its operating system—dubbed Roku OS 9.2—for its new and previous streamers. While it’s not a major upgrade, it does include some faster ways to find content.

With search, Roku is adding “Zones” that come up when you search for certain subjects, such as drama or superheroes. These will be curated by human editors and updated over time. You’ll also be able to search specifically for results in 4K, and you can find results in the Roku Media Player app if you have files on a thumb drive or network share.

The home screen, meanwhile, remains focused more on apps than content, but Roku’s adding shortcuts for saving channels, turning off the TV, and setting a sleep timer on smart TVs. Roku says it will add more shortcuts to the home screen over time, and it’s also adding a tips-and-tricks channel for folks who don’t read internet articles about such things.

Finally, Roku will support launching content by voice directly in more than 30 apps, making good on a feature that was supposed to arrive as part of Roku OS 9.1. And if you’re using a Google Assistant or Amazon Alexa device for basic playback controls, those will now work with more than one Roku device in the home. All Roku players will get OS 9.2 in the coming weeks, with a limited rollout starting this month.

We’ll have reviews of the new Roku players soon. In the meantime, get a sense of what’s already available with our guide to the best media streaming devices.

Correction: An earlier version of this article said the Roku Ultra LT has a USB port. It does not.