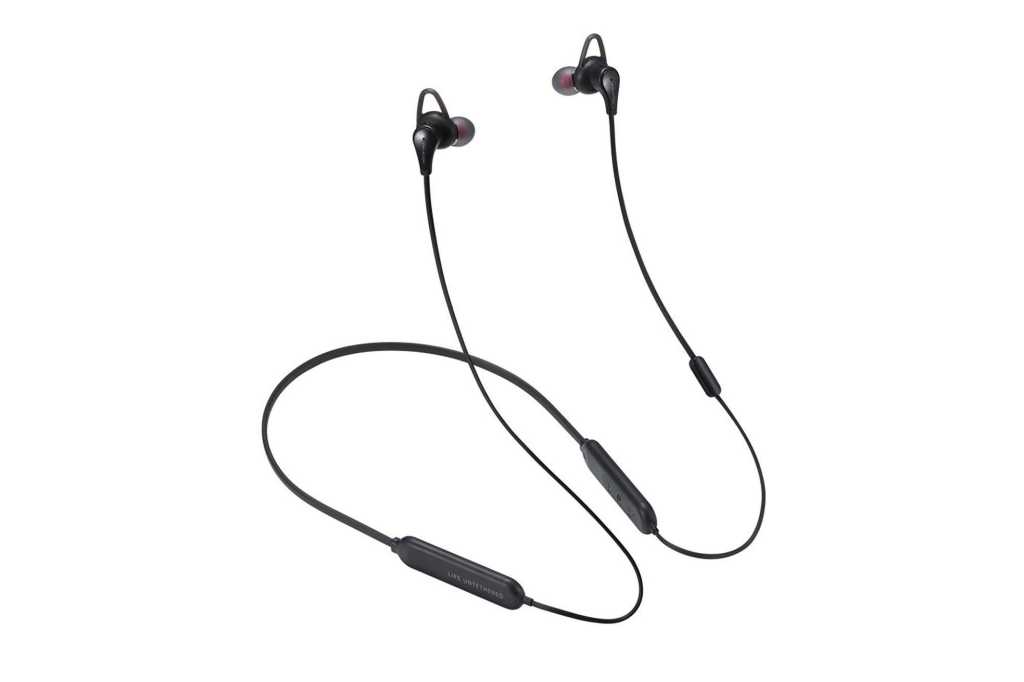 Image: Phiaton
At a Glance

Phiaton’s Curve BT120 NC come in your choice of black or white. The BT120 feature 12mm dynamic drivers and a double-layered carbon film to reduce vibrations.

The headphones are designed with what Phiaton describes as a “Memory Flex” neckband. Some other wireless in-ear monitors come designed with a rigid, plastic neckband. Not here, the Phiaton’s neckband is a tensioned plastic that will flex like spaghetti, but flex back to its original U-shaped design. I had no problem stuffing the BT120 into jacket pockets, front pant pockets, or throwing them into a backpack. I never worried about the neckband suffering any damage—and it didn’t—at any point.

Each of the neckband’s arms has a rounded, rectangular module that give the headphones a bit of balance to stay on around your neck. The one on the left serves as an inline remote for play/pause, volume up, and volume down. Those functions are on the flat side of the remote.

I wish that Phiaton had paid more attention to the inline remote’s design. The buttons aren’t easy to navigate by touch. Only the play/pause button is raised—and ever so slightly at that. I had to feel around to find the volume up or volume down buttons. I’d like to see Phiaton redesign the inline remote to make it friendlier for tactlie use.

I did like being able to press the play/pause button twice to get a verbal status on the headphone’s battery life. You won’t get a detailed answer like “Battery is at 84 percent.” Instead you’ll get “Battery is full” or “Battery is moderate.”

I had no problems using the Curve BT120 with phone calls. The headphones have a calling feature that I loved. When you have an incoming call, the headphones vibrate. I found this feature incredibly valuable. The vibration alerted me to incoming calls when I didn’t have the headphones in my ears and had put my cell phone on silent.

In standby mode, the Phiaton will last for 290 hours. If you want to wear them with just ANC enabled, you’ll be able to use them for about 12,5 hours—good enough for a transatlantic flight.

The BT120 are rated IPX4 for sweat and splash resistance. You can feel confident wearing them out for intense activities and not worry if you find yourself caught in a light rain.

I wish that the BT120 had magnetic clasps or magnets on the backs of the drivers, so you could clasp them together when you’re not wearing them in your ears. Instead Phiaton includes a plastic clip, which I didn’t like at all. Like all neckband headphones, if you’re not careful, the Phiaton will have a tendency to slide to one side or the other and could potentially fall off without you knowing it.

Bluetooth 4.2 with multipoint connection capabilities is onboard. You can connect any Bluetooth-enabled sources simultaneously to the Phiaton and the headphones will auto-switch between the two depending on which source is playing. This is a great feature if you have a smartphone and a laptop or a smartphone and a tablet as you travel and don’t want to worry about activating the pairing on each one.

Decent but not market-leading noise cancelling

The real selling point of the BT 210 is its active noise-cancelling feature. There are two very important parts to noise cancelling in an in-ear monitor like the BT120. You must have a good seal with the in-ear-driver for the active noise cancelling engine to work optimally. If you don’t get a good seal, you’ll have noise bleed that the ANC engine won’t be able to process.

Phiaton includes three tip sizes that should do the job for just about every ear size. I was happy to see the silicone ear tips had good grip. Over the past two years especially, I’ve had some in-ear headphones come paired with super-slick ear tips that just slide out.

Once you have a good seal, activating ANC is straightforward. There’s a toggle button on the left inline remote. Phiaton’s ANC effect is immediate and noticeable. The Phiaton’s algorithm significantly reduces HVAC-related noises at the lower and midrange bands to a subtle din. There’s no question that the Phiatons took the edge off of noisy environments during my tests on car rides, trains, and subways. I didn’t have the opportunity to test the BT120 on an airplane during the review period.

The Phiatons faired poorly in any windy environment. The ANC microphones transferred and amplified that wind-whipped microphone noise into my ears. I had to turn ANC off when there was any wind present. Phiaton isn’t alone here. There are many ANC headphones that have the same issue.

What the Phiaton didn’t do as well was eliminate rumble and engine noise. The best way to describe the experience is that the Phiaton took the edge off the most prevalent and annoying environmental sounds; but they didn’t put me in a complete cone of silence.

I tested the Phiatons with an iPhone XS with Tidal Master and Tidal Hi-Fi trac ks. I have to tell you that these modestlypriced headphones sounded pretty darn good—well beyond what their price point would indicate. There is no aptX or aptX HD codec onboard. The headphones also don’t have the capability of streaming at higher bit rates to better match your source. Nevertheless, you’d be hard pressed to notice at times.

Overall, the Phiaton BT120 delivered a well-balanced, punchy sound. The Phiatons err on the side of warm and euphonic. I found the midrange to be clean with high-end frequencies slightly rolled off—brass instruments and cymbals wont show off their top-end shine.

The Phiatons have an exciting bass response. It’s more audiophile than “Xtra Bass.” It’s natural, not artifical, and I like that. The Phiaton’s are rated to resolve frequencies down to 20Hz but temper that expectation. They won’t reproduce subterranean bass with any authority. I tested tracks like Aaron Copeland’s “Fanfare for the Common Man” by the Minnesota Orchestra Conducted by Eiji Oue. Those intoxicating bass drums fell short of their full, crisp, dynamic potential, erring into some smearing. I noted the same on Holly Cole’s audiophile favorite, “Train Song.” There’s a slight midbass boost that adds to the euphonic character and gives you the sensation that the headphones are capable of delivering deep, punchy bass. I noted this on tracks like Imagine Dragons’ “Natural.” All in all, the Phiaton Curve BT120 NC sounds much more expensive than its price point suggests.

Phiaton’s Curve BT120 NC headphones are a tremendous value for the frequent traveller or city dweller who wants a wireless pair of in-ear headphones with active noise cancelling. With a flexible neckband, multipoint Bluetooth connections, IPX4 rating, and fast charging, you’ll be hard-pressed to find a better value at this price point. The fact that these headphones also sound good to boot is just icing on the cake. Highly recommended.