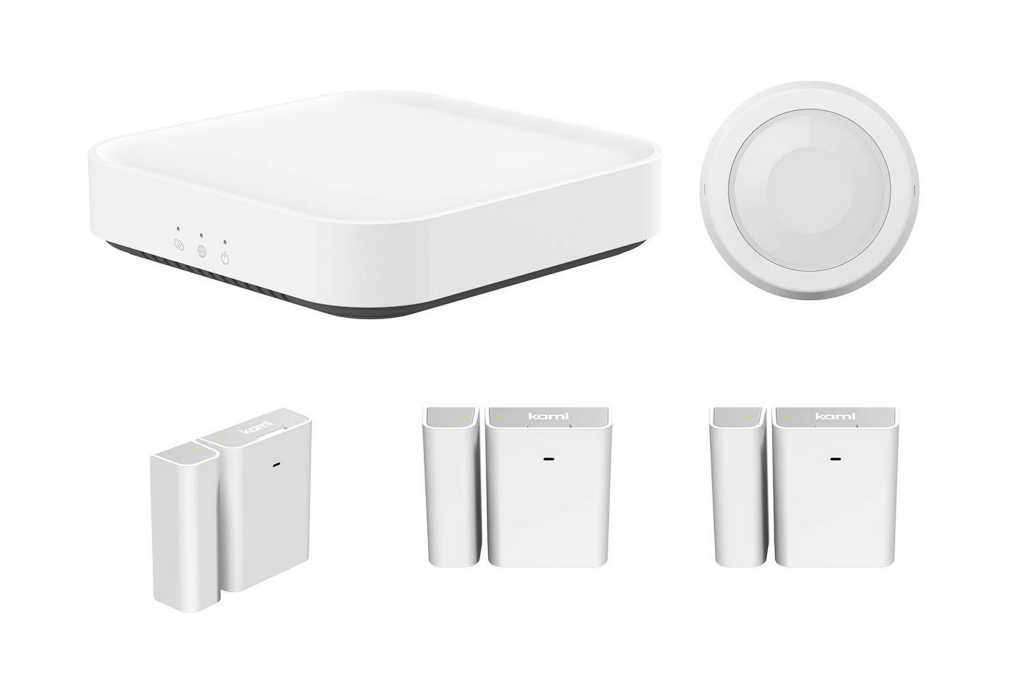 Yi Technology
At a Glance

This security system is extremely cheap—in every sense of the word.

I was immediately intrigued by the pitch for Yi Technology’s Kami Home Security product: “You can set it up in five minutes!” Anything that makes smart-home tech simpler is a big win in my book. Alas, a savvy email pitch does not a reality make, and as it turns out, Kami is quite the opposite of what was promised. Not only is setup considerably more involved than expected, the system is only quasi-functional—and doesn’t come close to cutting it as a legitimate security option.

Let’s start with that setup claim. The Kami Starter Kit (which uses ZigBee to communicate with its component parts) arrives with promise: five small boxes wrapped together in a package, each one carrying a separate piece of the Kami puzzle. The kit includes a small hub, three door/window sensors, and a motion sensor. A security camera is sold separately but wasn’t sent for this review (we’ll publish stand-alone reviews of the Kami indoor and outdoor cameras down the road.) There are no provisions for controlling other smart-home devices, such as lights, but Yi Technology makes no such promises, either. This is a home secrity system, not a smart-home system.

Top pick in this category

Everything in the package at least looks great. The hub is tiny, smaller than a tin of mints, and the sensors are impressively compact and stylish. The immediate problem with all of this, however, is how much packaging is involved. Each box is sealed with tape, and inside each of them you’ll find layers and layers of needless additional packaging. Even the tiny user manual (a single slip of paper) is packed inside a tape-sealed cardboard envelope. That user guide (there’s one for each component) primarily directs you to download the Kami app and follow the instructions there.

In the Kami app, those instructions are largely delivered via a lengthy video: one for each type of Kami component. It’s an inefficient way to get this information across, and since Kami has a somewhat unusual set of setup requirements that includes cracking open sensors, installing the coin cell battery, scanning a tiny QR code inside the sensor, and resetting the sensor by pressing a button set inside a tiny hole with the included pin, it bears watching the material in full so you don’t goof it up.

The process is far from easy and quick, hampered by a huge number of steps and an even larger amount of packaging to contend with. Here’s what it takes just to get to that reset pin I mentioned: Unwrap the plastic from the main package, remove the sensor box, cut open the tape on the sensor box, dig through the various levels of packaging and accessories to find another box within this box, open up that box, remove the bubble-wrapped package inside, find the small plastic baggie inside that package, and then remove the pin from it. (Pro tip: Just use a paperclip.)

Needless to say, I did not get Kami set up in five minutes. After 30 minutes I had the hub and two sensors set up—and not because I ran into any significant trouble along the way. That’s just how long it takes. The only hiccup I encountered was in trying to photograph the QR code inside each scanner. This code is so tiny that my phone’s camera couldn’t focus on it in interior light conditions. I had to take the device outside during broad daylight in order to get the lens to focus on the miniature code.

Another oddity involves the Kami hub. This is the strangest hub design I’ve ever seen: It must be wired to your router via an ethernet cable, but there’s no RJ45 port on the hub itself. Instead, you’ll find the ethernet port at the end of the power cable, where it plugs into the wall. It’s a crazy (and, again, inefficient) design that makes you run your network cable to the power outlet, and it’s an oddity that has to be seen to be believed.

There isn’t much to Kami’s app. The hub offers just two modes: Home (everything off) and Away (everything on), with no way to customize any of this, and no “stay” mode that only arms the door/window sensors. The system offers no automations, no hooks into other smart home systems or services—including Alexa—and there’s no professional monitoring plan, optional or otherwise. But hey, for 100 bucks, you can’t expect much.

It’s easy (if not intuitive) to turn the Kami system on by sliding the central “Home” icon to the right, putting it in Away mode. Once you do, Kami alerts whenever a sensor is tripped, and by that, I mean a weak siren erupts from the hub—at roughly the volume of a television turned down low—and you receive a push notification on your phone. Within the Kami app, the siren can be easily turned off, at which point the system resets.

Kami keeps a running log of activity, but it mainly amounts to a list of time stamps for each sensor and notices of “Detected someone moving” or when a door was opened or closed. While the motion sensor is quite sensitive, I found Kami’s sensors erratic at detecting whether the door was open or closed—and slow to update the app’s main display. That said, at least it’s amusing to enjoy the pidgin English in which many of the app’s messages are written. (“Base Stations In sleepy now.”) Other issues are somewhat more alarming, like the Kami app claiming I have three cameras installed and in need of firmware updates—when in fact I had none. Whether this is a strange bug or a security risk, I can’t say.

Kami’s main—and perhaps only—advantage is that it is extremely cheap. If you have totally non-serious security needs—like a need to protect your favorite cookies in the pantry—it might fit the bill. Those who want a legitimate security system will need to look elsewhere.