Want to add a new level of immersion to movies and games by syncing your Philips Hue lights with the picture on your TV? Until now, doing so involved a cumbersome process of mirroring your PC’s desktop on your TV screen, but a much easier method is on tap for next month.

Slated to arrive on October 15 for $230, the Philips Hue Play HDMI Sync Box looks like a standard HDMI switch, complete with four HDMI inputs and an HDMI output.

Just plug your video sources into the Hue Play HDMI Sync Box, connect the HDMI output to your TV (yes, 4K HDR pass-through is supported), and then use a Philips Hue mobile app to sync up to 10 Philips Hue lights (purchased separately, of course) to the images on your TV screen. You’ll also need the $60 Hue Smart BridgeRemove non-product link to make the magic happen, but you’ll already have that if you’re using Hue bulbs (unless you’ve connected the latest-generation of Hue bulbs via Bluetooth to avoid that requirement).

I had a chance to check out the HDMI Sync Box in the living room of a Lower East Side condo last month, and the overall effect of the synced-up Hue lights was indeed impressive and immersive, not to mention quite distracting. 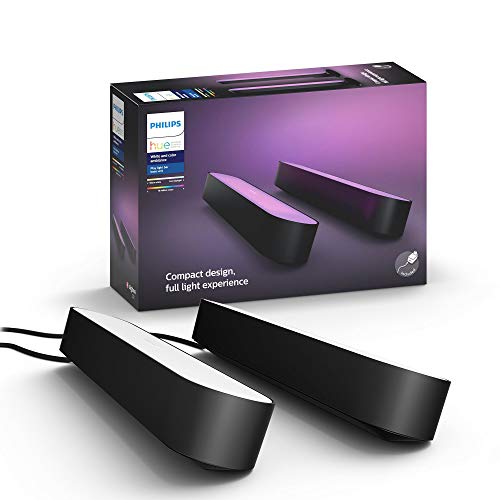 First up was a trailer for an Avengers movie, and the Hue lights obediently pulsed and throbbed to the flashing images, with almost none or the lag that I’ve seen in other so-called “responsive” TV bias lighting setups.

We also checked out a game trailer, and again, the lights did a nice job of glowing in time to the demo, making it feel almost like the flickering torches on the graphical dungeon wall were crackling in the condo, as well.

The HDMI Sync Box itself is set to automatically switch to whichever video input is active, while the dedicated Hue Sync mobile app lets you switch between presets, as well as tinker with brightness and intensity settings.

You’ll also be able to assign presets to particular video sources, handy for boosting the syncing intensity for your games while (if you wish) keeping your Hue lights a little more subtle for movies.

I’d need to spend more time with the HDMI Sync Box to render a final verdict, but at first glance, the new Hue device looks like one of the most promising responsive bias lighting systems I’ve seen. Whether you want pulsing lights around your TV while you’re watching, say, The Godfather, is, of course, a matter of taste.

This new Hue device falls under the general category of TV bias lighting, which (broadly speaking) is either a light strip or a lamp that sits behind your set and casts a halo around the screen.

With static TV bias lighting, which neither changes color nor syncs to the picture, the idea is to subtly boost the apparent contrast of the picture while also relieving eye strain, all without distorting the image or distracting you from the content at hand.

Responsive TV bias lighting setups like the Hue Play HDMI Sync Box, however, are all about putting on a show, with the colors on the screen looking like they’re bleeding onto the wall. Fans of responsive TV bias lighting call it immersive, while video purists deem it overly distracting, with the pulsing colors distorting the picture on the screen.

Regardless of where you fall in the static-versus-responsive bias lighting debate, it’s easy to see the appeal of the Hue HDMI Sync Box when it comes to gaming. I had a blast playing PC games with synced-up Hue Play light bars behind my computer monitor, and I’m eager to try some console gaming with this new Hue bias lighting rig. Stay tuned for a full review.