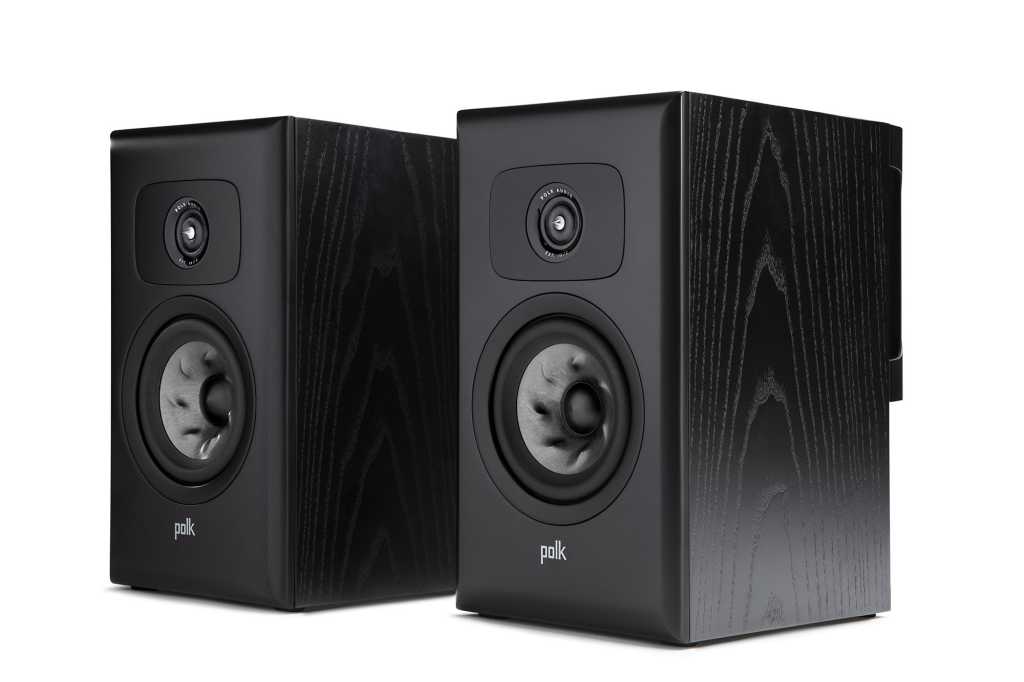 You’d be hard-pressed to find better-sounding bookshelf speakers than the Polk Legend L100. They have plenty of bass, don’t overwhelm in the mid-range, and let you discern things musical that most speakers don’t, even when you’re not listening dead center.

Sound is like food in that tastes can vary wildly. So take it with your own particular grain of seasoning when I say that I’ve rarely heard bookshelf speakers I liked better than Polk Audio’s Legend L100. There’s a particular reason I like them, but I don’t want to spoil the surprise (such as it is).

The smallest speakers in a family that includes two floorstanding models, each L100 measures 13.64 x 7.78 x 11.29 inches (HxWxD) and weighs approximately 17 pounds. By my lights that’s stretching the definition of bookshelf form factor just a mite. The unusual depth is due to the bass dispersion panel (the ribbed section in the image below) that’s attached to the back of the speaker, spreading low-frequency waves emanating from the rear port.

You’ll need tall and deep shelves to fit the L100, but you’d be better off placing them out in the open, where the sound from the rear port can spread out without acoustical hindrance. Just sayin’.

Each speaker houses a 5.25-inch woofer and a 1.0-inch tweeter. The woofer is dimpled in an unusual pattern that the company calls “turbine,” because the pattern resembles the blades of a fan. The tweeter is referred to as a “pinnacle ring radiator”. That is, there’s a tall (and sharp!) cone in the middle that disperses waves in a 360-degree (vertically) cupped pattern.

The L100 are 4-ohm (3- to 4-ohm, actually) speakers that will handle up to 160 watts per channel. Their gold-plated binding posts can accommodate banana plugs, spade connectors, or bare wire connections. Frequency response is rated at a somewhat ludicrous 43Hz to 50kHz. Ludicrous because only very young humans can hear 20kHz, let alone 50kHz. Indeed, as a matter of course, inaudible higher frequencies are filtered out as they can wreak havoc with the frequencies you can actually hear.

To be honest, though the L100 look nice enough, their appearance didn’t shout “$1,200 speakers!” to me right out of the box. That said, I’m also not entirely sure what $1,200 speakers should look like. I don’t like ostentatious, though, and the L100 will fit in just about any environment. They’re just not conversation starters. At least not until you listen to them.

Upon said listening, I did begin to suspect I might be shooting a tad low in my financial estimates, which leads me to…

The L100 sound very, very good, although again—the usual caveat about differing tastes. I used a NAD M10 streaming amplifier (rated to produce 100 watts continuous into 4 ohms) to drive the speakers, and the result was distortion-free to my ears from barely audible to 100. The sound color didn’t vary unduly with loudness, though there was what I like to call the normal “graying” or lessening of apparent upper frequency reproduction at higher volumes, which is normal and varies by listener and environment.

What particularly impressed me about the L100, and the reason I liked them so much (secret revealed!), was their bass reproduction. With no additional EQ, it was round and suitably punchy without being overly in your face. Absolutely dead-on for my tastes, but there’s more there via EQ if you want it. Apparently, the aforementioned bass dispersion panel works quite nicely.

I’ve never heard a pair of speakers more well-tuned for my tastes out of the box. I never felt any compulsion to hit up the M10’s EQ during normal listening, at least with high-fidelity material. That said, if you’re a mid-range junkie, aka, a JBL fan, you might find the L100’s frequency reproduction a bit flat for your tastes. I’m talking faint impressions here, but I had that thought when listening, so I thought I’d pass it along.

I could babble on about sound field, isolation and so-on—so I will for just a bit. I found it particularly easy to pick out individual instruments in all sorts of material (orchestral, rock, dance, etc.) as well as hear what processing had taken place.

Indeed, if you’re an EDM composer and want to know when you’re over the top with your side-chain compression (using a signal from a second source to modulate compression on the primary material), the L100 will let you know.  You won’t find anything much more accurate outside of studio monitors. If all thatis meaningless to you, that’s my very roundabout way of saying the L100 are darn accurate (in a musical way) in their reproduction.

If you have the cash, I can safely say you’ll enjoy listening to Polk’s Legend L100 bookshelf speakers, and they can handle a fair amount of volume without spoiling the party. Then again, I can say that for significantly cheaper speakers—such as Yamaha’s self-powered HS studio monitors that I use.

But those don’t radiate sound around the room the way the L100 do, which is an important consideration if you’re not planning on sitting dead center all the time—like when you’re dancing around the room because of the L100’s supremely well-tuned bass (and an appropriately catchy tune).

These are very, very good-sounding speakers from Polk. Give them a listen.