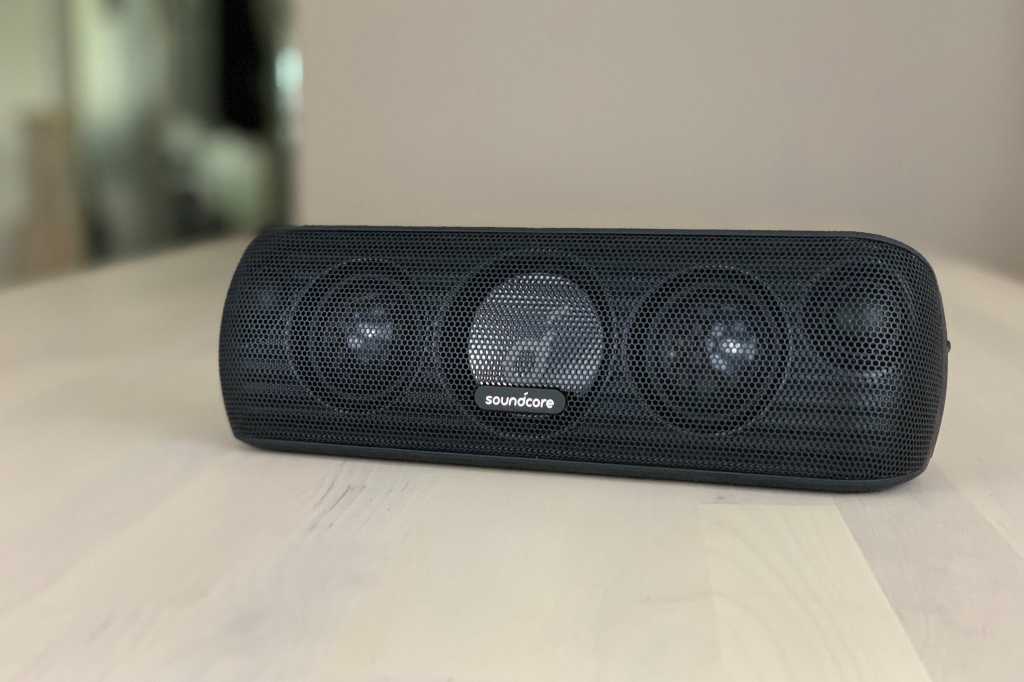 Although this compact, $100 Bluetooth speaker could do with a little more high-end detail, its attention to the mid-range pays dividends when it comes to delivering rich, robust sound.

We’ve heard plenty of middle-of-the-road Bluetooth speakers that try to juice your tunes with brassy, boomy sound. The Anker Soundcore Motion+ isn’t one of them, but this compact, $100 speaker could do with a little more high-end detail. Its attention to mid-range frequencies, on the other hand, pays dividends when it comes to delivering rich, robust sound, with an impressive (but not overbearing, provided a certain feature is turned off) foundation of bass response . The Motion+’s weatherized design, app-based EQ settings, and aptX support sweeten the deal.

Measuring a little shy of a foot wide, about three inches high and thick, the 2.3-pound Soundcore Motion+ feels heavy given its size. Encased in a virtually waterproof shell (Anker claims an ingress protection rating of IPX7, meaning the speaker can withsetand being immersed in up to a meter of water for 30 minutes), the Motion+ features a black aluminum grille that reveals its twin tweeters and woofers flanking a large passive radiator. The wedge-like design of the Motion+’s enclosure aims its drivers at about a 15-degree angle relative to the surface on which the speaker is sitting, so the music is directed at your ears and not your chest. The rubberized sides and back of the speaker feel reassuringly rugged, although they also accumulate oily fingerprints.

The Motion+’s power button is on the right side of the speaker, while the USB-C charging port and a 3.5mm analog audio input sit just beneath, securely hidden by a water-tight rubber flap. (A USB-C charging cable and an audio cable are both included.) You’ll find buttons along the top of the speakers for volume, Bluetooth pairing, and the speaker’s bass-boosting “BassUp” features (which I’ll get to in a moment).

A button in the center of the speaker–between the volume-down and volume-up buttons– performs a variety of functions depending on whether you press it once, press it multiple times, or hoild it down for a few seconds. Press the button once, for example, to play and pause your music or to answer a call on your Bluetooth-connected cellphone (in effect, turning the Motion+ into a speakerphone). Hold the button down for a couple of seconds and you’ll summon Siri or Google Assistant on your iPhone or Android phone respectively. Hold the button for more than three seconds, and you can sync the Motion+ to a second Motion+ to create a left/right stereo pair.

Besides its Bluetooth 5.0 support, the Soundcore Motion+ also features the aptX audio codec, which can deliver near-CD-quality sound–provided you’re the device you’re streaming music from also supports aptX. Support for that codec is relatively common on Android phones, but you won’t find support for it on any iOS device (although Macbooks do support it). That’s unfortunate, as we like aptX (and we like aptX HD even more).

If you want to tinker with the Motion+’s EQ, you can do so using the Soundcore mobile app. Once the app connects to the speaker, you can switch between six EQ presets or fiddle with the app’s nine equalizer sliders.

One of the EQ presets is called “BassUp,” which is the name of Anker’s bass-boosting audio technology. We’ll cover the Motion+’s BassUp performance in a moment; for now, just know that you can toggle the BassUp mode using either the Soundcore app or by pressing the BassUp button on the top of the speaker.

The Soundcore app also lets you adjust the Motion+’s automatic power-off feature, which you can set for five minutes, 10 minutes, 30 minutes, or an hour. That’s a nice feature, but those are the only settings available. There’s no sleep timer, either.

The Anker Soundcore Motion+ did a good  job of filling my living room with sound given its size, particularly when I placed it on the floor; indeed, connected to my iPhone XS, the Motion+ got quite loud when I cranked the volume all the way. Since it’s not an omnidirectional speaker, the Motion+’s sound became a bit muffled when I moved behind the speaker, so you should be sure to point it toward any listeners rather than plunking it in the middle of a crowd. 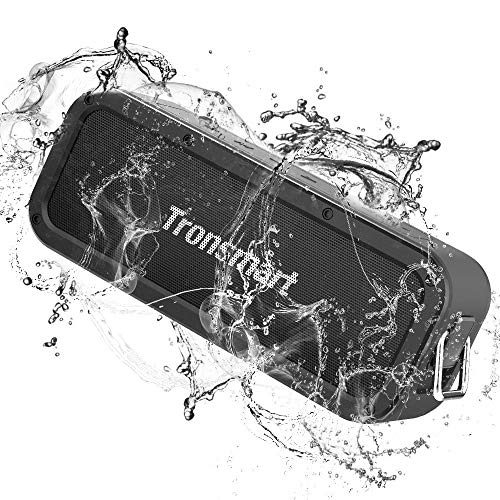 Switching the speaker to the custom EQ mode and sticking with a flat frequency response, the Motion+ sounded pretty impressive given its $100 price tag, although I wouldn’t have minded more high-end detail from the speaker’s twin tweeters. I did appreciated the Motion+’s relatively powerful bass, even if the boomy BassUp feature was overkill for most of the tracks I tried. Crucially, the Motion+’s robust mid-range kept the sound from feeling too thin.

Dialing up Vlado Perlemuter’s rendition of Maurice Ravel’s solo piano works on the Nimbus Records label (granted, probably not the album the makers of the Motion+ had in mind when they designed thios speaker), the sound was full and relatively rich, if (again) a tad lacking in high-end detail. Skipping over to the title track of Bruce Springsteen’s The Ghost of Tom Joad, I liked the sound of the plucking acoustic guitar scenes, while the rising synth sounded appropriately warm without being overbearing (that’s with the BassUp feature turned off, mind you).

While I wish the Motion+ delivered finer high-end detail, I prefer its sound to cheaper Bluetooth speakers that sacrifice mid-range sound for a shrill yet thumpy mixture of thunderous bass and a overly brassy high end. Indeed, because of its solid mid-range sound, the Motion+ actually sounds better the more you crank the volume, making it ideal for outdoor playback.

Anker promises 12 hours of battery life from the Motion+’s rechargeable battery, and after several hours of playback, I’d only put a modest dent in the speaker’s battery meter.

You can’t expect perfect sound from a $100 Bluetooth speaker, but Anker wisely chose a solid middle ground when it came to the Soundcore Motion+, a compact, waterproof speaker that eschews goosed, flashy sound (the too-boomy BassUp mode notwithstanding) for robust mid-range performance. Sure, a little more high-end detail would have been nice, but if you’re hoping to take your portable sound to the next level, be prepared to shell out a much bigger chunk of change.