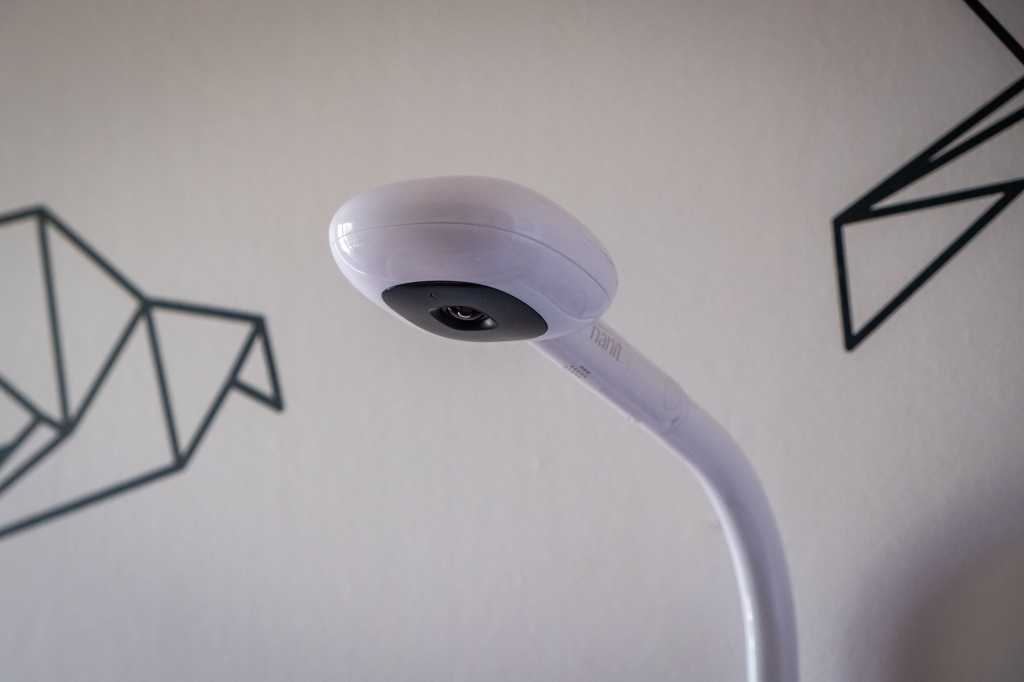 The Nanit Plus is a top end model baby monitor that provides premium features and breath tracking relief for anxious parents.

The whole purpose of baby monitors is to observe our little ones and confirm they’re all right. High-resolution cameras are useful for seeing if they’re awake or still sleeping, and to make sure they haven’t rolled over or have a loose blanket over their face. But the typical baby monitor isn’t so great at reassuring a newborn’s parents, such as me, that their sleeping infant is breathing normally. The Nanit Complete Monitoring system includes a camera, of course, but it also features a patterned swaddle and a band that the baby wears. This sleepwear works with the camera to track baby’s every breath, sending an alert to the parents’ smartphones if anything is amiss.

The Nanit Plus Complete Monitoring System consists of three parts: The Nanit Plus camera unit, which records video in resolution of 960p and provides two-way audio, a night light, and sound and motion sensors; the aforementioned Breathing Wear, which consists of the patterned swaddle and a patterned band for monitoring the baby’s respiration; and the Nanit mobile app (available for Android and iOS), which you’ll use to monitor the camera’s video stream. The app will also alert you to potential problems. Unlike some other baby monitors we’ve reviewed, Nanit does not have a dedicated video monitor.

Updated October 14, 2019 to report that Nanit has added an Echo Show integration to the Nait Plus baby-monitoring system, enabling parents with any Echo Show device in the home to stream live video and audio from the camera to the Echo Show’s display. We have not evaluated this feature, but thought readers considering the device would want to know.

The wall-mount version of the Nanit Plus costs $299, while the floor-standing version reviewed here costs $379. But those prices do not include any of the Breathing Wear (Nanit says babies who are able to roll over on their own should wear only the patterned band and not the swaddle). You can buy a bundle that includes one swaddle, one band, and the wall-mount camera for $379. The same package with the floor-standing camera costs $449. Each bundle also includes one tabletop Multi-Stand that enables you to take the Nanit Plus Camera on the road, or you can use it to convert the camera into a nanny cam that monitors the room instead of the crib. Additional stands cost $49 each.

All camera purchases include a one-year subscription to Nanit Insights, which provides sleep tracking, breathing monitoring, video storage, highlight and timelapse reels, and personalized parenting tips. When the subscription expires, you can view a live stream from the camera, but you won’t get the other features. One year should be enough for most parents, but there are three service tiers available to anyone who wants it beyond that: Seven days of stats and video storage costs $5 per month ($50 if paid annually), 30 days of storage costs $10 per month ($100 if paid annually), and there’s an unlimited plan that costs $30 per month ($300 if paid annually).

Installation was pleasantly simple and quick, following either the included booklet or the app. I chose the floor-standing model since my three-month-old son sleeps in both the bassinet in our bedroom and in the crib in his nursery. I thought the camera would be easy to move back and forth between the two rooms, but I quickly discovered that it’s not (I’ll explain why in a bit). The stand consists of multiple pre-wired sections, so everything just needs to be either snapped or twisted together. For the child’s safety, the remaining length of power cord runs along the floor in a rigid plastic channel. Attaching a third leg lets the camera stand on its own, or you can remove the leg to lean the camera snug against a wall. Dealing with the cable-management channel and removing and replacing the third leg of the stand each time I moved the camera ended up being such a hassle that we decided to use the camera only in the nursery.

Pairing the camera with my smartphone was simple once I installed the app.The initial connection is made via Bluetooth, and you then provide the password for your home Wi-Fi network. This allows you to access the camera from anywhere you have broadband access, and I found myself accessing this feed frequently to check on my son while I was at work.

The app provides a slider tool that you’ll use to draw a virtual boundary around the baby’s crib. This enables the system to distinguish between the baby’s movement and when an adult leans into the crib to tend to the baby or pick it up. The app will ask for a few details about your child, including its name, birth date and gender. It will use this information to offer personalized parenting tips, but you can skip this step if you prefer.

A live feed from the camera occupies most of the Nanit Insights main screen. Video from the camera was impressively sharp, clear, and color accurate. Many of my friends and family members commented on how good the image looked. Infrared illumination provided more than adequate night vision, as you can see in the right-hand screenshot below.

If sound or movement crosses a defined threshold, you’ll receive a push notification on your smartphone whether the app is open or not. You can also choose to monitor the sound the camera is picking up even if you’re using other apps or have your phone locked. I left this latter setting turned off most of the time, as the notifications were sufficient; plus, walking in during a crying session caused an irritating feedback loop. Some parents use two-way audio to soothe a fussing baby, but I don’t think I’ll find that feature useful until my son gets older.

The app will also display important statistics, including the current temperature and humidity level in the room, as well as event data, such as how long the baby has been sleeping or when he was last attended to. The Breathing Wear needs to be initiated each sleep session. When it is, the app will display the baby’s breaths per minute.

The real-time breathing monitoring reduced my anxiety, but the monitoring system comes with just one set of machine-washable Breathing Wear. As with the rest of your baby’s wardrobe, you’ll want multiple sets of Breathing Wear unless you do laundry every day (or multiple times a day). We tried a non-patterned swaddle and were surprised to discover that it worked with the camera, but it didn’t work consistently enough that I’d recommend it. Additional Nanit swaddles cost $35 each or you can buy a set of three for $70. Breathing bands cost $25 each or $50 for a package of three. Each is available in two sizes: Large and small.

When your Nanit Insights subscription expires, you’ll no longer receive updates in the three tabs shown above. The Activity tab (above, left) is a timeline of events, such as when the baby has gone to sleep, woke up, or a caregiver has tended to him or her. Each of these moments will have a video clip associated with it. The Dashboard tab (above, middle) displays such statistics as sleep time, the number of naps, and the last wake time. I don’t check the Dashboard often, but I can imagine it being more useful when we move on to sleep training to establish a regular sleep schedule for Leo.

Nanit says the information displayed in the Tips tab (above, right) draws from events the camera records. If you’re inconsistent about what time you put your baby to bed each night, for instance, the app might suggest maintaining a more consistent schedule, which will make sleep training easier. Having read lots of books and articles on caring for a baby before Leo came into the world, I didn’t find anything particularly new in these tips, but you can filter the information and retain anything you find useful.

The Nanit Plus Complete Monitoring system is one of the most expensive baby monitors on the market, but it is also one of the most sophisticated.That said, it is missing some of the features you’ll find in lesser systems. There’s no means of playing music, for example—although it can play nature sounds, and Nanit is exploring the feasibility of adding lullabies to the system. And if you’d prefer to see an always-on live stream of your baby’s crib, you’ll need a secondary device (another smartphone or a tablet, for example) that’s had its screen-saver turned off. It would also be helpful to have a battery-power option for when you’re traveling.

In the end, none of the Nanit Plus Camera’s shortcomings outweigh its many benefits. The camera’s image quality is fantastic, the Nanit Insights app is easy to use, and the information the system tracks is very useful. Just knowing your little one is breathing is a relief, and no new parent can put a price on that kind of peace of mind.

Update: This article was updated shortly after publication to correct the price of the bundle that includes the floor-standing camera, one swaddle, and one band; and also to report that the Nanit Plus can play nature sounds to soothe a baby.