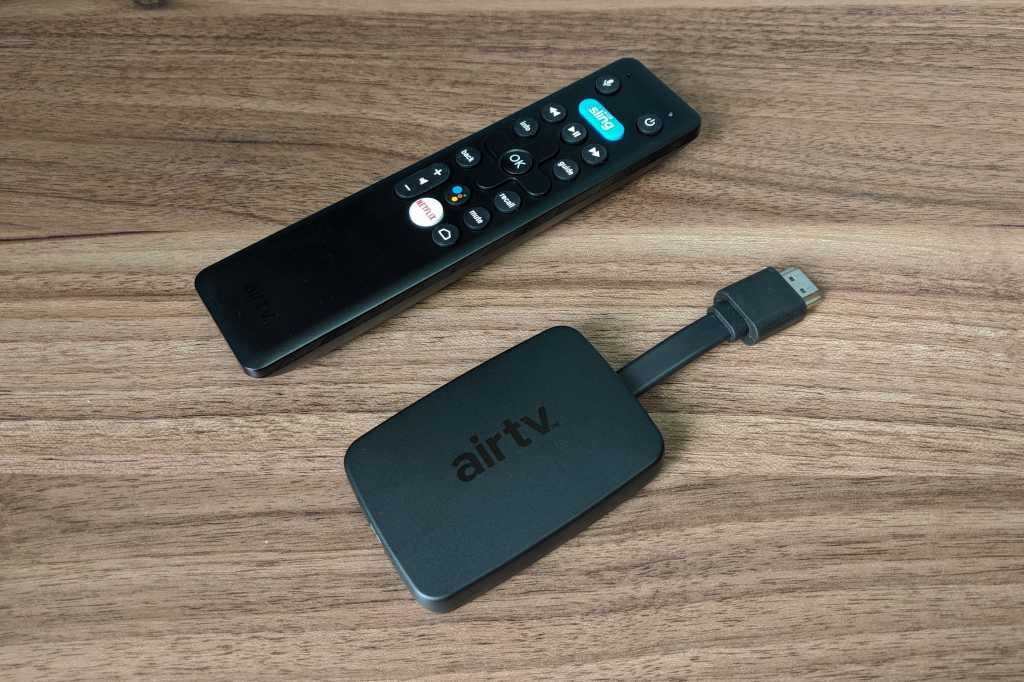 This Sling-centric streaming dongle gets the hardware right. It’s the software and Sling TV service that remain iffy.

If you subscribe to Sling TV—and plan to for a while—the AirTV Mini could be the best streaming device for you.

Unlike a Roku or Amazon Fire TV Stick, the $80 AirTV Mini is built around Sling’s live TV streaming service. The Sling TV app launches automatically when the device boots, and the remote has handy shortcut buttons for navigating Sling’s menus. While you can certainly access Sling through other devices, none of them make it quite as easy.

Still, anyone who has second thoughts about committing to Sling should look elsewhere. The AirTV Mini and Sling TV are so inextricable that using the streaming device for any other purpose can be a hassle, and your options for alternative live TV services are more limited than they are on other devices. For most Sling subscribers, a Roku player, Amazon Fire TV, or Apple TV will still be better fits.

A streamer for Slingers

Though it’s a bit hefty for a streaming dongle, the AirTV Mini still manages to hang from your television’s HDMI input via a short, rubberized cable. It has a quad-core processor and 2GB of RAM, which is adequate for scrolling smoothly through menus and launching apps without delay. It also supports 4K HDR video in apps like Netflix and YouTube, along with a small amount of HDR10+ content, but it won’t display Dolby Vision HDR. While the dongle only has a single micro-USB port for power, you can use a USB OTG cable to plug in an external USB hard drive or game controller. It also supports Bluetooth for external controllers.

Whenever you boot up the AirTV Mini, it loads directly into Sling TV, whether you’re paying for the live TV service or not. (Read our full Sling TV review here.) The underlying software, however, is Android TV, so you can always hit the remote’s home button to see a menu of other apps, such as Netflix and YouTube. (The Sling TV menu also has its own integration with Netflix, so you can scroll through recommendations or jump into the app without visiting the main app launcher first.)

The remote control is equally Sling-centric. Alongside the usual directional pad and playback control buttons, it has a big blue “Sling” launch button near the top. It also has dedicated buttons for viewing the Sling TV guide, the channel recall menu, and the info screen for whatever’s currently playing. None of these buttons serve any purpose outside the Sling app. 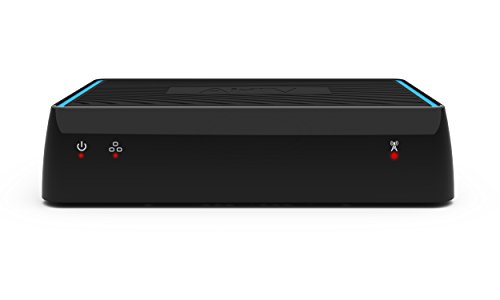 Unlike the AirTV Player from a couple years ago, the AirTV Mini has no full-sized USB ports, so you can’t directly plug in a TV tuner to watch over-the-air channels from an antenna. Instead, you’re supposed to use AirTV’s networked tuner, a separate $80 box that can stream broadcast TV into the Sling app over Wi-Fi. The AirTV tuner supports USB hard drives for recording over-the-air channels as well, so you could potentially have multiple AirTV Mini streamers served by a single tuner and DVR. (I tried connecting the AirTV USB tuner adapter to the Mini through an OTG cable, but this only caused the Sling TV app to reboot without recognizing it. Hauppauge’s USB tuner didn’t work either.)

Taken as a whole, the AirTV system is a convenient way to combine Sling TV, other streaming apps, and optional over-the-air channels. If you’re used to how a cable box launches directly into live TV, with remote shortcuts for most common TV functions, AirTV provides a similar experience. And combining Sling with an antenna remains a great way to save money over other live TV streaming packages. The Sling app on Roku and other devices might provide the same content, but it’ll make you thumb through more menus and click more buttons along the way.

The problem at this point is not so much the AirTV system, but the underlying Sling TV service.

While Sling TV has a lower starting price than most other live TV streaming services ($25 per month for either Sling’s Orange or Blue base packages), it also lacks local channel coverage in most markets, which is a problem if you can’t get those channels through an antenna.

Sling’s corporate parent, Dish Network, also tends to play hardball in its negotiations with TV networks, which is great for keeping prices down but not ideal for maintaining a consistent channel lineup. To wit: Sling hasn’t carried HBO since November, and it dropped regional Fox Sports channels—along with the YES Network in New York—in July. Having hardware that revolves around Sling could be a liability if the service loses more channels.

While we’re nitpicking: Although the AirTV Mini has a Google Assistant button on its remote for voice controls, Sling TV itself doesn’t integrate with Google Assistant. That means you can’t use Google Assistant commands to launch Sling’s live channels or on-demand programming. You can’t even find Sling content in Google’s top-level search results, as you can with PlayStation Vue. The AirTV remote does have a separate microphone button that can tune to live Sling channels or open the TV guide, but this only works while you’re inside the Sling TV app.

Even as a streaming player for other apps besides Sling, the AirTV Mini runs into some of the same problems we’ve seen with other Android TV devices, such as Xiaomi’s Mi Box S.

The built-in Chromecast capabilities, for instance, have a tendency to stop working when the AirTV Mini is asleep, so you must turn on the device with the remote before you can use your phone as the remote instead. The AirTV Mini also lacks support for Amazon Prime Video, and Hulu says it won’t support the device because it doesn’t meet the company’s technical requirements. (Both apps do, at least, work via Chromecast.) As with the Android TV-based JBL Link Bar, PlayStation Vue was unbearably choppy in my experience as well.

If you decide to stop subscribing to Sling TV, the AirTV Mini presents further hassles. You can’t uninstall or disable the Sling TV app, nor can you move it out of the first position in Android TV’s favorite apps list. You can’t stop the device from booting into the Sling TV app, either, and the remote control will suddenly have a lot of useless Sling-specific buttons.

All of which means you really have to be confident in your enjoyment of Sling TV to invest in the AirTV Mini. More than any other streaming device, the AirTV Mini’s Sling-centric remote helps simplify the act of jumping into live channels from Sling, and it even makes launching over-the-air channels easier if you use the separate AirTV tuner.

But one of the great benefits of cord-cutting is the freedom and flexibility to switch between streaming services as needed. In exchange for more convenience around Sling TV, the AirTV Mini hinders your ability to switch to the competition. That’s probably the entire point.

Corrections: An earlier version of this review stated that the AirTV Mini does not support HDR10+, and neglected to mention that the remote’s microphone button, which is separate from its Google Assistant button, supports launching live channels with voice commands in the Sling app.