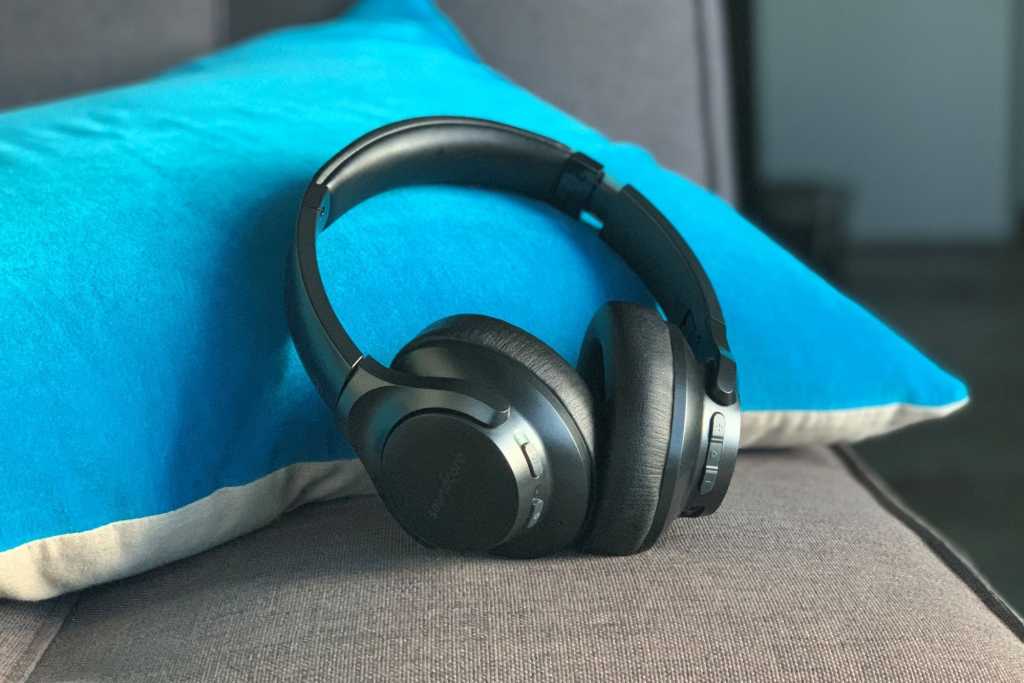 The SoundCore Life Q20 headset surprised us with its rich, lifelike sound and a comfortable fit that allowed for lengthy listening sessions.

Generally speaking, you shouldn’t expect much from a $60 pair of Bluetooth headphones—especially a set that claims to have active noise cancellation—but the SoundCore Life Q20 headset from Anker surprised us with its rich, lifelike sound and a comfortable fit that allowed for lengthy listening sessions.

Active noise cancellation, meanwhile, did a nice job of filtering out lower-range engine and background noise, and we were also impressed by the headset’s battery life. That said, we could do without the overkill of the Life Q20’s bass-boosting “BassUp” feature, while tunes sounded flat (and not in a good way) while listening over a wired connection.

Weighing in at just 9.3 ounces, the SoundCore Life Q20 features an adjustable padded headband with foldable earcups that swivel up to 90 degrees, handy for stashing the headset into a backpack or a purse. The memory foam earcups fit comfortably around my big ears, and the headband never made the top of my head start to ache; indeed, I wore the headphones for several hours straight during a coast-to-coast flight without any pain or discomfort.

The power button sits on the left earcup and doubles as a Bluetooth pairing button when you long-press it. Pressing the second button on the earcup turns on the headset’s noise-cancelling mode, which (according to Anker) is designed to block 90 percent of low- and mid-range noise with help from a quartet of built-in microphones. (We’ll delve deeper into the Life Q20’s noise-cancelling abilities in a moment.)

A volume rocker on the right earcup has an integrated play button that lets you play and pause music and answer calls. You can also engage the headset’s “BassUp” bass-boosting feature by double-pressing the play button, or you can long-press it to summon Siri or Google Assistant. Next to the volume rocker is a Micro-USB charging port and a 3.5mm audio jack for wired listening using the included 3.5mm-to-3.5mm cable.

Overall, the Life Q20 felt a tad flimsy but pleasingly light, and the headset didn’t seem to suffer any ill effects from being stuffed in a backpack that I then shoved under an airline seat.

Pairing the headphones with a device is a simple matter of pressing and holding the power button; I had no trouble pairing the Life Q20 to my iPhone XS, my Dell Latitude laptop, or the Genki Bluetooth adapterRemove non-product link that I use with my Nintendo Switch. There isn’t a button that allows you to quickly switch between your connected devices, but I was able to reconnect my devices to the headphone without having to pair them again.

The range of the Bluetooth 5-enabled headphone was excellent. While connected to my iPhone XS, I was able to walk the length of my office, stroll down a hallway, and then venture a few yards outside before the headphone’s Bluetooth connection finally sputtered out. In all, I was able to roam a little more than 100 feet from my iPhone while wearing the Life Q20.

More importantly, I was pleasantly surprised with the overall sound of these headphones, particularly when listening over its Bluetooth connection. First I queued up the title track of Bruce Springsteen’s The Ghost of Tom Joad, and I was impressed with the detail I heard in The Boss’s subdued vocals and acoustic guitar performance, which is soon followed by some punchy percussion, warm synthesizer, and reedy harmonica. The Life Q20 handled it all with aplomb, delivering a relatively wide soundstage to boot.

I also sampled some solo piano works by Ravel as performed by Valdo Perlemuter for Nimbus Records. Teasing the detail and texture out of a classical solo piano recording can be tricky for any headphones, let alone bargain ones, but the Life Q20 held its own, even when compared side by side with my wired Sony MDR-V6 studio monitors. Let’s put it this way: I wouldn’t have listened to Ravel for a couple of hours on the SoundCore cans if I didn’t like what I was hearing.

For some deep, thumping beats, I teed up Aquasky’s “Bulletproof” track and got a kick out of the punchy yet controlled bass, which never crowded the higher- and mid-range sound. That all changed when I switched on the headset’s “BassUp” mode, however. Designed to boost bass by up to 100 percent, the BassUp feature turned the crisp thumps in “Bulletproof” into overpowering thuds that swamped the rest of the sound. Those who can’t get enough bass might warm to the Life Q20’s BassUp mode, but once I tried it, I never felt the urge to turn BassUp on again.

Much more effective was the headset’s active noise-cancelling feature, which works pretty much as advertised. Press and hold the ANC button, and the headset uses its four integrated microphones to filter out most mid- and low-end ambient sounds. The mode worked great during my cross-country flight, almost completely blocking the deep roar of the jet engines and thus allowing me to enjoy my Ravel in relative peace.

Voices, however, can cut through the noise cancellation, particularly at quieter volumes. That’s a plus if you want to hear, say, announcements from your flight’s captain or a summons from your boss. On the downside, you may also hear nearby chatter, clattering keyboards, and closing doors. Unlike on some higher-end headphones—as we found in our Sony WH-1000XM3 review, for example—there is no mode that purposefully enables you to hear ambient sounds.

While I was pretty happy with the Life Q20’s wireless sound and noise-cancelling features, I was less thrilled by its wired audio performance, which sounded disappointingly hollow and lifeless. Once I turned on noise cancelling, the sound popped back into life, perhaps because the headset’s built-in amplifier kicked back into gear.

Back on the plus side3, the Life Q20’s battery life was solid, with the headset’s voice alerts assuring me that its battery capacity was still “high” even after several days of on-and-off use. For its part, Anker claims that you can wring up to 60 hours of music playback in normal mode or up to 30 hours with active noise cancellation activated.

With its impressive sound, comfy fit, and a battery that keeps going for days, the Anker SoundCore Life Q20 makes for one of the most enticing budget-priced Bluetooth headsets we’ve tested. Active noise cancellation sweetens the deal, although we were bummed by the headset’s so-so sound over its wired connection. Its overbearing BassUp mode, meanwhile, is best left turned off.