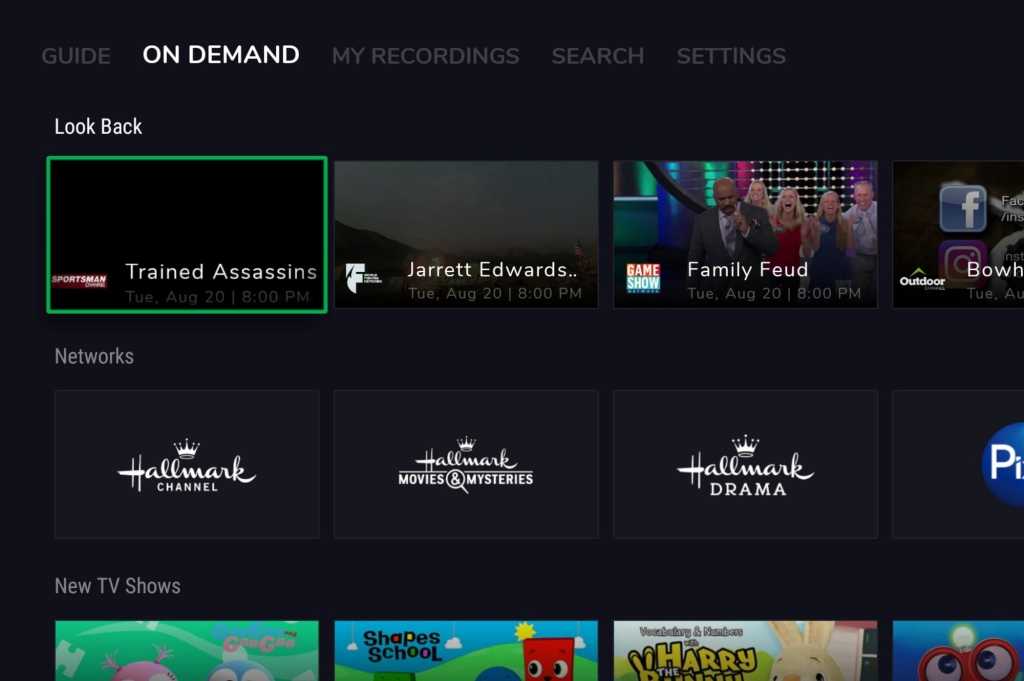 Sometimes just one channel stands in the way of someone cutting the cable TV cord. And given what I’ve heard from readers, it can often be something niche like The Hallmark Channel.

For those prospective cord-cutters, a new streaming called service Frndly TV might be the answer. It starts at $6 per month and has a dozen cable channels, including The Hallmark Channel (plus its Movies & Mysteries and Drama offshoots), The Weather Channel, and Outdoor Channel.

Frndly TV is by far the cheapest and most focused live TV streaming package yet, and while it might not have everything cord-cutters want or need, it could supplement other streaming services and spare folks from getting much more expensive channel bundles. In a perfect world, we’d have a lot more options like it.

What is Frndly TV?

Frndly TV offers three price tiers: The $6-per-month Basic plan streams in standard definition and allows one stream at a time. An $8-per-month Classic plan streams in high definition on up to two devices at once, and it adds 30 days of unlimited cloud DVR storage. There’s also a $10-per-month Premium plan with 90 days of DVR storage and support for up to four streams at a time. Annual pricing is also available: $60 for Basic, $80 for Classic, and $100 for Premium.

As for device support, the app is available on Roku, Fire TV, iOS, Android, and the web.

Loading up the Roku and Fire TV apps, it’s clear that Frndly TV knows its target audience, which mainly skews older and won’t tolerate a drastically different interface than cable. The apps launch directly into live TV, and the main menu is a cable-style grid that shows 10 days of guide data. You can quickly switch channels or flip to your most recent channel while watching live TV.

The DVR can record individual episodes or entire series through the grid guide, and you can look up specific shows in the search section. The service also provides movies and shows on demand, and with all channels you can jump back to the beginning of any live program or view the past three days of programming.

Frndly TV does have some rough edges: The DVR menu quickly becomes unwieldy because it lists all recordings by air date instead of using folders for each show, and the mini guide that you can view during live TV doesn’t show what’s on other channels. Live streams also top out at 30 frames per second, even if you’re paying for better video quality. Overall, though,  Frndly’s apps are easy to navigate and run smoothly.

How Frndly TV came about

I first heard about Frndly TV after reading a report last week on Cord Cutters News, claiming that the service had just launched. Sure enough, it had a slick-looking website, a sign-up form, and apps ready to go on Roku and Amazon Fire TV devices. The only thing missing was any sort of launch fanfare or press release, which is unusual for a new live TV streaming service.

Bassil El-Khatib, Frndly TV’s CEO, said in an interview that the service is in a soft launch as the company gathers feedback and makes sure everything is running smoothly. But this is a legitimate and legal service that has agreements with Crown Media (which owns the Hallmark Channel), The Weather Channel, and others. El-Khatib was previously a vice president at Dish Network and Sling TV, and after leaving the company a few years ago, he realized there was a need for a family-friendly streaming service that cost less than other live TV packages.

“All the current [streaming bundles] out there—Sling TV, Hulu live TV, and so forth—they’re all trying to be everything for everyone,” El-Khatib said. “That presents an opportunity where you can look at segments of customers and really address their needs at a much more cost-effective price.”

As for the networks, El-Khatib said they see Frndly TV as a way to win back cord-cutters, who might’ve stopped getting those networks’ channels after dropping traditional TV service.

“People are cutting the cord, and it’s not that they don’t like the content. There are a lot of people who love the content,” he said. “It’s just that there’s not a cost-effective way for them to get that content.”

It’s worth noting that many of Frndly TV’s channels either aren’t included in live TV streaming services or are relegated to expensive price tiers. The Hallmark Channel, for instance, isn’t available through Hulu with Live TV (which now has an estimated 2.4 million subscribers) or YouTube TV (which reportedly passed the 1-million mark six months ago). The Weather Channel is only available through FuboTV. Outdoor Channel and Sportsman Channel are also limited to FuboTV and require a $5-per-month add-on.

Between those exclusions and the decline of cable and satellite TV, companies like Crown Media might be eager for new ways to distribute their channels, even if they involve breaking out of larger bundles. Besides, there’s a common thread of heartland appeal to most of the channels Frndly TV is offering.

Just don’t expect this to become a trend. Major media companies such as Disney, Viacom, and WarnerMedia each own many more channels than smaller players like Crown Media, and they haven’t been willing to break those channels up into more focused packages. While they are investing in new streaming services (such as Disney+ and HBO Max) their goal is to have tens of millions of subscribers and compete with Netflix.

“All the major players, obviously, they have to do things that are on a larger scale,” he said. “For us, the difference is knowing we’re not going to get 10 million customers.”

Even so, Frndly TV could be a subtle disruptor of larger pay TV packages. As more people slice and dice television into a small number of less expensive streaming services, Frndly TV could allow them to abandon many of the channels they’d been paying for previously, but weren’t watching. Some customers might not even need another channel bundle at all.

“This plus an OTA antenna,” El-Khatib said, “addresses quite a lot of our customers’ needs.”