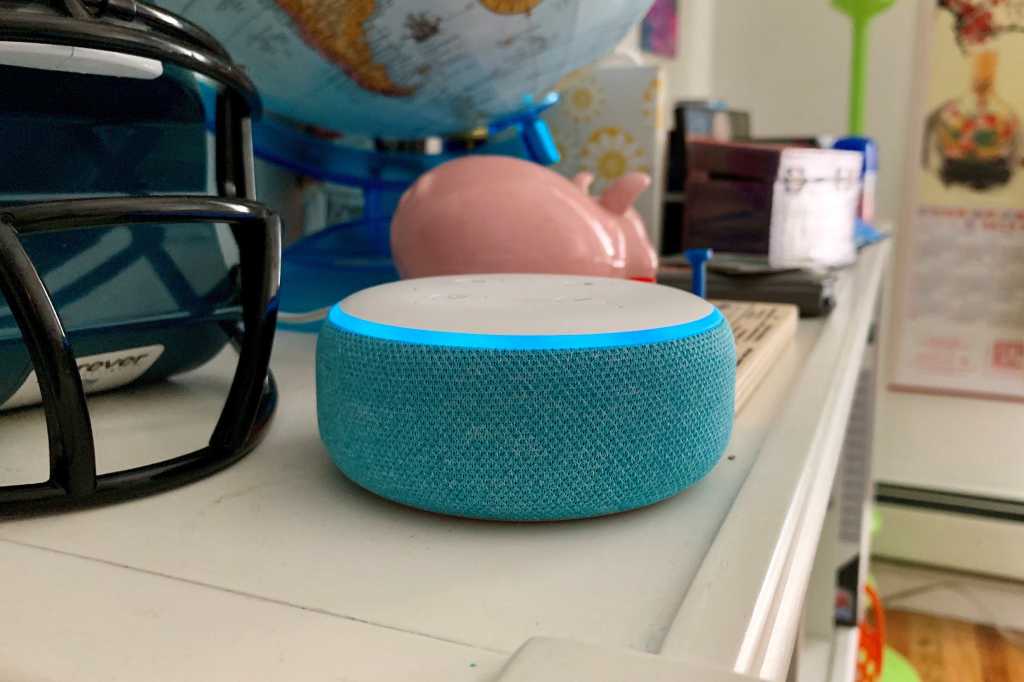 If you’re looking for an alternative to unleashing your kids on an iPad when you need a few precious moments to yourself, the Amazon Echo Dot Kids Edition makes for an attentive and surprisingly engaging electronic companion.

If you’re looking for an alternative to unleashing your kids on an iPad when you need a few precious moments to yourself, the Amazon Echo Dot Kids Edition makes for an attentive and surprisingly engaging companion. Loaded up with parental controls aplenty and packed to the gills with games and “skills,” the Alexa-powered Echo Kids Edition keeps children entertained while spurring their imaginations, all with you in control.

The $70 Echo Dot Kids Edition is, for all intents and purposes, the same device as the 3rd-generation Echo Dot, but it comes with a one-year subscription to FreeTime, an Amazon service that boasts parental controls, thousands of Audible books, hundreds of Alexa games and kid-friendly skills, and ad-free tunes on Amazon Music.

The FreeTime bundle is a $36 value ($60 for non-Prime members), so given that the standard Echo Dot costs $50 (although it’s frequently on sale for much less), ponying up for the Kids Edition can save you some cash. Also, keep in mind that a FreeTime subscription includes thousands of books and videos that you can access on an Amazon Fire tablet, a Kindle, or an iOS or Android device. Finally, the Echo Dot Kids Edition comes with a two-year warranty, versus just 90 days for the standard Echo Dot.

If you already have a 3rd-generation Echo Dot, you’ll already know what to expect from the Echo Dot Kids Edition, at least on the hardware side of things. Basically a 1.7-inch-thick hockey puck of a speaker, both the standard Echo Dot and the kids version come with 1.6-inch full-range speakers, a fabric-covered circumference, and a quartet of buttons on top that let you control the volume, turn off the microphone, and perform actions such as silencing alarms and setting up Wi-Fi. A thin, halo-shaped LED indicator lets you know when Alexa is listening, has waiting notifications, or has lost its wireless connection.

Indeed, the only real physical difference between the standard Echo Dot and the Kids Edition is the color selection, and surprisingly, the Kids Edition offers only two choices: rainbow and blue. While the 1443243rainbow-colored Echo Dot is the more eye-catching of the two, we chose blue because that’s my daughter’s favorite color (or at least it was on the day we picked it).

The initial setup process for the Kids Edition is the same as for a vanilla Echo Dot: you plug the device into a power outlet, wait for the halo to glow orange, fire up the Alexa mobile app, and then use the app to “discover” the Dot and connect it to your Wi-Fi network. I had the Echo Dot Kids Edition up and running within a couple of minutes.

Once you have the Kids Edition connected to your Wi-Fi network, it’s time to configure FreeTime’s parental controls. Open the FreeTime Parent Dashboard in the Alexa mobile app and you’ll find entries for your kids (which was pre-populated in my case, given that the all-knowing Amazon already knows the name of my seven-year-old daughter), and tapping an entry lets you start tinkering with the various parental settings.

Among the available options in the Parent Dashboard is the ability to set daily time limits (you can program weekdays and weekends separately). I went ahead and choose 8 a.m. and 8 p.m. as the time limits for my daughter Claire, which means if she tries to summon Alexa at, say, 8:05 p.m., Alexa will patiently say “Sorry, I can’t play right now; try again later.” Naturally, my daughter tends to keep nagging Alexa for some post-bedtime fun, but after a few fruitless attempts, she generally gives up and puts her head down.

The Parent Dashboard lets you block the ability to control any of your connected smart home devices, as well as turn on an explicit language filter for music. The language filter is supposed to work for any connected music services that support the feature, including Spotify, Pandora, Apple Music, and (of course) Amazon Music, while any music services that don’t support a filter are blocked.

That’s all well and good, except for the time my daughter was playing a Soulja Boy shuffle (Soulja Boy being a popular music choice at summer camp this year, along with the ubiquitous Lil Nas X), and on one of the tracks, someone let loose with a hearty four-syllable invective—whoops. My kid and I exchanged an amused look (hey, she’s heard worse) and kept on dancing. That was the only time I heard any bad words slip by FreeTime’s explicit language filter, so it might have been simply a random and rare glitch, but it’s worth mentioning.

The Dashboard also lets you control whether your kid can use Alexa’s messaging, Drop In, and Announce features. For the Drop In and Announce features, your child can only listen in on or make announcements over other Echo devices in your household, while messaging is restricted to the contacts you’ve specified (Mommy and Daddy, in Claire’s case). I should note that as a parent, Drop In is one of the more delightful features of the Kids Edition, allowing me to summon my daughter with curt commands such as “Claire, report to me immediately.”

Finally, you can pause your child’s Echo Dot within the Dashboard by tapping a button and choosing how long the Alexa “time-out” will last. It’s an essential feature for when your kid’s Alexa usage heads into frenzied territory, but I wish it were easier to access; as it stands, it takes at least four taps to get to it.

Beyond its various parental controls, Amazon’s FreeTime service offers thousands of Audible books and scores of premium skills tailored for kids, not to mention the run of Amazon Music.

Before we get to the games and the books, however, let’s talk more about music, because dollars to donuts, that’s what your kids will be doing with Alexa most of the time: playing their favorite tunes. This being the summer of 2019, my daughter’s number-one request has been for “Old Town Road,” a song that is now burned into my brain for all eternity. Coming in a close second is the Star Wars soundtrack, followed by Bruno Mars’ “Uptown Funk You Up.”

While my daughter got an undeniable kick out of using her Echo Dot as a voice-activated jukebox, she often grew annoyed when Alexa picked the wrong song, or selected a cover of a track rather than the original. (Perhaps this was FreeTime’s explicit language filter at work.) For the most part, though, asking Alexa to play music was a big hit—so big, in fact, that I regularly used FreeTime’s “pause” feature to give myself and Claire’s mother a break.

Then there are Alexa’s hundreds of kids-oriented skills, which run the gamut from a bare-bones version of hide-and-seek to some impressively produced “Choose Your Own Adventure”-style reading games from Audible.

Basic though it was, the Hide and Seek skill proved to be a popular choice, mainly because it was so easy to win. The game starts when Alexa asks your kid to choose a hiding space; once your little one is hiding, Alexa starts to guess where your child is, and if she can’t guess correctly in three tries, she gives up. There aren’t any sensors or machine-learning technology involved when Alexa plays hide-and-seek; instead, Alexa’s strategy revolves around wild guesses, such as “Are you behind the dollhouse?” (No, because Claire doesn’t have a dollhouse.) Sure, Alexa’s version of hide-and-seek is a tad dull, but for my daughter, winning never gets old.

Another game that proved a hit was Master Swords, in which you clash blades with pirates by spelling words. When you battle a bad guy, you must spell a word (like “right” or “forest”) correctly to make your blows land; if you get a word wrong, you miss. It’s challenging, fun, well acted, and stuffed with sound effects, although Claire would occasionally grow frustrated (“That’s weird!”) when the game cut her off before she could finish spelling a word.

We also enjoyed the classic Choose Your Own Adventure books on Audible (such as Space and Beyond), which involve listening to a story and then making decisions about what to do next at key points in the action. As with Master Swords, the Choose Your Own Adventure books we listened to were slickly produced, featured seasoned voice actors, and included evocative sound effects. Still, frustration crept in when Alexa occasionally misheard Claire’s directions and (for example) shot our character out of an airlock rather than opting to stay within the confines of the starship.

Best of all was Star Wars: Choose Your Destiny, another choose-your-adventure game that my Star Wars-obsessed tyke found riveting. In the particular story we tried (you can pick between big adventures and “mini” adventures, by the way), Han Solo and Chewbacca had to run an Imperial blockade because they were, um…. OK, does it matter? In any case, Claire was clearly engaged, instructing Chewie to repair the hyperdrive and ordering Han to run for cover rather than blindly charging ahead with his blaster. Once more, enthusiastic acting along with authentic Star Wars music and sound effects paid major dividends when it came to holding Claire’s interest.

Of course, we’re only scratching the surface of Alexa’s various kids-oriented skills—and indeed, if your kids are looking for a new activity, they can always just say “Alexa, let’s play,” and Alexa will pick a game to try; indeed, that’s how we found Master Swords in the first place.

My daughter declared the Amazon Echo Dot Kids Edition a keeper, and I’m inclined to agree. Entertaining without becoming disruptive, educational without veering into boring territory, the Echo Dot Kids Edition managed to keep my easily distracted second-grader engaged but rarely spun her into a frenzy, while letting me control how and when she could play with her new digital friend.