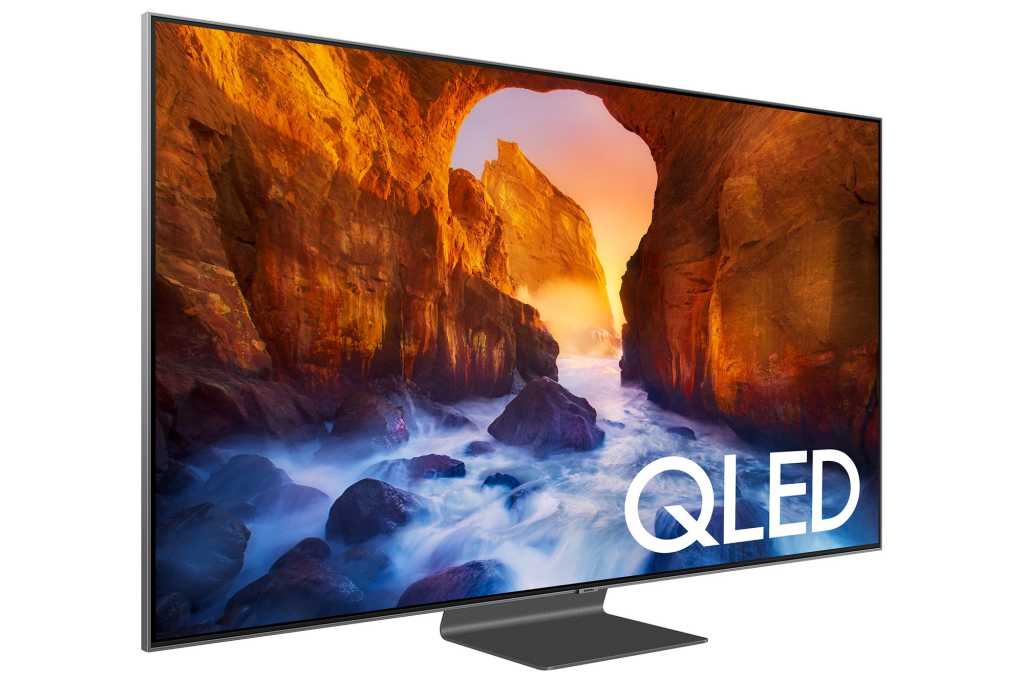 One of the best 4K UHD TVs available, the Q90R has been eclipsed as Samsung’s top of the line smart TV by the 8K UHD Q900. But you’ll pay a lot more for a Q900 of similar size. We also think last year’s Q8F will be a very good deal (if you can still find one) and this year’s Q80 series (which we haven’t seen yet) might deliver even better overall image quality. But you won’t find a brighter 4K TV than the Q90R.

Samsung’s Q90R is a great TV. It’s super bright, has amazingly accurate color, and it makes HDR pop and details sing—much like its Q9F predecessor. The recently reviewed Samsung Q900 8K UHD QLED TV, however, raised the bar for low-defect LED-backlit LCD image processing, and the 4K Q90R doesn’t quite clear it.

The most obvious new feature of the Q90R—and my favorite by far—is its pedestal-style stand. Think iMac and you’ve got the idea. It looks great, and allows you to set the TV on a much smaller surface compared to TVs that have feet at the far ends of the chassis. Though it’s only about a foot deep, and a little wider than that, it’s a lot more stable than you might think.  (Okay, more than I thought it would be.) The stand is rather heavy at around 14 pounds—be prepared for that when you make that first tug to remove it from the box.

The Q90R is a 4K UHD (3840 x 2160) display. I tested the 64.5-inch (65-inch class) version which costs a not inconsiderable $2,800. Like all of Samsung’s pricier TVs, it utilizes Samsung’s One Connect breakout box, which houses all the ports, the power supply, and most of the processing power. It attaches to the Q90R via a single optical cable, hence the moniker.

The One Connect’s ports include four HDMI 2.0 (plus 2.1 bandwidth on one), optical S/PDIF digital audio out, a coax connector, three USB ports on the side, plus Ethernet and RS-232C. There’s an 802.11ac Wi-Fi adapter and Bluetooth 5.0 radio onboard as well. The remote relies on the latter plus infrared for power on/power off.

The Q90R weighs approximately 63 pounds without the stand, but because the ports and circuitry are in the 6-pound, 15.5 x 5.2 x 2.5-inch One Connect box, the TV measures a mere 1.6 inches thick at its thickest. The frame of the Q90R is also very thin and essentially disappears when you start viewing.

Software features include an improved ambient mode, which allows you to upload a digital photo that matches the wall behind the TV, seemingly rendering the TV’s screen transparent. Alternatively, you can display digital photos or works of art as though the TV was a picture frame.

The TV supports Samsung’s own Bixby digital assistant, plus the two you might actually use: Amazon Alexa and Google Assistant. Siri doesn’t make an appearance, but there is an Apple TV app, plus support for Apple’s AirPlay 2 multi-room audio tech.

FreeSync technology reduces input lag when you use the TV with a videogame console. A universal program guide remembers your content choices and recommends programs that it predicts you’ll like.

You’ll see a lot of terminology like “Quantum HDR 16X” on Samsung’s site. That particular slice of baloney means there’s a lot of peak brightness. All this marketing drivel is indicative of something good, it’s just nonsensical technically. So ignore it, or operate on the theory that given the same faux term, the higher number is better. You can apply that principle to other TV vendors as well.

Normally I skip over TV setup, as you’ll likely only experience it once and generally speaking, all the vendors do a very good job with it. But Samsung’s is just a step classier, so I thought I’d call it out. What impressed me most was that it starts channel scanning the minute it has enough info, and it lets you carry on with the setup while the scan is in progress—for a couple of steps anyway. It’s about as painless as it gets.

Samsung’s Smart Hub onscreen user interface is largely the same row of icons at the bottom of the screen it’s been for a couple of years now; nicely organized, customizable, and and easy to navigate. But I’m still waiting for the company to return you to the place you left off on subsequent accesses.

The settings menu is separate, appearing opaquely mid-screen, and is generally easy to use. It would be easier yet if you could alter settings without having to press enter/okay first. As I, and I’m guessing most users, simply set things and forget about it, that’s a picayune nit.

The One Remote universal remote control (model TM1950C) is as elegant as always, but instead of adding dedicated transport controls for playback of streaming services, USB content, and so on, Samsung opted instead for advertising/shortcut buttons for Netflix, Amazon Prime, and Hulu. Some might find them useful. I find them a waste of space and a yet another reminder that money reigns supreme in modern culture (that’s assuming that the companies represented on the buttons paid Samsung for the placement). I expected this on the much cheaper RU8000, where the profit margins are thinner, but not on the high-end Q90R.

(Please ignore all the ads on this webpage. Then again, you didn’t pay to read this.)

First viewing of the Q90R, especially with HDR, is a wow experience. There’s super accurate and rich quantum dot color, plus more than 1,300 nits peak brightness. Because of the brightness, the Q90R renders HDR as well as any currently available TV on the planet. Vizio’s 3,000-nit P-Series Quantum X might be the exception, but I haven’t gotten one in house yet.

Samsung is nigh on fanatical about high contrast in areas of detail, and the approach works extremely well with most material. There’s a bit of a dark side to the obsession with sharply delineated detail, however; a large amount of moiré/shimmer/distortion when you start panning or moving it. To be fair, the Q90R is no worse than last year’s Q9F in this regard, but as I said up top, I’ve now seen the Samsung Q900 8K TV, which proves that these artifacts can be reduced to negligible levels. I was expecting the same reduction in artifacts with the Q90R, and not finding it was disappointing.

Screen uniformity on the Q90R is very good, though I could see very faint clouding at the edges of a pure white screen. The usable off-axis viewing angles, on the other hand, are so wide that you basically lose the sense of the picture before you see artifacts. Samsung has done an excellent job with the Q90R in that department. Last year’s was good, but this year’s is significantly better.

The array back-lighting, which is said to be improved for this year, worked quite well with all the real-world material I threw at it, creating as nice a black as you’ll currently see from an LED-backlit LCD TV. There is the occasional noticeable artifact however, such as a tiny lag turning off the unneeded zones when a very large black area first appears. There’s also a very noticeable zone transition issue with a white box traveling along the edges of a black screen (look up “backlighting array zone counter” on the web). That was a bit of a surprise as I saw hardly any of this from, yup, the Q900.

Note that I’m using a fine-tooth comb in this discussion of the Q90R’s processing and image rendering. Under normal viewing, with the average movie or TV show, you might never notice the defects I’ve discussed. This TV generates a very, very nice picture.

The Q90R is an excellent LED-backlit LCD TV, but it’s no longer a state-of-the-art LED-backlit LCD TV. As we’re talking high-priced spreads here, if you’re considering paying $2,800 for a 65-inch TV, you might consider paying $2,500 for a smaller (55-inch-class) Q900, which, in addition to being a future-proof (near future, anyway) 8K TV, offers the best 4K image I’ve ever seen thanks to some pretty effective up-scaling. If you’re unwilling to give up any screen real estate, Best Buy sells the 65-inch-class Q900 for $3,500.

I haven’t seen a Q80R, but if it’s anything like last year’s less-obsessed-with-brightness, fewer-artifacts Q8F, you might consider saving $800 and go for that. After careful viewing to confirm my theory, that is.

Finally, while the Q90R has some attractive new features in the software area, the image is really only marginally improved over last year’s Q9F. Aside from the admittedly useful and attractive pedestal stand, we’re basically talking tweaks. That means, if you get a deal on a 2018 Samsung QLED, you should strongly consider taking advantage. Then of course, there’s always OLED.

I’m paid to offer alternatives, but you’ll no doubt be very pleased if you opt for the Q90R.

Updated September 16, 2019 to report that the Samsung Q90R’s HDMI ports are a partial implementation of the HDMI 2.1 standard.

Updated September 28, 2019 to correct mention of Q90R’s smaller than 49-inches not supporting FreeSync. The smallest Q90R available is 55-inches.