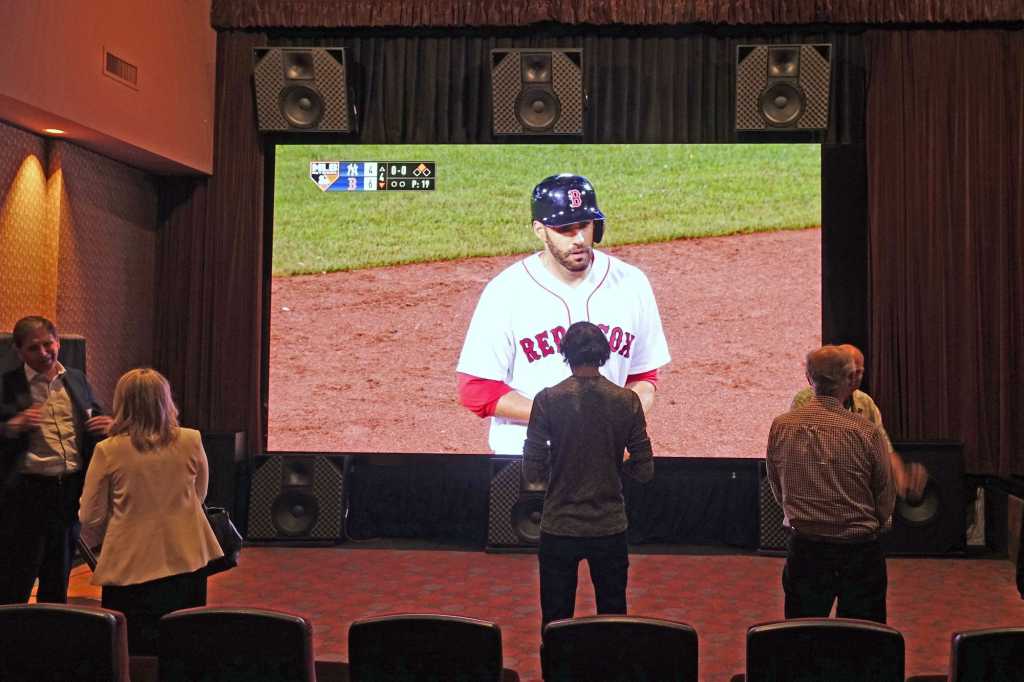 TechHive got its first look at Micro LED technology when Samsung demoed their version at CES in January, 2018. Last week, Sony Pictures invited me to attend a screening of Men in Black: International at one of the screening rooms in the Jimmy Stewart Building located on the studio’s main lot in Culver City, CA. That was cool enough, but when I learned that the screening would be presented on Sony’s CLED (Crystal LED) display in high dynamic range, I got much more excited.

CLED is Sony’s version of a Micro LED display. The basic principle is quite simple: Each pixel is formed by a cluster of three tiny LEDs—red, green, and blue. Thus, Micro LED is an emissive display technology like OLED. But Micro LED can get much brighter than OLED, making it ideal for reproducing HDR images.

In addition to very high brightness, Micro LED can achieve super-deep black levels, because the LEDs can be individually and instantaneously dimmed or turned off as needed. The Sony CLED goes even further, placing the LEDs for each pixel at the center of a black cell. In fact, the three LEDs together measure a mere 0.003 square millimeters in area and occupy only 1 percent of the area of each cell—the other 99 percent is pure black. In addition to producing great blacks, this design minimizes reflections of ambient light and also provides a very wide viewing angle.

The end result is a claimed contrast ratio of more than 1,000,000:1, with a peak brightness of 1,000 nits. Even more impressive, the entire screen can emit 1,000 nits, unlike virtually all other types of displays, which reduce the amount of light they emit as more of the screen is asked to produce maximum light output.

Regarding color, the Sony CLED claims to reproduce 140 percent of sRGB, which is roughly 100 percent of DCI/P3. It also supports 10-bit color and frame rates up to 120fps.

One hallmark of Micro LED displays is their tiled construction. A complete screen consists of many tiles or modules linked together, so the final screen can be just about any size. Amazingly, the seams between tiles are completely invisible most of the time. They can be seen—barely—under certain conditions, such as when the display is turned off and bright lights are shining on it, but I’ve never seen them when watching video content.

Each Sony CLED tile, dubbed ZRD-2, measures about 16 x 18 x 4 inches (WxHxD) and houses 320 x 360 pixels with a pixel pitch of 1.26mm. The tiles are mounted in a larger frame and laser-aligned to form a continuous, seamless screen.

Because the pixel pitch is fixed, the final resolution depends on how many tiles are used—in other words, the larger the screen, the higher the resolution. The headquarters of beauty company Shiseido in Yokohama, Japan, has a CLED screen measuring 66 x 18 feet with a resolution of 16K x 4K.

The CLED screen we saw measures 16.5 x 9 feet with a resolution of 4096 x 2160, using a total of 78 ZRD-2 tiles and two ZRCT-200 controllers. According to our host, Sony Pictures executive VP and CTO Don Eklund, the peak light output of the screening we were about to see was 800 nits, and the contrast ratio was “only” 100,000:1. Even with these less-than-maximum specs, the screen consumes up to 7 kilowatts of power!

The audio system is equally interesting. Because the screen is not acoustically transparent, speakers can’t be placed behind it. Instead, there are three speakers above the screen and three more below it, and some sophisticated digital signal processing makes the sound appear to come from the screen itself. This was surprisingly successful to my ears. The six front speakers, two subwoofers, and DSP were provided by QSC, while existing surround speakers in the room completed the 5.1 system.

The movie itself was sourced from the home-video HDR10 master with a peak brightness of 1,200 or 1,300 nits. The brightest highlights were lowered to 800 nits for this screening using a common color-correction system called DaVinci Resolve, but the rest of the brightness levels were left alone. The final file was encoded as a DCP (Digital Cinema Package) using HDR10 and played from a DCP server.

Before the screening started, Don told us about one more modification they made to this particular movie file—its frame rate was 48fps (frames per second), twice the normal cinematic rate. Why was that? After all, the movie was shot at 24fps.

It turns out that judder—stuttering in the appearance of moving objects and camera pans endemic to 24fps capture—becomes much more objectionable when the overall brightness is a lot higher than usual. This is a human perceptual effect that has nothing to do with the process of making a movie (other than using a relatively low frame rate). So, some of the brighter scenes were “motion graded” to reduce the appearance of judder.

Motion grading is a sophisticated form of frame interpolation without the dreaded soap-opera effect (SOE) that makes movies sent to the display at 24fps look like video, which is generally shot at 30fps. Sony used a software package called TrueCut by Pixelworks, which provides controls to adjust the amount of judder, blur, and frame-rate “feel” (24fps in this case to avoid SOE) while doubling the actual frame rate in the process. The unprocessed portions of the movie were simply frame doubled so the entire file was 48fps.

With a resolution is 4096×2160, the screen’s aspect ratio is 1.83:1. The movie’s aspect ratio is 1.85:1, so it used virtually all of the screen. Of course, the home-video master has a horizontal resolution of 3840, which was scaled to 4096 for this special screening. I would expect that to soften the image a bit, but I didn’t notice anything of the sort; it looked razor sharp to me. This was also done in DaVinci Resolve, which provides excellent upscaling.

When the lights went out and the movie started, it was immediately apparent that this screening would be something special. Early on, there was a momentary full-screen white interstitial, and it was intensely bright. In fact, the overall brightness of the movie was very high, especially in the scenes shot in a white room at MIB headquarters and the desert near Marrakech.

Of course, there are dark scenes as well; for example, night shots over the London cityscape with bright points of lights in the buildings. In these scenes, the black of night was exceptionally deep, while the pinpoint lights were quite bright with no haloing as you might see on a FALD (full array, local dimming) LCD display. In addition, the one or two full-screen black interstitials were essentially perfect, causing the screen to completely disappear in the dark screening room.

Even though portions of the movie had been motion graded, I still saw much more judder and motion blur in bright scenes than I usually do. As I mentioned earlier, a few of the brightest scenes were motion graded, but that accounted for a total of only 18 minutes of the movie because the team had very limited time to do it before this screening.

After the movie, they played a few clips before and after motion grading, so we could see the difference. It was obvious that the process greatly improved the judder, but it was not perfect. And I assume that some bright scenes were not motion graded, which led to much more visible judder in those scenes.

Overall, however, the image was absolutely stunning. Brightness, black level, color, and detail were all extraordinary, spoiling me for conventional cinema presentations—even Dolby Cinema, which is otherwise my favorite. With the brightness of an HDR-capable LCD TV and the black levels of OLED, CLED offers the best of both worlds and far more than any projection-based display.

As a relatively new technology, CLED is quite expensive—roughly $10,000 per module, bringing the price tag for the 78-module screen we were watching to around $780,000. That’s a lot of dough, so it’s unclear if and when it will be installed in commercial cinemas. Will exhibitors be able to afford it and recoup the expense in a reasonable time frame? Will Sony help subsidize it as many major studios subsidized the transition from film to digital projection? We shall see. Then there’s the possibility of installing CLED in homes, but that will remain the purview of the super-wealthy for quite some time, I’m sure.

Speaking of home installations, we also saw a bit of baseball recorded from DirecTV in UHD and HLG HDR. Like the movie, the images were absolutely gorgeous. I didn’t notice nearly as much judder in these images, perhaps because they were shot at 60fps. Also, a few shots were from HD/SDR cameras, and the difference was obvious, even with good upscaling.

It’s clear to me that Micro LED in general, and Sony’s CLED in particular, represents the future of video displays. This technology offers true HDR and super-high resolution on very large screens, opening the door to almost limitless possibilities. I eagerly look forward to seeing it in commercial cinemas and home installations.