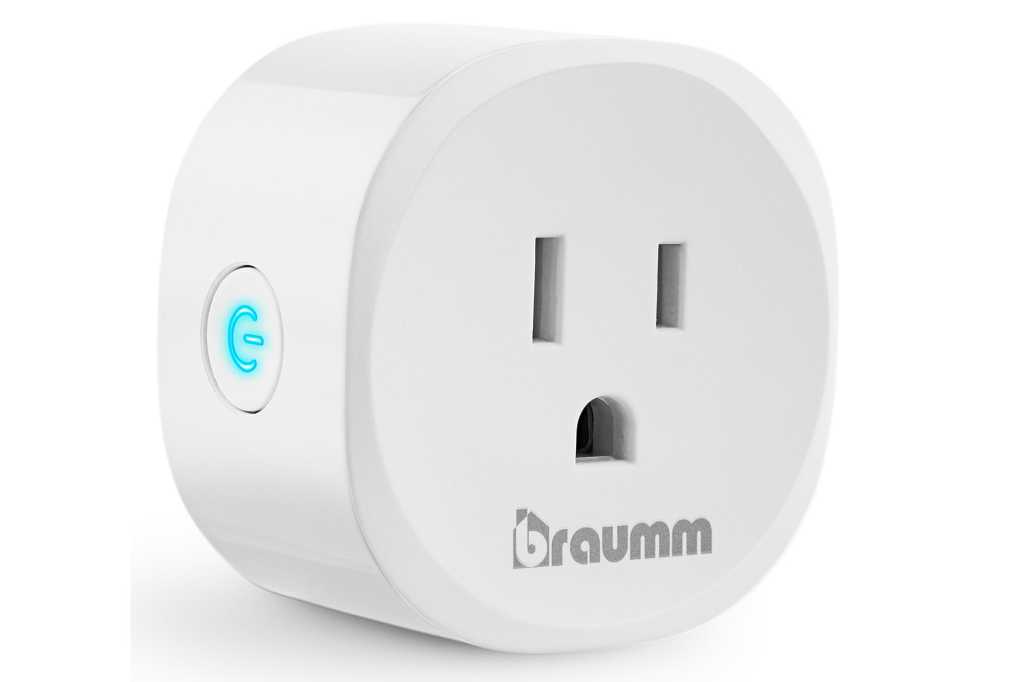 This generic smart plug works well enough to justify its low price tag, but shop around and you might find a better product for even less.

A little, round, white smart plug that connects directly to your Wi-Fi network and barely costs a ten-spot? Stop me if you’ve heard this one before—because, well, you probably have. Braumm is the latest brand in the generic Wi-Fi smart-home gear space, and its smart plug has one major thing going for it: It’s dirt cheap.

This familiar-looking single-socket add-on plug slots in simply to an existing outlet. But if used in the bottom outlet on a duplex wall plate, it will block part of the upper outlet. In other words, you won’t be able to use two of these with a single receptacle. A sizable power button on the left side of the device lets you quickly turn the socket on and off, but otherwise the miniaturized hockey puck offers no frills at all, unless you include the enormous “Braumm” logo on the front of the plug.

Setup follows an extremely familiar routine because, well, the mobile app is also a clone of any other number of products, including those from Xiaomi and iClever. Setup involves putting the Braumm plug into pairing mode, scanning for the new product, and then tying it to your existing Wi-Fi network. To Braumm’s credit, I had no trouble with this process (unlike the buggy Xiaomi plug) and was able to get things running within a few minutes.

Within the app, an equally oversized power button lets you turn the socket on and off, and a simple timer and scheduling system are also on tap. Like iClever, a local weather-reporting system is also built into the app, which lets you automate things like turning the plug off if the elements become rainy. That said, Braumm’s “Smart” automation system is a bit undercooked and more complex than it needs to be—though you’re advised to invest in higher-end hardware if you’re looking to get fancy with your smart home.

I’m less enamored with Braumm’s instruction manual, which comes as a folded strip of paper wedged underneath the plug in the ring-box-sized package. The manual is only marginally complete, awkwardly written, and certain instructions don’t even jibe with Braumm’s hardware or software. Whether the manual was simply copied from another product or was designed for an older version of it is tough to say.

At $14 (on Amazon at press time), I thought the price would be hard to beat, making it easy to merit consideration—especially if you also want to install an in-wall smart switch or two (since not all smart plug manufacturers offer both). But if you need a simple smart plug without many (or any) frills, the better iClever Wi-Fi Mini Outlet was selling for just $12 on Amazon when this story was scheduled for publication.