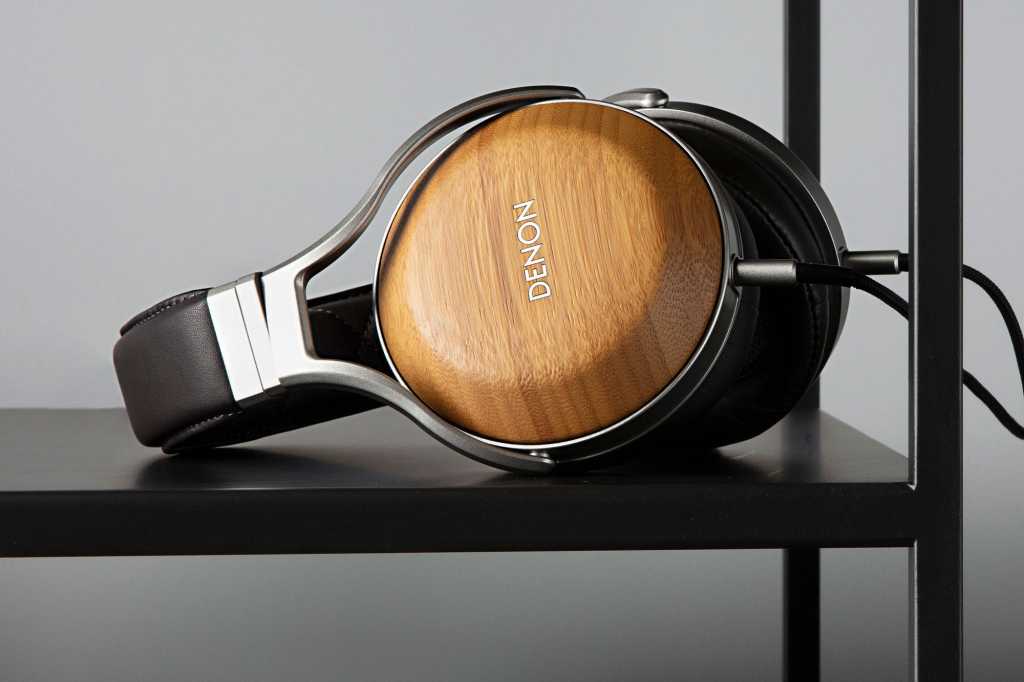 Exceptional sound and build quality make this a worthy flagship for Denon’s line of well-regarded headphones.

Headphones offer several advantages over speaker systems. Perhaps most importantly, they remove the acoustic effects of the room, providing a more consistent and predictable listening experience. As a result, headphones continue to inspire a thriving hobbyist community.

Denon has been making highly regarded headphones for more than 50 years, and the AH-D9200 is the company’s latest flagship model. I reviewed it using Denon’s PMA-60 two-channel integrated amplifier, a combo that makes beautiful music together.

The AH-D9200 is a circumaural (over-ear), closed-back design handcrafted with premium materials. For example, the outer casing of each earcup is made from bamboo, which is said to have natural acoustic properties that greatly reduce unwanted resonances and promote a rich, warm tone. In addition, the memory-foam earpads are clad in engineered leather for maximum comfort over long listening sessions.

A diecast-aluminum hanger provides sturdy support and flexibility, allowing the earcups to move freely around two axes for maximum comfort on a wide variety of head sizes and shapes. Comfort is also enhanced by the headband, which is wrapped in genuine leather. But despite the use of such high-end materials, the AH-D9200 weighs only 375 grams (13.23 ounces).

Each earcup houses a 50mm free-edge diaphragm made from nanofiber materials chosen for rigidity and low mass. The diaphragm is mounted in a vibration-reducing engineered-resin baffle with a soft surround material that makes it easier to move in response to the music signal without flexing or distorting. This design is said to cancel out resonances in the diaphragm.

With a specified impedance of 24 ohms and a sensitivity of 105dB/mW, the frequency response extends from 5Hz to 56kHz with a maximum power handling of 1800mW. The neodymium magnet boasts a huge magnetic field strength of more than 1 tesla, which is said to drive the diaphragm with lower distortion and reduced vibration. To put this in perspective, most medical MRI machines have a magnetic field strength of 1.5 teslas, while Earth’s magnetic field is in the range of 25 to 65 microteslas at the surface.

The AH-D9200 comes with two detachable OFC (oxygen-free copper) cables, both of which connect to the two earcups with 3.5mm plugs. The copper wires in the 3-meter cable are silver-coated for higher conductivity, and the cable terminates with a 6.3mm (1/4-inch) plug for a home stereo system. The wires in the 1.3m cable are not silver-coated, and it terminates with a 3.5mm plug for portable devices. The shorter cable also includes a 1/4-inch adapter.

The included storage case and cleaning cloth help keep the headphones safe and pristine. Unfortunately, it’s somewhat flimsy cardboard. I would expect a more substantial case at this price.

To drive the AH-D9200, I used Denon’s PMA-60 two-channel integrated amplifier ($599), though many other amps would work well with these headphones. The PMA-60 includes a dedicated headphone-amp circuit that features a high-speed, low-distortion, wideband op amp paired with a fully discrete final output stage. It even offers an adjustable headphone-amp gain control with low, medium, and high settings. This control defaults to medium; the high setting introduced a bit of hiss, so I left it at medium.

For most of my listening, I played DVD-Audio and SACD discs on an Oppo UDP-203 universal player. The player’s optical and coax digital-audio outputs downsample high-resolution audio, so I used the left and right analog outputs, connecting them to the amp’s aux input with a 1-meter AudioQuest Emerald stereo cable with RCA plugs on both ends.

My favorite high-res audio recordings come from AIX Records, which releases its titles on DVD-Audio and Blu-ray discs with 2-channel and 5.1-channel mixes and a PCM resolution of 96kHz/24 bits. I started with the 2-channel mix of Bach’s Brandenburg Concerto No. 5 in D Major, First Movement: Allegro, as performed by the George Enescu Philharmonic Orchestra under the direction of Cristian Mandeal. The sound was gorgeous—rich, full, and open. Each solo instrument and section of the orchestra was clearly rendered, allowing me to hear deep into the mix.

Next, I listened to several tracks from an AIX demo disc called A High-Resolution Audio Experience, which includes a wide variety of genres. Sticking with classical for the moment, I checked out Chopin’s Nocturne in D Flat major as performed by Roberto Prosseda on the album Chopin: Selected Works. The solo piano was rendered beautifully; it sounded exceptionally clean throughout the frequency range with excellent dynamic range.

For classical vocals, I listened to “Now is the Month of Maying” from the album Voices Unbound, by Zephyr, a mixed a cappella choir. The voices all sounded entirely natural, and it was easy to hear each voice in the ensemble.

In the folk realm, I played “Mosaic” from Laurence Juber’s album Guitar Noir and “Ocean” from Jonathan McEuen’s One Step Ahead. In both cases, the acoustic guitar and acoustic bass sounded wonderful, very rich and lush without any hint of congestion. Likewise, Jonathan McEuen’s vocal sound was completely natural.

Turning to jazz, I checked out “Yo Go Jo Po” from the album Odd Men In by the Emil Richards & Joe Porcaro Big Band. I’ve played in a lot of big bands, and the sound of this recording on the AH-D9200 is definitely right. I could hear each section clearly, and the solos were super clean and right up front where they should be. The same was true with “The Very Thought of You” as sung by Manhattan Transfer alum Cheryl Bentyne on her album Among Friends. The sound of her beautiful voice was very intimate, and the piano, guitar, acoustic bass, and drums supported her in just the right proportion.

In addition to DVD-Audio, I listened to some tracks on SACD discs, which offer a different type of high-resolution audio. Instead of PCM (pulse code modulation) at 96kHz and 24 bits per sample, they use a scheme called DSD (Direct Stream Digital), which uses PWM (pulse-width modulation) with 1-bit resolution at much higher sampling rates, starting at 2.8MHz. Because some SACDs do not have 2-channel mixes along with 5.1 mixes, I set the Oppo player to output 2-channel in this case.

I started this round of listening with “Summer Fling” from Spyro Gyra’s The Deep End. The sound was wonderful, very rich and engaging. The electric bass was impressively deep, and the keyboards, guitar, drums, percussion, and soprano sax were all super clean and full.

Likewise, I really enjoyed listening to O Fortuna from Carl Orff’s Carmina Burana as performed by the Atlanta Symphony Orchestra and Chorus under the direction of Donald Runnicles. This is the famous part that’s used in lots of movie trailers; it’s mostly loud but with a few soft spots. Everything sounded very clean and clear; I could easily hear all the instrumental sections and choral voices, and the bass-drum hits and brass at the end were especially impressive.

The PMA-60 provides the ability to stream audio via Bluetooth, so I paired it with my iPhone XS and played a couple of tracks from my iTunes library. At first, the level was much lower than it had been from the Oppo player, but I discovered that the phone’s volume setting was quite low by default for some reason. After turning it up, the level was plenty loud enough.

“Glamour Profession” from Steely Dan’s Gaucho sounded great, though a bit brighter and more brittle than DVD-Audio and SACD. The same was true of Percy Grainger’s Irish Tune from County Derry from the album Grainger: A Lincolnshire Posy by the London Wind Ensemble under the direction of Denis Wick. This piece has a wide dynamic range, and it sounded fine at all levels, with each instrumental section clearly delineated.

The Denon AH-D9200 is the epitome of a flagship audio product. It sounds wonderful, with deep bass, open midrange, and super-clear highs. In fact, everything I heard sounded completely natural, and I could easily hear deep into the mix.

Also, it’s extremely well made. As I situated it on my head, it felt very sturdy and substantial, yet also lightweight, perhaps due in part to the earcups’ bamboo casing. And the earpads and headband were extremely comfortable, allowing me to listen for hours without pinching or undue pressure. (After a while, I started to sweat a bit under the earpads, but my skin is relatively active in that way; you might not have the same problem.) My only complaint here is that the included cardboard storage case is too flimsy to really protect the headphone.

At $1,599, the AH-D9200 isn’t for everyone. But for those who can afford it, Denon’s flagship headphone is well worth the investment, bringing musical nirvana to your ears.