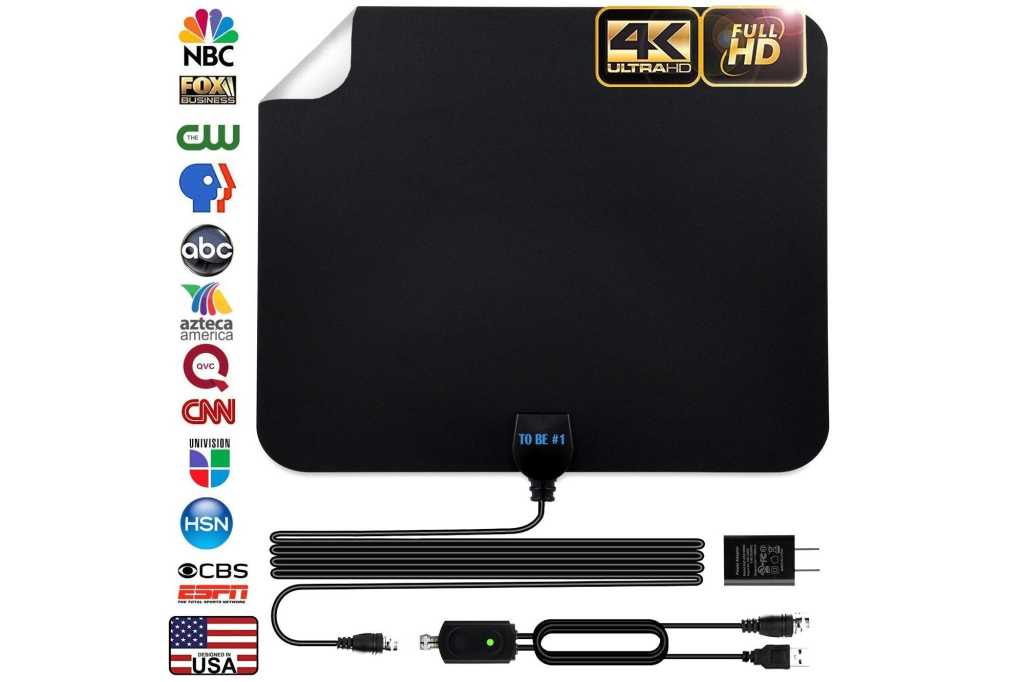 Early last week, during Amazon’s Prime Days, I decided to see if the e-tailer had any good deals on over-the-air TV antennas. I was appalled by what I found.

These misleading claims aren’t just bad for cord-cutters. They also could harm respectable antenna makers that refuse to get in the muck with less scrupulous brands. Unless Amazon—or a government watchdog—intervene, this type of advertising is unlikely to stop anytime soon.

When I reached out to Amazon for a comment on my findings, an Amazon spokesperson said “Selling partners are required to provide accurate information about their products to Amazon, and we take action against those that violate our policies and threaten our customer experience. We are investigating these listings now and will take prompt action against any that violate our policies.”

Indeed, the company quickly removed many of the offending listings cited in this story prior to publication. Still, many other offenders remain available, promising unrealistic reception or unavailable channels.

In a search for “antenna” on Amazon, the top result early last week was a sponsored listing from a vendor called “TO BE #1.” It’s an indoor flat-panel antenna that claims to “pick up TV signals up to 120 miles away.”

If that sounds like an incredible range for an indoor antenna, it’s because it defies the accepted laws of physics.

Founder and president of Antennas Direct, Richard Schneider, said he doesn’t promise coverage beyond 70 miles even for the company’s outdoor antennas, and that’s assuming “a Kansas farmer living in a two-story house on a flat prairie.” Beyond that distance, the earth’s curvature prevents antennas from consistently picking up even the strongest broadcast signals.

Getting the same reception from an indoor antenna is even harder, Schneider said, because it must contend with building materials, lower elevation, and possibly more obstructions outside the house. Indoor antennas also tend to be smaller, so they have less room for additional antenna arrays, reflectors, and other signal-improving features.

“It’s almost getting ridiculous what some of these range claims are,” Schneider said. “Even under the best circumstances, you would almost never see an 80-mile range out of an indoor antenna. It would be highly unlikely, and if you did it would be inconsistent.”

John Crabill, the chief marketing officer for Mohu, noted that the size and placement of an antenna matter more than any other factor. For indoor antennas, he said, 60 to 70 miles is the best-case scenario, but metallic interference, lower elevation, outdoor obstacles, and noise from other wireless signals can all drive reception range down.

“A claim that a small antenna can suddenly perform twice as well is simply not supported by data and testing,” Crabill said.

On Amazon, antenna makers appear undeterred. Beneath the retailer’s sponsored results, the “Best Seller” listing is an indoor antenna from 1byOne that advertises “high performance UHF and VHF reception from up to 80 miles away.” There was a time when 1byOne made more accurate claims about its antenna performance—I bought one of its indoor antennas with an advertised 35-mile range in 2016, and it’s worked well—but it seems that puffing up mile-range claims is better for business. (The company, which did not answer a request for comment, also sells an antenna that advertises 100 miles of coverage.)

Outdoor antennas aren’t exempt from this type of advertising either. One of the top search results on Amazon is an outdoor antenna from Five Star that promises “up to 200 miles long range,” and Amazon’s “Top Seller” outdoor antenna from Vansky promises a range of 150 miles. Even the RCA brand is now jumping on the 150-mile-claim bandwagon (RCA also did not respond to a request for comment).

“It has seriously gotten out of control, especially with all of the flat indoor antennas and cheaply-built outdoor antennas that have flooded the market,” said Joe Bingochea, the president of antenna maker Channel Master. “The fact of the matter is that consumers do not know any better and most times they will buy what is rated to have the best range and features regardless of what is reality.”

Is there any oversight? 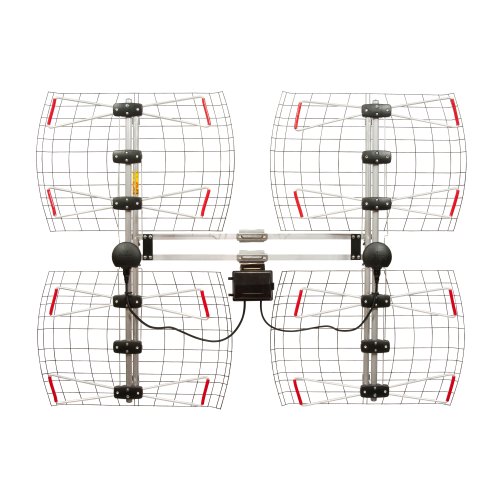 How are these mile ranges not clear-cut cases of false advertising? For one thing, determining mile range isn’t an exact science given the variables involved in picking up a signal. Even reputable brands like Channel Master and Antennas Direct are just estimating based on factors such as antenna gain and customer feedback, and Schneider acknowledges some unusual cases in which a customer has picked up stations more than 100 miles away. Other brands ,however, appear to have no qualms about advertising that kind of extreme edge case on the box.

“There are some very bad actors, mostly coming out of China, and they don’t seem constrained with the need to tell the truth,” Schneider says.

Mohu’s Crabill also suspects that some antenna makers are basing their claims on whether stations appear in a channel scan, regardless of whether they come through clearly.

“We think getting 50 channels but most are pixelated is just fluff, nothing more,” Crabill says. “It’s one of the reasons so many antennas are returned.”

Updated July 23, 2019 with a comment from RCA licensee Vox Accessories: Voxx Accessories product manager Sam Epstein contacted us to confirm that the company’s 150-mile estimate assumes the user has its RCA antenna mounted on a rotator to change the direction in which the antenna is pointed (no rotator is included in the package). Voxx also rounds up its range claim from 140 miles to compete with other companies advertising 150-mile antennas. “Unfortunately, due to all of the exaggerated claims to make our listings relevant to the Amazon shopper we have come up with this way to list the antenna,” Epstein said.

Even if you give these antenna makers the benefit of the doubt on range claims, they are arguably stretching the truth about their products in other ways.

While an over-the-air antenna can pick up broadcast channels such as ABC, CBS, NBC, and Fox for free in high definition (defined as 720p or 1080i), it will not provide basic cable channels. Even so, Vansky has an image on its product page with logos for HGTV, Showtime, and Bravo, all of which are cable channels. A company called Signum-Max has images of Nickelodeon, Discovery, ESPN, and Discovery, none of which are available over the air. TO BE #1, which has a sponsored listing on Amazon, also shows CNN, ESPN, and Fox Business in its marketing images.

Some antenna makers also advertise 4K Ultra HD picture quality, even though the current ATSC 1.0 broadcast standard maxes out at 720p or 1080i resolution. The next-gen ATSC 3.0 standard will support 4K, and a subset of these antenna makers accurately split hairs by saying their products are “4K Ready,” but consumers who aren’t following industry broadcast standards might not understand the distinction either way. 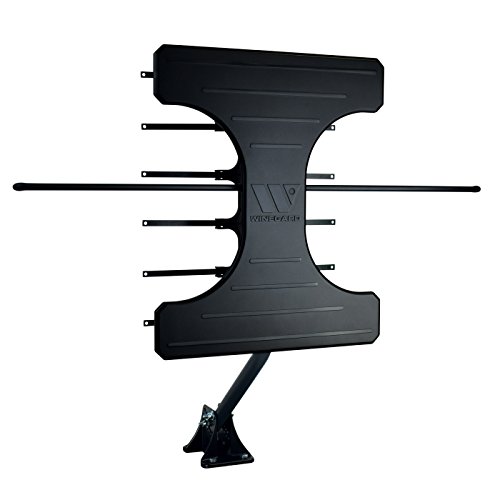 While these seemingly inaccurate antenna scams have been around for a while, retailers and regulators have shown little interest in keeping inflated marketing claims in check, even as antenna use explodes. Neither Channel Master’s Joe Bingochea nor Antennas Direct’s Richard Schneider said they were aware of any efforts by Amazon or the Federal Trade Commission to verify what antenna makers are promising. Neither Amazon nor the FTC responded to requests for comment.

In the meantime, reputable antenna makers say they’re losing business to brands that invest little in research and development, yet reap the rewards of inflated marketing. And those effects could be spreading beyond Amazon. Schneider says that one big-box retailer, which he won’t name, has pressured him to revise Antennas Direct’s packaging to better compete with products that advertise longer mile ranges.

“As a manufacturer, you have a decision to make: How badly do I want to stay on the shelf?” he says.

What you can do

In lieu of stronger protections for consumers, you can take a few steps to avoid misleading antenna marketing:

Despite what he’s experienced, Schneider hopes that given enough time, reputable brands will come out ahead. He’s already gotten word that one retailer has started asking antenna makers to explain their mile-range methodology, suggesting that retailers might be getting blowback from consumers over antennas with dubious marketing. And he doesn’t rule out complaining to the FTC himself.

“Karma’s gonna bite these guys in the ass,” he says. “They’re going to get smacked down at some point, because one of these guys is going to go too far.”