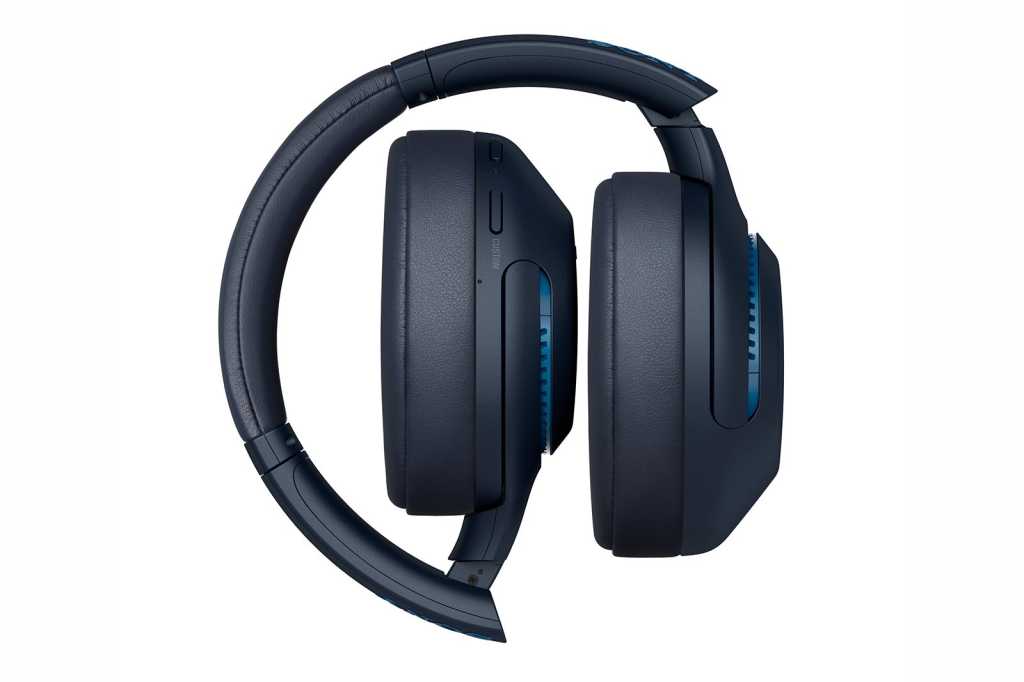 Sony’s Extra Bass WH-XB900N noise canceling Bluetooth headphones sound great, are low-latency, and do a good job at blocking out unwanted sound. At $250, these headphones are hardly cheap, but the phone app EQ allows you to dial up ridiculous amounts of bass and tailor the overall sound, and there are design flourishes galore.

The WH-XB900N’s are large, over-ear, closed-back headphones (with porting) and somewhat modest in appearance. That’s not to say they’re unattractive; they’re just not designed to call attention to themselves. In addition to the all-black model, there’s also a with subtle blue highlights (as shown below).

The headset features a pair of integrated buttons: one for power/pairing and another that you can program to either control the noise mode (ambient sound on, ambient sound off, and noise cancellation) or invoke Google Assistant or Alexa. I left it on noise control after confirming that the latter function works.

Additional functionality is available via touch gestures performed on the outside of the right cup. Swipe up to increase volume, down to decrease it, and swipe or double-tap to answer or hang up calls. Swiping and tapping the ear cup may get you some strange looks, but it’s kind of fun, not to mention clever.

The XB900N features a 3.5mm jack for the supplied male-to-male 3.5mm cable. If you want to watch movies on your plane’s entertainment system, that’s a good thing. There’s also a Type-C USB port for charging the headset. Accumulating a full charge takes a good seven hours, according to Sony. I was a bit nonplussed over that until I read that these puppies are rated to run for 30 hours between charges with noise cancellation on, and 35 hours with it off. For headphones that weigh only around 9 ounces, that’s pretty sweet.

You can connect the XB900N’s to the phone via Bluetooth or NFC, and the Sony app facilitates the Google and Alexa setups, as well as more advanced settings for the noise cancellation and ambient sound. As I mentioned, there’s also an EQ on board so you can dial up quite a bit of bass, as well as tailor the overall sound to taste.

I’m generally predisposed towards the way Sony EQ’s its headphones; I’ve used them for years with the occasional open-back Sennheiser thrown in. So it was no surprise that I liked the way the XB900N’s sounded out of the box, with one exception: a tad too much bass. That’s easily remediable with the Clear Bass control on the equalizer page. I also found myself upping the 2.5kHz band a bit, but generally leaving the 400hz, 1kHz, 6.3kHz, and 16kHz bands alone. Sony provides a number or presets, and there are two customs presets you can tweak as well as a manual setting for quick adjustments.

If there’s one thing I’m sure of, it’s that my tastes aren’t universal, or particularly in vogue. The equalizer itself is pretty musical, and doesn’t allow you to do much damage to the sound. Clear Bass will dial in more bass than most people will want, but it’s there if you want it.

Note that the bass boost comes well down the frequency range. I’d describe it as more boomy than tight, like an 18-inch down-firing subwoofer as opposed to a forward-firing 15-inch speaker.

I actually found a nice use for ambient mode, which uses the integrated mics to pipe sound in from from outside world: listening to my electric guitar while practicing without an amp. It lifts the level just enough that I don’t have to keep my head bowed to hear it.

With ambient noise off, you’re employing the headphones themselves as a barrier to outside sound. With noise cancellation, the same mics used in ambient mode capture sound while the processor profiles it and creates a reverse-phase copy to cancel it out.

I keep a fan running on low most of the time as its steady constant white noise tends to mask sudden, disturbing city sounds. The XB900N’s reduced that, but didn’t lose it completely unless there was signal coming through, at which point I would’ve been hard-pressed to tell if the fan was on.

I also found the XB900N’s fairly comfortable to wear. There’s a good amount of padding on the headband, and I barely noticed I had them on.

As to the run time, I was at about 10 hours of use when the voice feedback for the controls told me I still had a 70 percent charge, so I’m guessing Sony’s pretty accurate in its battery life claims.

I often question the value of expensive headphones, not to mention pricey audio gear in general, but the WH-XB900N’s are definitely worth the money in my book. They’re easy to set up and use, look good, effectively cancel noise, and the sound can be tailored to just about any taste. I might wish for slightly tighter “extra bass,” but that’s just me being picky. Good stuff from Sony.