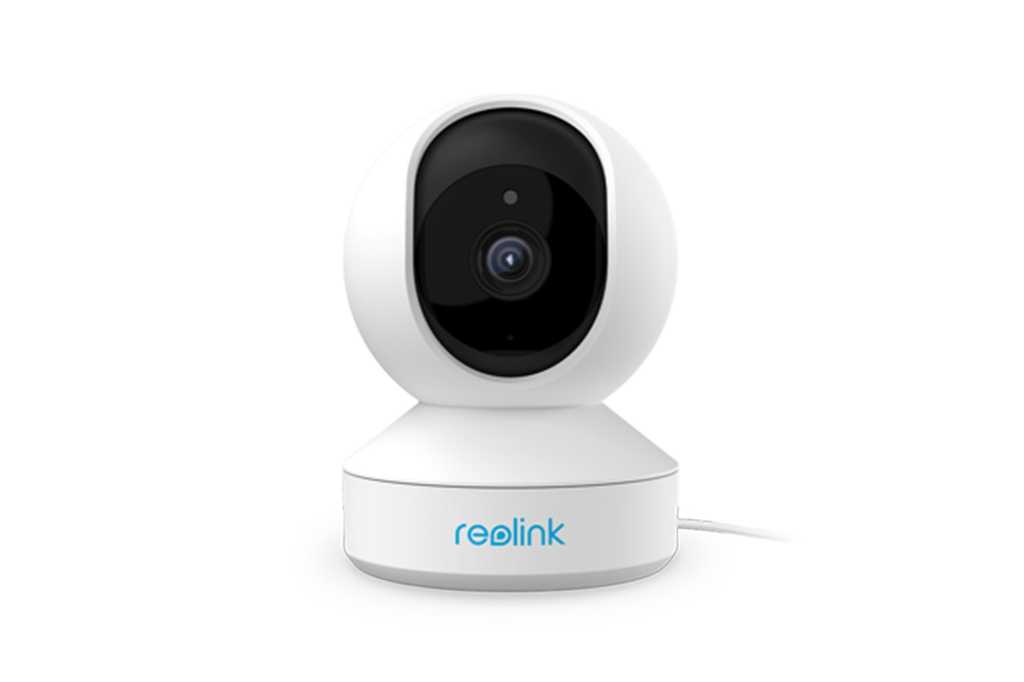 Reolink’s E1 Pro is an excellent security camera if picture quality and price are your top priorities.

Reolink adds another winner to its estimable stable of home security cameras. The E1 Pro is the latest model in the company’s line to feature crystal-clear 4MP Super HD video. It also packs in a host of premium features, but keeps the cost to a modest $55.

The E1 Pro is a tennis-ball style camera that measures about 3 inches wide by 4 inches high. Most of the camera’s hardware—including the daylight sensor, status LED, built-in mic, microSD card slot, and reset button—are located on its glossy black face. The speaker and power jack are located around the back.

The camera delivers video resolution of 2560 x 1440 pixels, versus the 1920 x 1080 pixels you get with a Full HD camera, or the 1280 x 720 pixels that an HD camera produces. If all that sounds like Greek to you, just know that the net result is a significantly more detailed image. That’s coupled with a pan-and-tilt feature—355 degrees horizontal, 50 degrees vertical—that gives you whole-room coverage.

The E1 also comes with essential security features like motion detection, two-way audio, and night vision that provides up to 40 feet of illumination in the dark.

If you want to enable 24/7 monitoring, you can connect the camera with Reolink’s 8-channel or 16-channel NVR (network video recorder). These are sold separately for $230 and $330 respectively.

Virtually every Reolink camera I’ve used has been a breeze to set up, and the E1 Pro continues that trend thanks to a voice prompt that guides you through the steps. Once you scan the device’s QR code with the Reolink app, it’s just a couple of steps to connecting it to your Wi-Fi network. Once that’s done, you can just set the camera on a table or shelf or mount it to a ceiling or wall with the supplied hardware.

The E1 Pro appears on the app’s device page along with any other Reolink cameras you have connected. A dedicated cog icon opens camera settings where you can tell the E1 Pro how to behave when it detects activity. Motion detection, recording, and notification settings are all here, as are on/off toggles for the automatic night vision and the camera’s onboard alarm .

Selecting the E1 Pro from the device list opens its home screen. The layout is nearly identical to the one used with the Reolink C2 Pro . Under the live-feed pane, there’s a toolbar with controls for the video stream, and a toggle for the camera’s resolution. Pan-and-tilt, push-to-talk, and video-clip playback controls are all on the bottom of the screen.

Not surprisingly, the 4MP Super HD video is startlingly sharp. In some instances, I could see individual hairs in my dog’s coat. If that sounds like overkill for a lot of throwaway surveillance footage, consider that it can make a world of difference when identifying the facial features or clothing of an intruder.

One of my favorite features of the Reolink C2 Pro has been ported over here. If you want to take a close look at something in the camera’s current live view, you can press a button labeled “Clip.” This opens a screen capture of the live feed at the bottom of the screen, with a small box overlaid on it. Drag the box to different parts of the image, and a zoomed-in view of that crop appears in the camera’s live view pane. It’s great for getting a closer look at anything in the scene that warrants closer inspection.

The app’s pan-and-tilt controls, which include a joystick and directional buttons you can tap, work well for the most part. The joystick allows you to make continuous sweeps of the room, while the buttons are for incremental movements. The camera would often take a couple seconds to respond to input, but once it did, its motion was always smooth and controlled. In addition to manual control, the app offers a marking feature the lets you set and name waypoints, and an “auto” button that rotates the camera back and forth horizontally a couple of times to give you a complete look at the room before returning to its starting point.

Motion detection was uniformly accurate when I used it keep tabs on my kids summertime comings and goings. The motion sensor has a sensitivity scale that’s adjustable from 1 to 50, and you can customize it to be higher or lower during certain times of day.

You can also establish motion zones to restrict the monitoring area and reduce false alerts. Usually, this is a pretty surefire solution, but I wasn’t crazy about the implementation here. Instead of using the typical grid layout, where you selecte a series of individual squares to block out an area, Reolink has opted for a pen-and-eraser input that has you color in an area to block it from motion detection.

It’s more time consuming and fussier, as it’s difficult to apply uniform pressure for any length of time, and that inevitably results in small missed areas that you’ll need to go back over until the desired area is selected. Erasing a blocked-out area posed the same issues.

The camera works with Google Assistant for hands-free control. Once you add the camera to your Google Home smart speaker, you can say “Hey Google, show me [tje room where the camera is located]” to view a live feed on your Google Nest Hub or Chromecast-enabled TV.

The Reolink E1 Pro impresses with its user friendliness and astounding video quality. It was a cinch to set up, and, a couple of nitpicks aside, a delight to use. If picture quality and price are your top considerations, the E1 Pro is a very good choice. If you’re willing to give up its high resolution, consider the Xiaomi Mi Home Security Camera, which delivers 1080p resolution but that has many of the same capabilities—plus a more straightforward motion-zone feature.

Correction: This review previously reported that the the Reolink E1 Pro was the company’s first to support 4MP Super HD Video. Reolink already has several cameras with this feature. We regret the error.