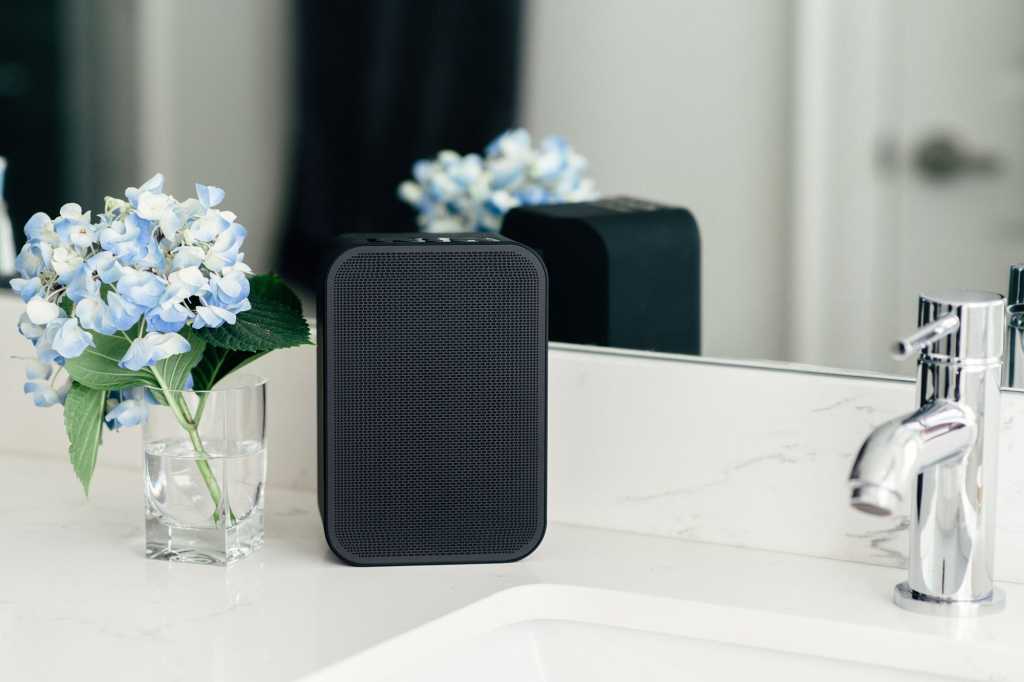 Image: Bluesound
At a Glance

This small wireless speaker has several good features, and it’s well-built, but it falls way short in sound quality, which is the real bottom line.

Bluesound is a Canadian audio company within the Lenbrook family, which also includes the upscale brands PSB and NAD. Like many such well-respected companies, Bluesound has entered the wireless speaker market with several models, including the Pulse Flex 2i. Unfortunately, this particular speaker’s performance falls far short of what I had expected.

The Pulse Flex 2i’s cabinet measures 4.9 x 7.2 x 3.9 inches (WxHxD) and weighs a hefty 2.7 pounds. Its semi-trapezoidal footprint almost invites you to place it in a corner, which will enhance the bass performance while making it less intrusive than a speaker that sits away from the wall. You can also get an optional wall-mount bracket for $60.

The custom-tuned drivers include a 4-inch woofer and 1-inch dome tweeter powered by a total of 25 watts with 0.03% THD. The cabinet is sealed, and the specified frequency response extends from 45Hz to 20kHz (no tolerance specified).

Connections abound on the Pulse Flex 2i. Wirelessly, it supports Bluetooth 4.1 and the aptX codec as well as Wi-Fi (802.11ac dual-band). This allows it to play music from Windows and Macintosh computers on the network (including AirPlay 2 from other Apple devices) in addition to streaming providers such as TuneIn, iHeartRadio, Spotify, Amazon Music, Tidal, Deezer, Qobuz, and others. Wired inputs include a 3.5mm combo Toslink/analog jack, a USB port for memory sticks, and there’s a gigabit ethernet port. There’s also a 3.5mm stereo output for headphones.

Supported audio file formats include all the usual lossy compressed formats (MP3, AAC, WMA, etc.); several lossless compressed formats (including FLAC and ALAC); uncompressed AIFF files, and MQA-encoded files. Within those formats, it can handle sampling rates up to 192kHz and bit depths up to 24 bits, making it fully compatible with virtually all forms of high-resolution audio.

Using Wi-Fi, you can place a Pulse Flex 2i in various rooms and group them—along with other compatible Bluesound speakers—to play music throughout your home in perfect sync. You can also use two Pulse Flex 2i speakers as a stereo pair or surround speakers with a Pulse Soundbar 2i and a Pulse Sub to form a complete, wireless surround-sound system.

An optional battery pack ($80) attaches to the back of the Pulse Flex 2i, allowing you to use it anywhere. If there’s no Wi-Fi network available, Bluetooth provides all the wireless connectivity you need to rock out wherever you happen to be.

The Pulse Flex 2i provides three ways to control the speaker. First, the BluOS Control app is freely available for iOS and Android devices. You need the app to connect the speaker to your Wi-Fi network, name it if you wish, and perform other set-up chores. Then, you can control the speaker entirely from the app. Available controls include bass and treble adjustments, replay gain (track gain, album gain, smart gain), output mode (stereo, left, right, mono), and volume limiter. You can even set an alarm and sleep timer.

The replay-gain setting is interesting. It attempts to normalize the playback levels of tracks that might well have different intrinsic levels. According to Bluesound, it works with “volume-adjustment metadata tags from your audio files to select the appropriate volume levels.” In other words, it depends on metadata embedded in the digital file, but there is no guarantee that such data are even included in the file. The track-gain setting normalizes single tracks, while album gain normalizes an entire album. Smart gain is said to select the best level for each file.

The app is relatively comprehensive; however, I found it somewhat non-intuitive to navigate. For example, to get to the settings from the home screen—which shows a list of the speakers connected to the app—you must first go into the audio settings for one of them, and then tap on Close, which opens the Settings screen. There should be a Settings button along with an Audio button with each speaker in the home-screen list.

Touch-sensitive, backlit buttons on the top of the speaker provide onboard control of playback and volume. Also, you can program five preset buttons to play your favorite streaming services or playlists. The play/pause button and an indicator behind the grille on the front change color and blink pattern depending on the circumstances (powering up, connected to network, muted, firmware updating, etc.). The manual includes a long list of “blink codes,” which you should keep handy to decipher what the various colors and blink patterns mean. The lights are quite bright by default, but you can set them to dim or off in the app.

Finally, the Pulse Flex 2i is compatible with Amazon Alexa voice commands. This, however, requires an Amazon Echo or other Alexa device with the appropriate skill installed. It’s also compatible with Apple’s Siri voice-controlled digital assistant.

But I then got an error message: “An unexpected error occurred. Try again.” The speaker was no longer in the Wi-Fi list, and I could see no way to try again. So I unplugged the speaker and plugged it back in, after which it appeared in the Wi-Fi list and I was able to finish the setup.

I selected the Pulse Flex 2i in iTunes, and then went back to the BluOS Controller app, which informed me that an upgrade was available and it would take up to 30 minutes to install. I initiated the upgrade, which took only a few minutes, during which time the play/pause button and front indicator flashed in a variety of patterns.

Finally, I got down to some serious listening. I started with “Hey Nineteen” from Steely Dan’s album Gaucho. The sound was quite congested, and the vocals were a bit farther back than I’ve heard on other systems. In addition, the midrange was somewhat strident and too forward. I tried turning down the bass control by 3dB and turning up the treble control by 1dB, which helped a bit, but not much.

I tried the stereo and mono settings in the app, but I heard no difference between them. There was no soundstage at all; the sound was coming entirely from a box.

Next up was the jazz classic “Since I Fell for You” from the album Rhythm Within, by trombonist Steve Turre. This cut features Steve on muted and unmuted trombone with rhythm section and sea-shell trumpets providing the background. Here, the trombone sounded rich and thick—too thick, in fact—and again, the overall sound was quite congested.

The same was true of “No End to Love” from Joanna Cazden’s album Living Through History, on which I played all the wind-instrument parts and did all the engineering. This track includes Joanna’s vocal, acoustic piano and bass, celeste, and a 9-piece synthesized-woodwind ensemble using a Yamaha VL-1 wind synthesizer. The sound was very thick and closed in with a congested vocal.

Moving on to brass band, I listened to “Helter Skelter Gallop” by the Americus Brass Band on its album The Dodge City Cow-Boy Band. Once again, the sound was very closed in, like it was being played through a megaphone.

For some classical music, I played “Calling of the Sea” by Jeff Rona from his Songs of the Sea: The Regatta Suite, which he composed for the 2008 Beijing Summer Olympics. It sounds like a full orchestral movie score, which isn’t surprising, since Jeff is primarily a movie and TV composer. As I’d come to expect by now, the sound was congested and closed in, with instrumental sections crowding each other in the non-existent soundstage.

To compare the sound of the Pulse Flex 2i with similar products I had on hand, I pulled out the JBL Xtreme 2 and the Tronsmart Element Force, both of which I reviewed for TechHive. I was able to switch between all three speakers while a track was playing, allowing me to directly compare their sound.

After matching the level of the three speakers as closely as I could by ear, it was immediately apparent that the JBL and Tronsmart both sounded much cleaner, clearer, more open, and well balanced than the Pulse Flex 2i. The JBL had somewhat deeper bass than the Tronsmart, which also sounded a bit lighter. As I had heard during my review, however, the Tronsmart produced a shockingly wide soundstage that extended well beyond its tiny enclosure. The JBL’s soundstage was more or less confined to its cabinet, but it sounded much better than the Pulse Flex 2i.

Given Bluesound’s reputation with other products, I had expected the Pulse Flex 2i to sound quite good. Alas, that expectation was completely dashed. The overall sound was congested and closed in with no clarity or soundstage at all. The JBL Xtreme 2 sounds much better, and it sells for $189 on Amazon, which is $110 less than the Pulse Flex 2i. Even better, the Tronsmart Element Force sells for a mere $59.99 on Amazon, and it smokes the Pulse Flex 2i as well.

Granted, those speakers are Bluetooth-only; they cannot join a Wi-Fi network to form a whole-home audio system. Nor can they respond to Amazon Alexa or Apple Siri voice commands. But if the sound quality isn’t good, those other features don’t mean much to me. If you’re in the market for a small wireless speaker, I’d look elsewhere.