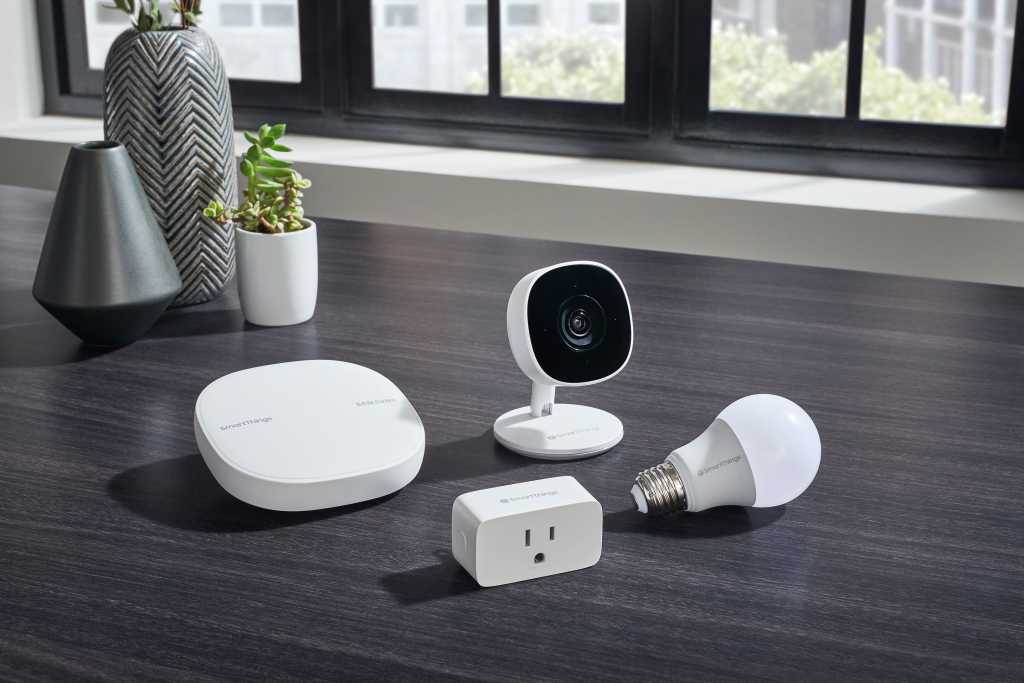 Samsung SmartThings became one of our favorite smart home platforms thanks to its ease of use and its broad support for third-party hardware. Now it’s expanding with three new SmartThings-branded devices: An indoor home security camera, a smart bulb, and a smart plug.

The SmartThings Cam ($89.99) captures video in 1080p resolution with support for high dynamic range (HDR) and night vision facilitated by infrared LEDs. The indoor camera delivers a better-than-average 145-degree field of view (as you’ll read in our security camera coverage, a 130-degree field of view is more typical).

A built-in motion detector with customizable detection zones can differentiate between people and animals or objects (such as passing cars) and will send alerts to your smartphone accordingly. Two-way audio support allows you to challenge or have a conversation with a person within the camera’s view.

The dual-band (2.4- and 5GHz) Wi-Fi camera comes with 24 hours of video storage in the cloud at no additional cost, which can be extended to up to four SmartThings Cams. An optional subscription provides up to 30 days of storage for a maximum of eight SmartThings Cams. Subscriptions cost $7.99 per month or $79.99 per year if paid annually.

In addition to the new camera, SmartThings is also launching a smart LED light bulb and an indoor smart plug. The low-priced SmartThings Smart Bulb ($9.99) is a conventional-looking A19 model with an E26 screw base that produces 806 lumens (approximately 60-watt equivalent) while consuming just 9 watts of power. It produces a warm white light of 2,700K and supports dimming. The bulb is equipped with a Zigbee 3.0 radio that supports the Zigbee Home Automation 1.2 spec.

The SmartThings Wifi Smart Plug is also affordably priced at $17.99. It supports lamps and small appliances, delivering maximum current of 15 amps and supporting electrical loads up 1,800 watts. Both the SmartThings Smart Bulb and the SmartThings WiFi Smart Plug can be controlled with voice commands (Amazon Alexa, Google Assistant, and Samsung’s own Bixby digital assistants are supported).

The camera and the smart plug can be used with or without a Samsung SmartThings Hub, since they connect directly to Wi-Fi. However, the ZigBee-based smart bulb will depend on the Hub for scheduling and other home automation routines, such as having the camera trigger a light to turn on when it detects motion at night.

All three of the new Samsung SmartThings devices are available now. We’ll have reviews soon.