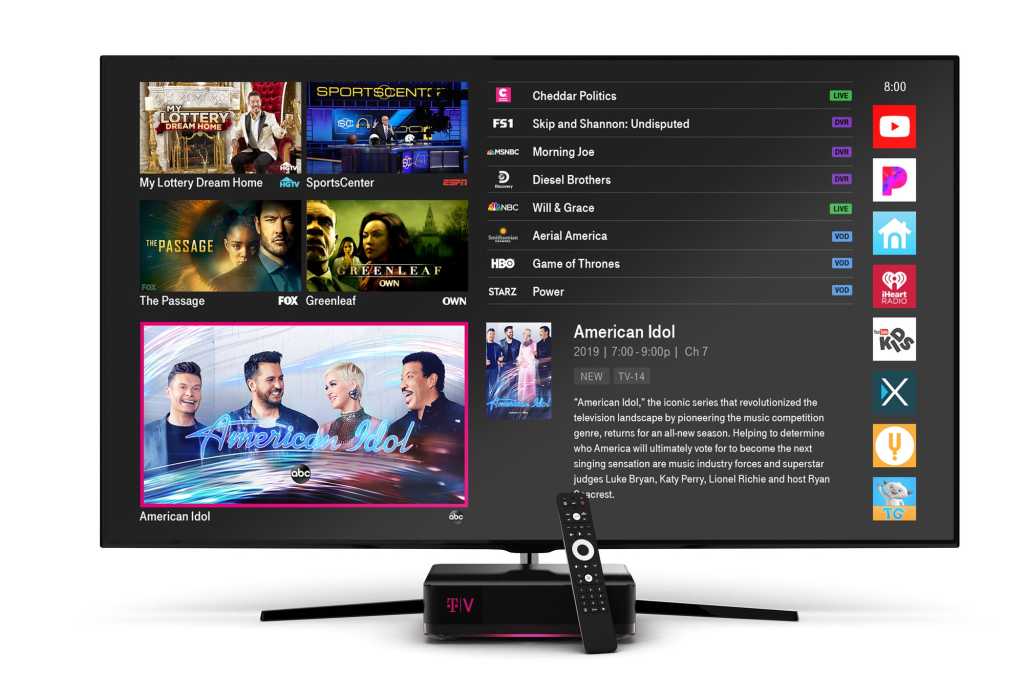 Image: T-Mobile
At a Glance

T-Vision could be a great streaming TV service one day, but it feels too much like a large-scale beta test for what the service costs today.

TVision by T-Mobile sprang from T-Mobile’s acquisition of streaming TV service provider Layer3 TV earlier this year—a move that left a lot of people scratching their heads over T-Mobile’s strategy. TVision, after all, depends not on wireless service but on wired broadband, and it’s currently available in just a few markets: Chicago, Dallas-Fort Worth, Los Angeles, New York City, Philadelphia, and Washington DC.

Being a resident of a Philadelphia suburb, TechHive asked me to give TVision a shot to see if it was a superior alternative to traditional cable and satellite TV. The short answer for cord-cutters is “nope.” TVision costs $100 per month ($90 per month if you’re already a T-Mobile customer), plus $10 per month for each additional set-top box you decide to install in your home. You’ll find plenty of less-expensive alternatives in our roundup of streaming TV services, none of which involve equipment rentals.

And despite T-Mobile CEO John Legere’s boast of “taking on Big Cable,” you’ll also need to subscribe to one of a limited number of ISPs to access TVision: Altice, Charter Spectrum, Comcast Xfinity, RCN/Wave, or Verizon Fios. To be fair, T-Mobile also says its long-term plan is for TVision customers to utilize the 5G wireless network that T-Mobile is building out—but that won’t happen before 2024. (T-Mobile says it will be able to deliver speeds higher than 100Mbps to 66 percent of U.S. residents by 2021.)

The longer answer for cord-cutters is more nuanced. Unlike any other TV provider, TVision doesn’t have service tiers, so you don’t need to decide which channels you want and which you can live without. It’s an all or nothing or proposition, but “all” includes more than 150 channels—including your local network affiliates—plus on-demand access to 18,000-plus programs. And TVision doesn’t tack on fees for high-definition or 4K resolution, DVR service, or regional sports networks. You can add premium channels such as HBO and Showtime a la carte.

TVision lacks a mobile app, and it’s entirely unavailable when you’re away from home. You can’t remotely access your DVR recordings, either. You can use each network’s app—providing they have one—to access their content, but that will require separate log-ins to each channel. T-Mobile uses artificial intelligence to surface the kinds of content you like to watch, so there’s at least one benefit to be had compared to both traditional pay TV (i.e., cable and satellite) and streaming TV services such as Hulu + Live TV, Sling TV, and PlayStation Vue. But saving money isn’t one of them.

Unlike cable or satellite TV, setting up TVision is an entirely DIY affair—you don’t need to wait for a technician to come to your home to mount anything, pull cables through your walls, or install any boxes. (T-Mobile will send an installer to your home if you feel the need.) DIYers will nonetheless need to install a box, and it must be hardwired to your router. The device you connect to each TV will connect to this box wirelessly, over a hidden network (these boxes also have wired ethernet ports if you have the infrastructure to take advantage of them). The main and satellite boxes come pre-populated with your account information, pre-paired to each other, and completely ready to go. I was watching TV within 10 minutes of plugging in the hardware.

Each member of a TVision household can create their own profile, and you will want to take advantage of this feature to get the full benefit of what the service has to offer. That’s because TVision will customize the TV-watching experience to each person’s viewing preferences, something you’ll notice after just a few uses. The home screen is divided into three sections: A box in the lower left-hand side displaying content from whichever channel you were last tuned to, a quadrant of live previews above that, and a stacked list of live and recorded shows to the right of that. Icons for various streaming apps are stacked to the right of that. These apps do not include Netflix or Amazon Prime Video, but T-Mobile says these apps and more are coming soon).

After just a few days of viewing, TVision’s AI had already developed a good idea of my favorite channels and programs and was already suggesting relevant content in this space. After the first full week, TVision even knew which channels I tend to watch at a given time of day. I was impressed with the speed at which this feature learned, and it quickly became one of my favorite aspects of TVision.

Very high-quality video—most of the time

I experienced a few instances of choppiness and degraded video quality, but the quality of TVision’s video (and audio) was better than most streaming services I’ve used—it was very close to that of cable, even with two boxes streaming at the same time. TVision is using the same HEVC codec that Layer3 TV used, which is capable of streaming 4K video using as little as 10- to 15Mbps of bandwidth. But it’s worth noting that T-Mobile recommends having broadband service of at least 50Mbps down to get the best experience (my broadband downlink speed measures about 450Mbps).

Some channels performed better than others, and the box installed in my upstairs location exhibited more dropouts than the box that was physically closer to the main box connected to my router. Changing channels was a bit slow, and changing channels too quickly exacerbated the problem—to the point where the box seemed to hang, and I had to reboot it. If you decide to try TVision and you have the flexibility to hardwire the boxes to your network, do it.

Local DVR at no additional cost

Nearly everyone time-shifts their TV viewing these days—except for live events such as sports—so a DVR is a necessity for many of us. Some streaming TV services—including Sling TV—charge extra for DVR service in the cloud. A TVision subscription includes a whole-home DVR that can record up to eight programs simultaneously—provided you have the bandwidth to handle that much data. If your ISP imposes a data cap, that could be problematic. The 1TB DVR has enough capacity to store about 400 hours of high-definition TV.

I ran into some problems programming the DVR while in front of my TV. The program guide loads slowly, and the user interface would sometimes report that the recording request had failed when it hadn’t. Programming the DVR from the TVision web portal wouldn’t show up on the DVR itself for up to an hour. The web portal isn’t useful for much else beyond maintaining your TVision account; adding, deleting, or changing your subscription lineup; and contacting tech support.

Still rough around the edges

There’s a lot to like about TVision, especially if you want to save a little money without agonizing over which non-premium channels to take and which to give up. But it feels like you’re paying $90 per month to be a beta tester (and that’s including a temporary discount for T-Mobile customers that’s available to all for a limited time). While video quality was very good most of the time, the quality on some channels was less than stellar in my experience. And the inability to access TV programming while you’re away from home is a major shortcoming compared to most cable and satellite TV offerings (not to mention many of the competing streaming services).

TVision as it exists today is far from the la carte TV programming that cord-cutters crave, but if you don’t want to make any TV-entertainment sacrifices and you live in one of the few areas where the service is available, it’s not a bad deal. Just be prepared to live with a few bugs while T-Mobile works out the kinks. We’ll keep our eye on TVision, especially as T-Mobile builds out its 5G network, and will update this review accordingly. But for now, it gets only our very highly qualified recommendation.