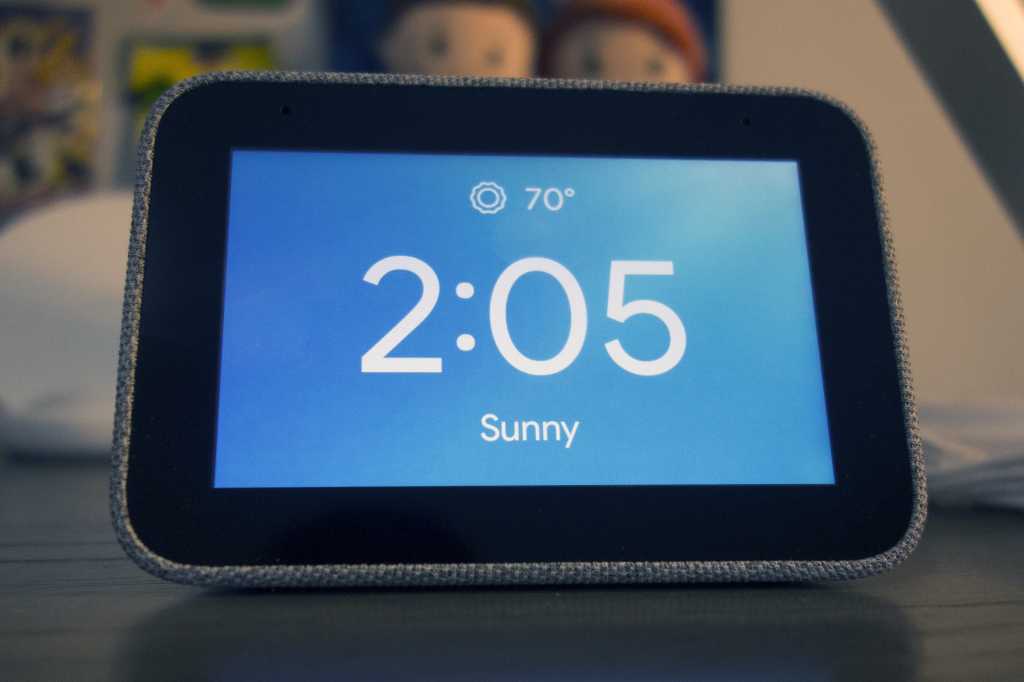 The Lenovo Smart Clock doesn’t do as much as other smart displays, but it makes the most of its limited feature set.

When it comes to screens, the general rule is the bigger the better. The Lenovo Smart Clock turns that belief on its head. With a screen that’s smaller than most smartphones, the Smart Clock is a full-featured, great-sounding Google Assistant-powered smart speaker with just enough display to comfortably view photos, videos, and, of course, the time, which should make it the perfect mix of sight and sound.

Except Lenovo hasn’t properly taught it to do the things you expect a smart speaker with a display to do. It doesn’t link with Google Photos to show pictures you’ve snapped. It can’t display videos. And it doesn’t use the new Home View for controlling lights, thermostats, and other connected devices. So basically, the $80 Lenovo Smart Clock is really just a smart clock.

But it’s a really good one. The Lenovo Smart Clock is an excellent (and cute) addition to the ever-expanding smart display lineup, one that’s smaller than the both Google Nest Hub and the new Echo Show 5 that Amazon is shipping later this month. And if you’re tired of using your phone to wake up, it’ll definitely make a great addition to your nightstand.

The Lenovo Smart Clock clearly takes its design cues from the Nest Hub. While significantly smaller than Google’s device, the Smart Clock has a gray fabric-wrapped back that covers its 1.5-inch 3W speaker and passive radiators. It’s a bit bulbous at roughly 3 inches deep and I could do with thinner bezels, but the Smart Clock is still plenty small enough to keep on a nightstand.

And that’s probably where you’ll want to keep it. The Smart Clock’s 4.48- x 2.9-inch frame is about the size of an old-fashioned alarm clock, a one-time bedside staple that was long-ago replaced by a smartphone on a charging stand. But where even the best always-on displays and wireless charging stands feature tiny numbers that aren’t so easy to see with bleary eyes.

The Smart Clock doesn’t have that problem. Like alarm clocks of yore, its display can easily be seen from across a room, and a variety of faces will keep it looking fresh each morning. There are 10 different styles to choose from, and they’re all refreshingly different. There are analog, digital, minimal, and colorful faces, as well as weather-themed faces and a funky word-based one. An option to randomly cycle through them would be nice to have, but it’s easy enough to change and customize the various faces by long-pressing on the screen.

The Smart Clock doesn’t actually do anything a Google Home Mini can’t, but it’s a much better bedside companion. It’s not just that it has a screen. Lenovo has carefully considered the ways in which you will use the Smart Clock to emphasize features that aren’t as prominent on other smart speakers. For example, if your Wi-Fi goes out, it’ll still display the clock rather than the an error screen.

For one, it doesn’t have a camera. Lenovo understands that the majority of Smart Clocks will be placed in a bedroom, so rather than implement a set of switches and toggles to turn it off, it simply eliminated the risk altogether. The lack of a camera might be a deal-breaker for some, but I’m willing to bet most people will buy it because it doesn’t have a camera rather than despite it.

But the best feature of the Smart Clock is a simple one: alarms. They’re always a tap or a swipe away, but like any other Assistant device, you’ll mostly set them by asking. Like the Sunrise feature on Pixel phones, alarms start off low and gradually increase in volume, so as to not jerk you out of a deep sleep. The speaker is surprisingly good too, so it’s a bummer that you can only set it to play one of six preset tones rather than a song or station.

It’s been so long since I used an alarm clock with actual buttons that I hadn’t quite realized how much of an annoyance snoozing has become on smartphones and smart speakers. On the Smart Clock, you can tap anywhere on the screen to snooze rather than struggle to tap a small smartphone target or hope it can understand your groggy mumbles. And there’s a setting to adjust the length of snooze time, too: a small but welcome addition. There’s even a Nap Timer, which starts a 20-minute timer for a quick stretch of shuteye.

Amazon offers the same features with the Echo Spot (and presumably the Echo Show 5 as well), but no other Google Assistant device has such a stellar alarm experience. It’s what separates the Smart Clock from other Assistant speakers, and my guess is it will be the start of a new line of diminutive smart displays. Google recently rebranded its 7-inch display as a Nest product, and I wouldn’t be surprised to see a smaller one introduced in time for the holiday shopping season.

For as good as it is at alarms, however the Smart Clock isn’t as great at being a smart display. While it dutifully does the things a smart speaker should—home control, general knowledge questions, music playback, etc.—it doesn’t take advantage of its screen beyond showing the time. So you don’t get maps, song lyrics, or the Smart Dashboard on the Google Nest Hub.

The biggest deficiency is that it can’t display photos. While its screen is a good deal smaller than the Google Nest Hub or even most smartphones, it’s still plenty large enough for photos, especially when the 2.5-inch circular Echo Spot manages to do it. Google Photos integration should be a tap and a toggle away. Alas, it remains out of reach.

You also can’t watch videos on the Smart Clock. While it connects with a Chromecast to beam things that Assistant finds, it can’t actually show them on its tiny screen. That means if you put a Smart Clock in your kitchen, you won’t be able to use it to view recipes. Instead, Assistant will read you the steps like it would on a Google Home, but all the speaker will show is the colored circles logo. It’s a bummer since the Smart Clock display is the perfect size for a countertop.

Should you buy a Lenovo Smart Clock?

The Lenovo Smart Clock is one of the most intriguing smart speakers to come along in a while, mainly because it doesn’t try to be a do-everything device. It shirks many of the features we’ve come to expect in visual smart speakers, but in the process it creates a new type of device.

As its name suggests, the Lenovo Smart Clock is truly a smarter clock. And it’s a great one. The only problem is the price. At $80, it’s only $10 less than the upcoming Echo Show 5 and about $20 less than the going rate for the Google Nest Hub. If you’re patient, you’ll probably be able to get it for closer to $50, but waiting for a sale to bring a device down to the price it should have been at in the first place is hardly a strong buy recommendation.

But even if you pay full price, you won’t be disappointed with the Smart Clock. You just might want to buy a more capable smart display to go with it.