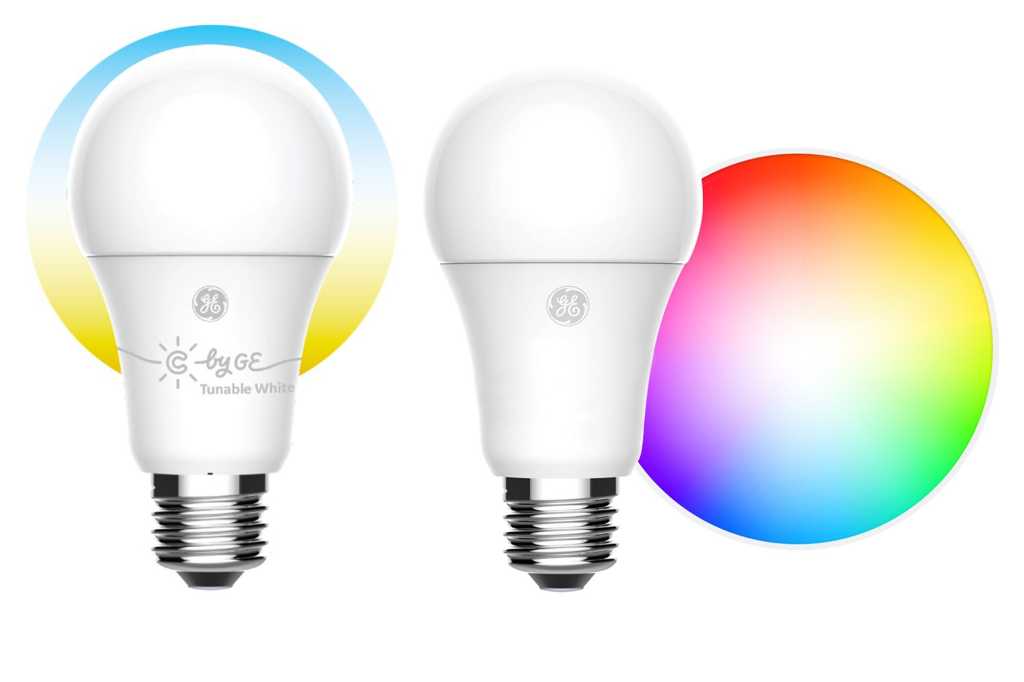 Image: C by GE
At a Glance

A solid price for this tunable white bulb doesn’t quite make up for a difficult app and problematic voice assistant connectivity.

GE’s latest C by GE smart bulbs are part of its big push toward easier-to-use smart home devices, this time with a “Made for Google” certification highlighting how easily they integrate with Google Assistant and Google Home smart speakers.

The C by GE Smart Plug I reviewed last week is also part of that plan, although GE admitted it wasn’t quite ready for “Made for Google” certification, and I had difficulty getting it to work with that platform as well as with Amazon Alexa. Will these Bluetooth smart bulbs fare any better?

I looked at two: The C by GE Tunable White Smart Bulb and the C by GE Full Color Smart Bulb. I’ll talk about each bulb in more detail below, but first let’s look at the commonalities between them. Both bulbs are identical in shape and size, with a traditional Edison globe atop a moderately large heat sink. Primary setup can be performed in the C by GE app, and as with the C by GE Smart Plug, this was seamless for both bulbs.

Using this app to make lighting changes, however, is more complex than it needs to be. On each bulb’s details page, tapping the bulb icon turns it on or off, a separate tap brings up the dimmer, and a third tap brings up a color wheel for the former and a color temperature slider for the latter. Why these couldn’t all be on the same screen is a mystery.

I had relatively similar problems here with voice-assistant setup (Google Assistant and Amazon Alexa) that I did with the C by GE Smart Plug. During setup, Amazon’s Alexa claimed to automatically discover both bulbs without any intervention; however, once I located the bulb in the Alexa app, I was invariably given a “There was a problem” error—and my Echo smart speaker would always say the bulb was not responding.

Ultimately GE blamed Alexa for this issue, and the company was still troubleshooting the issue as of this writing.

GE’s “Made for Google” certification was supposed to enable the Google Home app to automatically discover each bulb immediately after it was screwed into a socket, but this one-step connection didn’t work for me either. I was able to add each bulb to Google Home after linking it to my GE account, manually adding the bulbs, and then waiting for Google Home to (slowly) discover them. But that was only after I updated the bulbs’ firmware, a process that must be performed in the C by GE app. Later in my testing, however, this process also stopped working, and new bulbs did not appear in the Google Home app.

Now let’s dig a bit deeper into each bulb’s specifics.

This bulb might look familiar, because it’s essentially the same as the C-Sleep bulb I reviewed in September 2017. GE seems to be stepping away from that name (never mentioning it on the product page), and C-Sleep’s “Follow the Sun” auto-tuning feature is nowhere to be found in the latest version of the app. The new bulb nevertheless carries the same “Sleep” logo and shows up as such in the app.

From a features standpoint, the 800-lumen, 9.5-watt, tunable-white bulb is solid, supporting a wide range of color temperatures from 2000K to 7000K. The bulb feels plenty bright and accurate at each of these temperatures.

The best news is that at just $16 for a single bulb, the C by GE Tunable White is priced to move, coming down from a $25 street price two years ago. That’s not out of line against other Bluetooth bulbs, and if the Alexa functionality worked, it would be a great deal.

As expected, the color bulb includes all the features of the tunable white version (including the same white light temperature range options), and it adds RGB color.

The bulb is slightly dimmer—760 lumens—and it draws 10 watts of power. To the eye, the light it emits is clearly dimmer than the tunable-white bulb when in white-light mode, but the colors it puts out in full-color mode are bright and vivid. Changes were nearly instantaneous in the C by GE app, but they’re clunkier in the Google Home app.

The bulb retails for a suggested $40, which is significantly higher in price compared to generic color bulbs, but it’s on par with bulbs like Philips Hue White and Color Ambiance (which cost about $42 on Amazon). If the voice assistant features were more capable (or can be remedied through updates), it might be a contender.