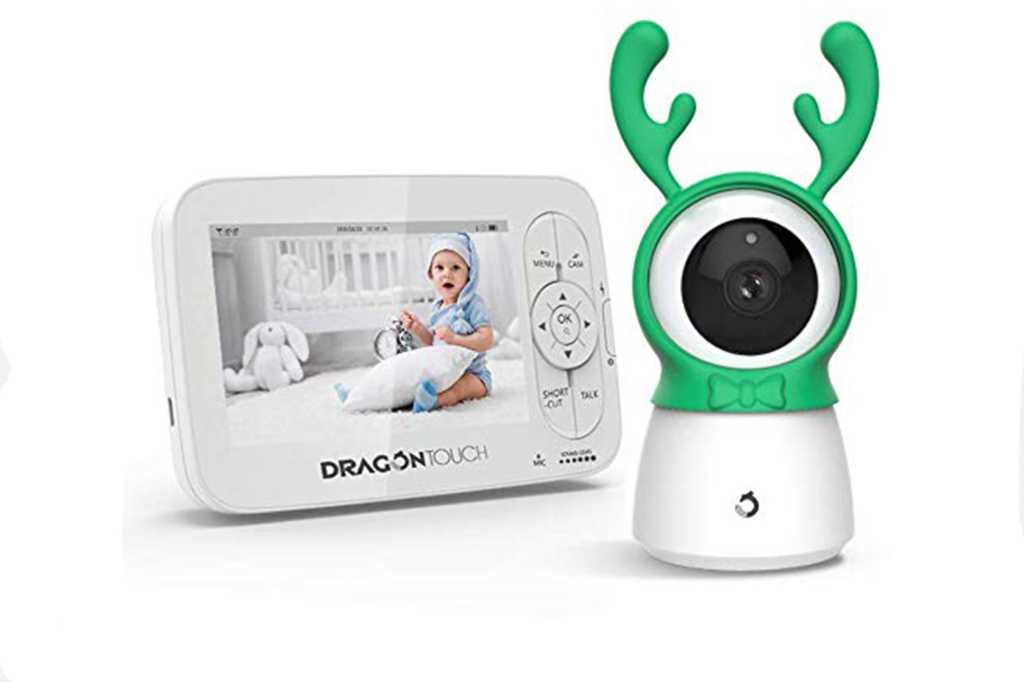 Image: Dragon Touch
At a Glance

The Dragon Touch Babycare video monitor is easy to operate and has enough safety features to allow children and their parents get a good night’s sleep.

With Wi-Fi-enabled baby monitors bringing high-definition video into the nursery, older-style radio monitors have been challenged step up their game. Dragon Touch has answered the bell with its Babycare video monitor, a pan/tilt camera with a dedicated parent unit that provides true-to-life 720p image quality.

The camera and parent unit come pre-paired, so all you need to do is plug each into an electrical outlet and switch on the handheld monitor. The parent unit can support up to four cameras, though each additional one must be manually paired. The camera can be set on a flat surface or hung on a wall using the supplied mounting hardware. In either case, it’s advised to place the camera a minimum of three feet from your child. If you want to make it look more nursery friendly, you can slip one of the two antler sheaths (pink or green) over the camera.

There’s little documentation for the monitor in the box or online, but the controls are pretty intuitive. These are adjacent to the 5-inch display and include a directional pad and buttons for accessing the menu, activating the mic, and toggling between cameras, plus a “short cut” button for adjusting volume and screen brightness. There are also LED indicators for battery-charging status and the audio level in the nursery.

The image quality is razor sharp with rich, accurate colors—a far cry from the noisy, washed out images you get on many parent units. A transparent strip across the top of the image displays the signal strength from the camera, the date and time, the nursery’s room temperature, and the camera’s battery level.

The camera’s 70-degree viewing angle is wide enough to eyeball a sleeping baby, but if you want to keep track of a mobile child and their environment, the pan/tilt function will give you wider coverage. Using the directional pad on the parent unit, you can rotate the camera up to 340 degrees horizontally and 90 degrees vertically. The movements are smooth and produce little noise, so you don’t need to worry about waking your child.

Night vision activates automatically in low light. The infrared LEDs provide plenty of illumination without being so bright as to disturb your baby. The black-and-white image quality is just as clear as it is in daytime mode.

Most of the monitor’s other features are controlled from the menu.

Sound detection sensitivity can be set to low, medium, high, or turned off altogether. Medium is the default, but I found it too hair-trigger, so I set it to low. When your child’s stirrings are loud enough to set sound detection off, the monitor beeps an alert until you press the OK button to acknowledge it.

You can also turn on temperature alerts, though exactly what triggers one is left unexplained. There is no option to set upper and lower temperature limits, and if there’s a preset threshold, I couldn’t find any documentation of it.

The lullaby choices are also curious. Each of the five tunes is identified only by a number, so you’ll need to toggle through them the first few times until you’re familiarized with them, and the selections might surprise you. The nursery rhyme “London Bridge Is Falling Down” is the closest a traditional lullaby. I can even understand reinterpreting the Beatles’ “Hey Jude” as a lullaby, given the popularity of the Rockaby Baby! album series. But the inclusion of “Jingle Bells” and “Auld Lang Syne” seem downright peculiar. And using the option to play them all one after the other makes for a pretty strange playlist.

Those peccadilloes aside, the Babycare video monitor is solidly built and easy to use. And the features parents are most likely to prize—sound detection, night vision, and pan/tilt—work beautifully. The price is a little higher than we usually see for a radio monitor—in fact you can get one of our top two picks, both Wi-Fi enabled camera’s that allow remote viewing via your smartphone—for roughly the same spend. But the Babycare video monitor is a worthwhile choice if either of those options are more tech than you want to take on.