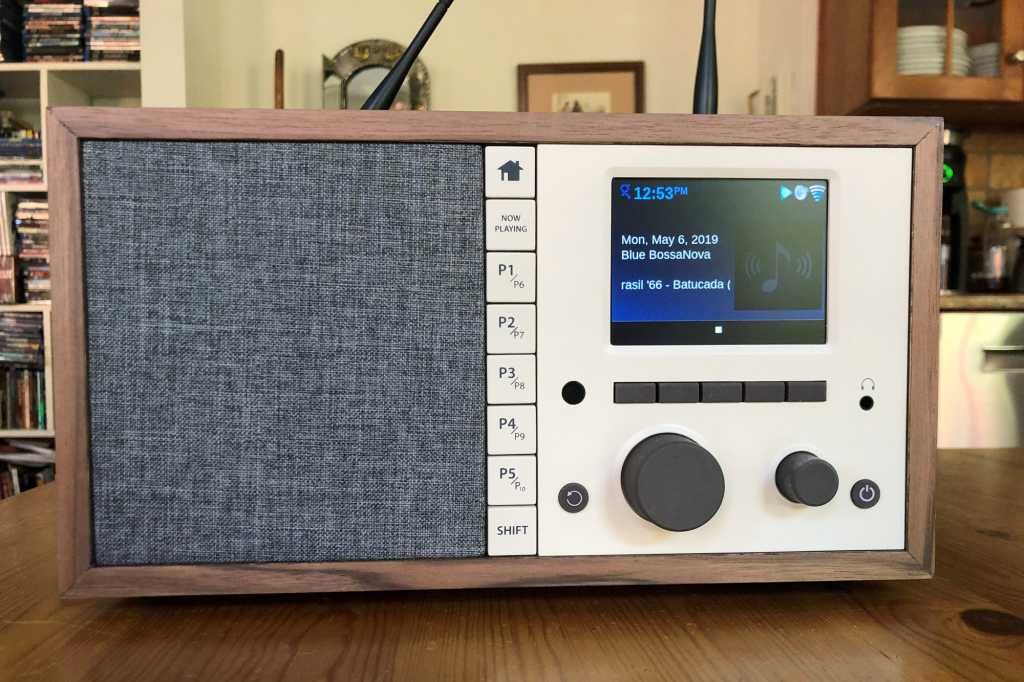 Smooth sounding, sharply priced, and loaded with features, Grace Digital’s Mondo+ Classic internet radio delivers on enough of its promises that you won’t notice its glitchy delivery on other less-essential ones.

With its buffed warm sound and soft good looks, this glorified $250 (MSRP) table radio evokes vintage 1950s and 60s products from such makers as Zenith, KLH, Grundig, and RCA; radios that stood guard on nightstands and calmed visitors in doctors’ waiting rooms. This one comes dressed in a wood (walnut) cabinet, beige metal face plate, and tweedy grill cloth. (Or you can choose a boring all-black look.)

Take a gander at all the old-school radio push buttons: 10 source presets offering a happy throwback for listeners with an eclectic nature—or a short attention span. But this entertainer is young at heart. Instead of tuning in local FM and AM stations, the Mondo+ Classic’s twin whip antennas access your Wi-Fi network to connect to the wide world of internet radio—including your local broadcast stations’ simulcast streams.

In addition to the excellent onboard and IR remote controls, the newer of two Grace Digital apps (“GD+”) nicely works basic radio operations and services on your Android or iOS smartphone and tablet.

It’s not entirely a glitch-free ride into the future, though. For some odd reason, the radio listened more attentively to Chromecast and Bluetooth-fed content triggered by an IPad Pro than it heeded signals coming from an iPhone X. And I never got the touted voice control going with Google Assistant devices. A fast Qi wireless induction charger pad built into the top of the radio proved a better match to recent Samsung phones than to the current Apple of my eye. 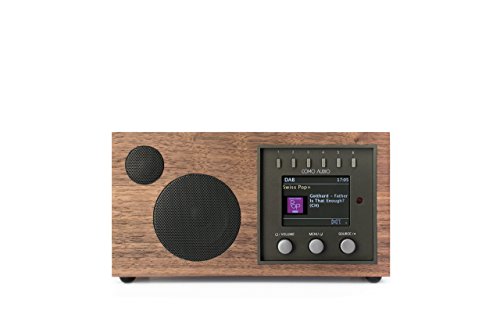 Still, with a price tag that’s $100 less than rivals such as the Como Audio Solo and the Tivoli Audio Model 1 Digital (the model in walnut, that is), you just might find the Mondo+ Classic to be the bedmate of your dreams.

All this and more

Grace Digital has been serving up streaming music radios longer than practically anyone else in the game. When the maker jumped into the fray 12 years ago, its major competitors were Roku (which would later shift focus to video streamers) and Slim Devices (later acquired by Logitech). Slim introduced such innovations as touch-screen tuners, but Logitech gave up on streaming hardware in the wake of its $100 million bad bet on Google TV (the Logitech Revue).

In fact, Grace Digital was into internet radio so early it had to cultivate its own database of 40,000 web radio stations and streams from around the world. These days, channel aggregators V-Tuner and TuneIn do the heavy lifting for most internet radio makers. Grace’s ever-in-flux list now includes an additional 60,000 channels from Europe’s Receiva. “We’re adding, adjusting about 200 listings every day,” said Grace Digital co-founder and CEO Greg Fadul.

Still, I was able to stump the system, searching in vain for favorite Brazilian music stations BlueBossaNova, Paul in Rio, and Radio Rio Verde FM, which come up readily on rival internet radios. At least Grace will work with you to fix these snubs. On their website, I was able to enter the URL of a wanted stream, and then watch it migrate to the favorites lists on the radio’s screen and the companion GD Control app (for Android and iOS) I’d added to my smartphone and tablet. This same custom-added station could then be readily saved to one of the 10 radio presets—recalled either on the face plate with its five hard buttons plus a “shift” key, or with the 10 dedicated, nicely sized preset buttons on the infrared remote.

And what a pleasure it is to go exploring for content on the radio itself, using its selector knob to plow through a polished menu on its uncommonly large (3.5-inch) color LCD display. You can also work a distinctly smaller volume knob, plus five small chicklet buttons just below the screen that switch function as required.  Other buttons take you “back”, “home” and show what’s “now playing.” Fadul said that’s plenty of engagement for the vast majority of the Mondo+ Classic’s “mostly 50-plus” users. “Only a small percentage even sign up for the free app,“ he said.

Baked-in, fast-loading audio services also include iHeartRadio (850-plus channels), CBS/Entercom/Radio.com (230-plus channels) and SHOUTcast (75,000 stations). Plus, a big batch of BBC offerings, stuff from NPR, Calm Radio, and Live 365.

Channel nabbing would be easier still if the Grace OS could cross-search and collate these content silos. Such an upgrade is on their to-do list. A web-delivered update will soon add Amazon Music and perhaps Pandora to the menu as well.

Millions of subscribers to SiriusXM radio’s satellite-plus-streaming service (or streaming-only pay option) will be cheered by how easy it is to land and listen to their favorite channels and on-demand content on the Mondo+ Classic radio. Confusing matters some, Grace Digital also makes the similar looking SiriusXM Sound Station, which sells for $129.99. The hitch? The Sound Station delivers only SiriusXM’s 200-plus channels and on-demand shows, and totally snubs the rest of the streaming entertainment world.

For podcast fans, any and all offerings in Apple’s podcast database can be readily nabbed here, from YOGAmazing, to All Songs Considered, to Marc Maron‘s WTF chats with celebs in his garage studio.

Looking for a white-noise machine? The Mondo+ Classic packs in several dozen snooze-inducing sleep sounds, from babbling brook to chirping birds to humming hair dryer (for real). Your choice can be set to fade away in as little as 10 minutes or last as long as you like. 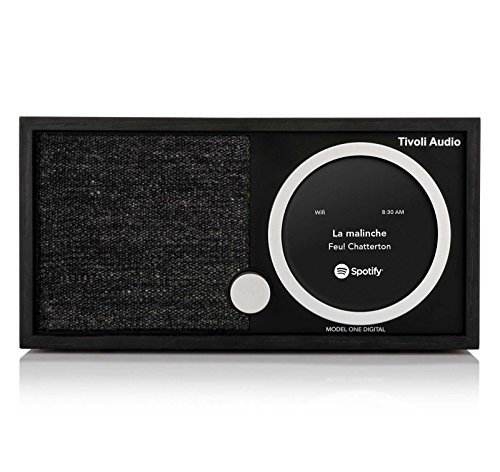 Pretty much any content that’s accessed on the Mondo+ Classic (even the sleep sounds) can be stored and recalled as a favorite with one of the radio’s 10 presets—four more than you’ll find on Como Audio and Bose SoundTouch products. And these button commanders never fail you, unlike the misunderstood voice requests to sleepy Alexa, which often directed my Sonos One smart speaker down the wrong rabbit hole.

I was also impressed with this radio’s refined, multi-user five-event alarm clock, which can wake you to, say, a rousing local morning show (or SiriusXM’s Howard Stern) on weekdays, to mellow jazz from Paris on Saturday morning, and tropical rain forest sounds on Sunday. Single-day alarms are also available, as are 10 alarm-only noise makers that can likewise be set to ramp up slowly or blast fast. These also automatically function as backups should you lose your broadband connection.

I have mixed feelings about the oval Qi wireless smartphone pad on top for magnetic induction charging of compatible smart phones. Grace Digital rates the charger at 10 watts—a good match for high-end Samsung Galaxy phones adept at fast charging. But with my iPhone X optimized for a 7.5-watt max Qi charger, the extra intensity made the phone heat up more than I like, even when removed from its case. Grace’s Fadul says this warming is nothing to stress about, that it won’t shorten the phone’s battery life. Personally, I’m reserving judgement.

Chromecast and Bluetooth connectivity have also proven to be an iffy, teeth-grinding proposition. And system freeze ups are more common when your smartphone and the Grace Digital radio are far from—or on a different floor than—the Wi-Fi router they’re both connected to.

Guts… and some glory

Audio sources and connections include a front-mounted (where it belongs!) headphone jack, stereo analog Aux In and Line Out jacks, and a multipurpose USB connector that can charge a phone, host a USB storage device, or—with an optional $15 adapter—connect the radio to your network via an ethernet cable. There’s a UPnP media player onboard, for streaming music from media servers on your network, and—coming soon—two-way Bluetooth that will enable you to beam music not only from your smartphone to the radio, but also from the speaker to  headphones (but not to Bluetooth speakers).

The voice setting offered the most detectable improvement—clearer diction on talk shows—while others hardly moved the needle. I suspect the physical driver doesn’t have the dynamic range to take full advantage of either the DSP or the amp.

Listening to a variety of styles—from the earthy riches of the New Orleans Jazz and Heritage Fest on WWOZ, to the mondo-modern “New Sounds” on WQXR-Q2—I thought the speaker sounded best when the preset and tone controls were flat or just a single notch up or below “0” on the bass and treble settings.

When tone controls were pushed harder, the clarinets and trumpets in Evan Christopher’s Afro/Cuban-flavored jazz band got raspy. Bass only came on stronger on LCD Soundsystem’s “Pulse (v1)”—heard on QXR-Q2—when the volume was cranked, and then with an unwelcome increase in sonic bloat. It’s telling that Grace rates the speaker with a frequency response range of 50 to 20kHz without specifying tolerance or total harmonic distortion values.

Don’t get me wrong. At “flat” settings and moderate volume levels, the Mondo+ Classic is a perfectly pleasant performer, well suited for casual listening. Still, I can’t help but wonder how much better this box might present with a more refined driver. That would of course push the cost of the package above the magical $199 street price, but it might also lead me to consider placing more than one Mondo+ Classic in a multi-room set-up. As it sits, I can’t imagine making this box my prime listening source outside the bedroom or small home office.