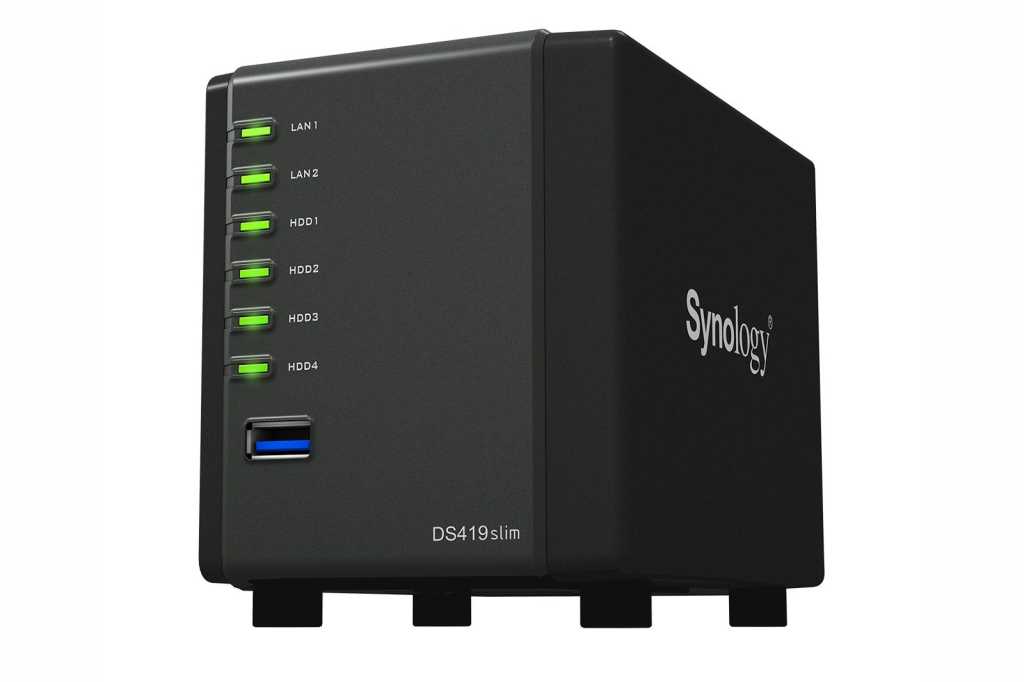 Image: Synology
At a Glance

This diminutive NAS box is designed for 2.5-inch media, including SATA SSDs. It’s packed with media-streaming and other features, and it runs very cool and quiet when populated with SSDs.

Small is good when it comes to NAS boxes designed to serve up audio and video over a home network. Synology’s 4-bay DS419slim, being built for 2.5-inch drives, is significantly less bulky than the average NAS box designed to accommodate 3.5-inch drives. The DS419slim is perfect for SATA SSDs (solid-state drives), which are nearly noiseless and generate less heat than mechanical hard drives.

The DS419slim  measures approximately 5.5 inches deep, 4 inches wide, and 4.6 inches high, including its feet. There are four non-locking 2.5-inch trays (friction holds them in place) that slide out the back, as well as a pair of gigabit Ethernet ports and a USB 3.0 port alongside them. There’s another USB 3.0 port on the front for quick copying, as well as status lights for the Ethernet ports and drives. The power button and status light are found on the side of the front faceplate.

The DS419slim is rendered in black plastic, and it has enough heft with drives installed (my test unit arrived with two 512GB Seagate IronWolf NAS SSDs installed) to stay where you put it. Without drives, it might blow away in the wind. Hopefully, you’re not intending to use it outside.

The CPU that performs the magic is a low-power, 5TDP, 1.33GHz Marvell Armada 385 88F6820 dual-core, supported by 512MB of DDR3 memory. Low power means less heat, and again, a lower system fan speed. Said fan is located on the bottom of the unit and draws in fresh air to circulate out through vents on the top of the unit, as well as the gaps between the drive trays, which are not covered by a door or the like.

You can adjust the speed of the fan, but you can’t turn it off entirely, and it’s not one of the quieter fans I’ve experienced. I live in a city and am used to white noise. If you’re not, the small amount the DS419slim emits should remain below background levels if you place it out of the way. Just know that it’s not dead quiet.

If you haven’t experienced a modern NAS box, configuring and using one is just like using a computer, except that the box’s desktop appears in a browser window. If your router assigns your DS419slim an IP address of 192.168.1.150, for example, you’ll simply type that address into your web browser’s address bar and log on. You’ll be presented with a screen much like what you see below. If you can’t find the box’s IP address, Synology provides a utility that can.

You can try DSM—Synology’s NAS box operating system—online at this link. The desktop in a browser was once a rarity, but many NAS boxes offer this type of interface these days, although not all are as elegant or as feature-filled as Synology’s.

The DS419slim (and other Synology NAS boxes) have media features up the wazoo, including DLNA and iTunes servers and proprietary video, photo, and music server apps. You can also run Plex Media Server on this box. This NAS box can fill any number of other roles, too, ranging from email and web server (you can host your own site using something like WordPress), to IP security camera surveillance (Synology includes two free camera licenses to use with its Surveillance Station software).

Props to Synology for the easy WordPress setup. It’s one routine where QNAP sends you all over the place to get an installation to work.

The DS419slim is also a nearly perfect backup destination for your other computing devices, supporting a number of remote access protocols, including Rsync and FTP, and even offering to backup your mobile devices via Synology apps. Synology also provides a web portal for easy access to your device when you’re away from home.

One thing that I do find a bit perturbing, however, is Synology charging extra to support exFAT, the file system that almost every new portable drive comes formatted in. Nearly every other computing device in existence can read exFAT, but you’ll need to cough up $4 to have a Synology NAS box support it. I know it’s a cutthroat market, and that’s only the price of a hipster cup of coffee, but seriously?

DiskStation Manager will read drives formatted HFS+, and it can read and write NTFS-formatted drives. There’s no support for APFS, but not even Macs use APFS for external storage.

The limiting factor for sustained throughput these days is generally gigabit Ethernet. The most you’re going to see is roughly 120MBps, though as you can see below, small file performance can vary quite a bit. The DS419slim is a pretty fast box, though the QNAP TS-253B I compared it to is much faster with small files, even though it’s using two 12TB Seagate hard drives rather than SSDs.

The QNAP TS-253B uses a faster Intel Celeron J3455 CPU, and it has eight times the RAM (4GB). More RAM means a larger cache and much better performance with small files, but it also draws a lot more power and its sustained throughput is little better than the DS419slim’s.

The DS419slim streams media extremely well, and it even smoothly delivered a 4K Ultra HD Blu-ray rip that my older QNAP HS-251A choked on. Late-model CPUs definitely have their advantages.

As for the noise I talked about earlier: There is a low-power mode for the fan, but it only keeps the DS419slim quiet when workloads are light. You can’t define the temperature range for the fan, as you can with QNAP’s boxes, so you’re stuck with Synology’s choices. The workload is not light when it’s streaming, so the fan never turns off. But fan speed never increased beyond nominal, either.

I’ve heard both louder and quieter fans, including the much quieter one inside the power-hungry QNAP TS-253B. I keep my network equipment in a different room, so it doesn’t affect me; and to be honest, it wouldn’t bother me anyway. If you’re sensitive to such things, you’ve been warned.

A great box for SSDs

The DS419slim, configured with SSDs—or even with 2.5-inch mechanical hard drives—is a great box for a smart home—as long as you don’t mind a little fan noise. It’s small, it’s more than fast enough, it’s an ace with 4K UHD video, and there’s a host of apps you can leverage for other tasks (client backups, security cameras, and more). Recommended.