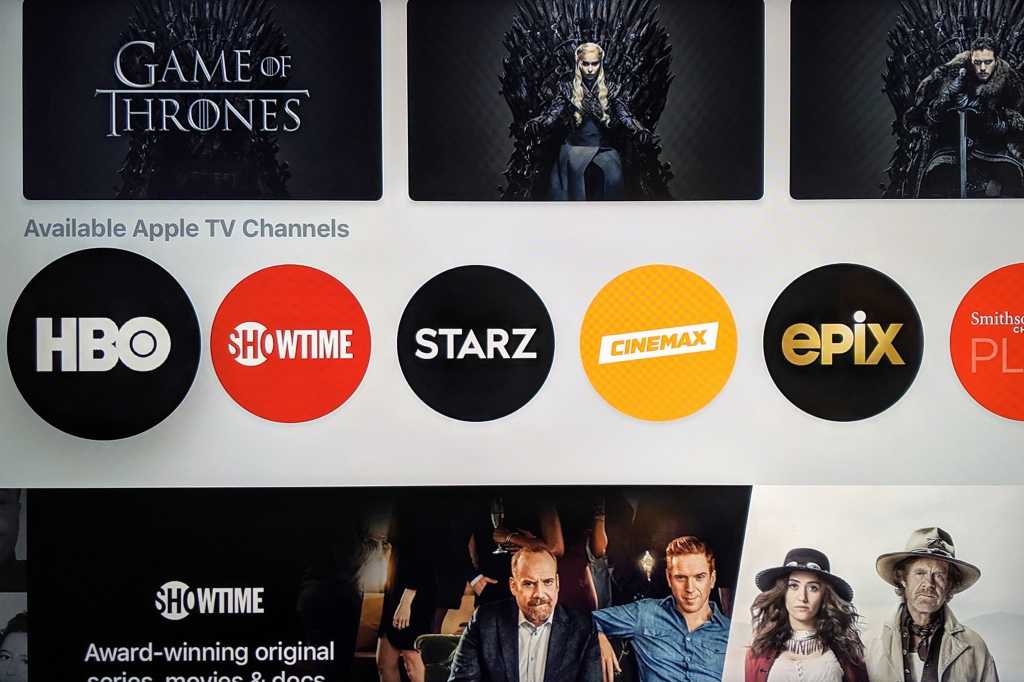 This week, Apple became the third streaming platform to launch its own marketplace for video subscriptions.

With Apple TV Channels, you can sign up for services like HBO and Showtime directly through the TV app on iPhones, iPads, and Apple TVs. You don’t have to download separate apps to start using those services, and you can manage all their subscriptions through iTunes billing. Apple TV Channels also supports offline viewing on iOS, so you can download Game of Thrones episodes before your next flight.

Apple isn’t the first to provide a single access point for streaming video subscriptions. Amazon Channels has offered a similar service to Prime subscribers since late 2015, and Roku entered the fray with Premium Subscriptions in The Roku Channel earlier this year.

But in trying to simplify streaming video sign-ups, these “Channels” services have created new complications. Each service has a different set of features, along with different restrictions on which devices you can use. They can also be more expensive than individual apps that offer annual subscriptions. And because the biggest streaming services don’t support these Channels marketplaces at all, you still have to deal with multiple apps and billing systems in the end.

The main selling point of these “Channels” services is simplicity. If you’re on an Amazon Fire TV Stick, for instance, you can search for a show like Game of Thrones and sign up for HBO with just a few clicks. Everything goes through your Amazon account, so you don’t need to create a new password or enter any new billing information. You can then access HBO shows through the Fire TV or any other device that has Amazon’s Prime Video app. When you want to unsubscribe, Amazon’s Manage Your Prime Video Channels page lets you cancel multiple subscriptions from one place.

Roku’s Premium Subscriptions service is similar. Just open the free Roku Channel app on any Roku player, and then scroll down to the “Browse Premium Subscriptions” section, where you can subscribe to services like Starz, Epix, and HBO with whatever credit card Roku has on file. You can then watch those channels on any device with the Roku Channel app, which for now includes Roku players and smart TVs, Samsung TVs, iOS, Android, and the web. Roku’s account page provides a central location for cancelling subscriptions.

As for Apple, you can subscribe to services like HBO, Showtime, and Starz through the TV app on iOS, Apple TV, and Samsung smart TVs. Just scroll down to “Available Apple TV Channels,” and you can sign up with just your Apple ID. Cancelling subscriptions through iTunes is a bit tricky, but you can use this iOS shortcut to jump straight to the subscription management page on an iOS device.

The problem with “Channels”

While this is all great in theory, “Channels” marketplaces create a new layer of confusion when you’re trying to sign up for video services. To watch HBO on Apple TV, for instance, you can now subscribe through Apple TV Channels, Amazon Channels (via the Prime Video app), the standalone HBO Now app, or various live TV channel bundles that sell HBO on their own. The same is true on Roku, except with The Roku Channel instead of Apple TV Channels as an option.

With rare exceptions, none of these services talk to each other, either. An Amazon Channels subscription does not transfer over to Apple TV Channels or Roku Premium Subscriptions, which means you need to keep track of how you signed up for what, especially if you own different kinds of streaming devices. And while Amazon Channels subscribers can log into the HBO Now, Showtime Anytime, and CBS All Access apps, those are exceptions to the rule. None of Amazon’s other Channels let you log into individual apps, and neither Roku Premium Subscriptions nor Apple TV Channels allow for individual app logins at all.

I suspect a lot of folks will get tripped up by all this and wind up with duplicate subscriptions as a result. This even appeared to happen with a user on Reddit over the weekend after signing up for CBS All Access on a Fire TV, and then trying to log in on a Roku. The distinction between different versions of the same subscription will not be obvious to everyone.

Even if you’re good at keeping track of where your subscriptions reside, choosing one “Channels” service over another has consequences. If you subscribe to CBS All Access through Apple TV Channels, you won’t be able to watch on Roku, Amazon Fire TV, Chromecast, or Android TV, because Apple’s TV app isn’t on those platforms. (Apple says it’s releasing a TV app for Roku and Fire TV, but hasn’t said when.) And if you subscribe to Showtime through Roku Premium Subscriptions, you won’t be able to watch on Fire TV, Apple TV, Chromecast, or Android TV.

Your choice of “Channels” service also affects which device features you can enjoy. With Amazon Channels on Fire TV, for instance, shows like Star Trek: Discovery will appear in the “Recents” row on the home screen, so you can quickly pick up where you left off, and you can launch episodes directly with Alexa voice commands. On Apple TV, however, you can’t use Siri voice commands to launch Amazon Channels shows, and on Roku, Amazon Channels shows don’t appear in search results at all. Signing up for All Access directly through CBS would allow you to use voice across all three platforms, but then you’d lose the “Recents” row integration on Fire TV.

The whole concept just makes a big mess out of what is already a potentially confusing situation, and it doesn’t help much in the end because most streaming services don’t support Channels anyway. Netflix still has its own app and billing system, as does Hulu, Amazon Prime, and every live TV streaming service.

Besides, most of the offerings in these Channels services aren’t that desirable. Outside of premium cable channels like HBO, Showtime, Starz, Epix, and CBS All Access, the vast majority of these “channels” are digital-only streaming services you’ve probably never heard of (who’s ready to pay for Echo Boom Sports?) or scraps from TV networks’ back catalog (NickHits, History Vault).

There is, however, a silver lining: With all these new subscription marketplaces comes the ability to burn up more free trials. Just sign up for a trial to HBO via Amazon Channels, cancel immediately, and enjoy your free week of binge-watching Barry. Rinse and repeat with Apple TV Channels and Roku Premium Subscriptions, and then move on down the line to other services like Showtime and Starz.

Don’t feel guilty about this, either; if TV networks and tech companies are going to introduce all this extra confusion into cord-cutters’ lives, they might as well pay for it.

This story has been updated to note that Amazon Channels allows logins to the CBS All Access app.