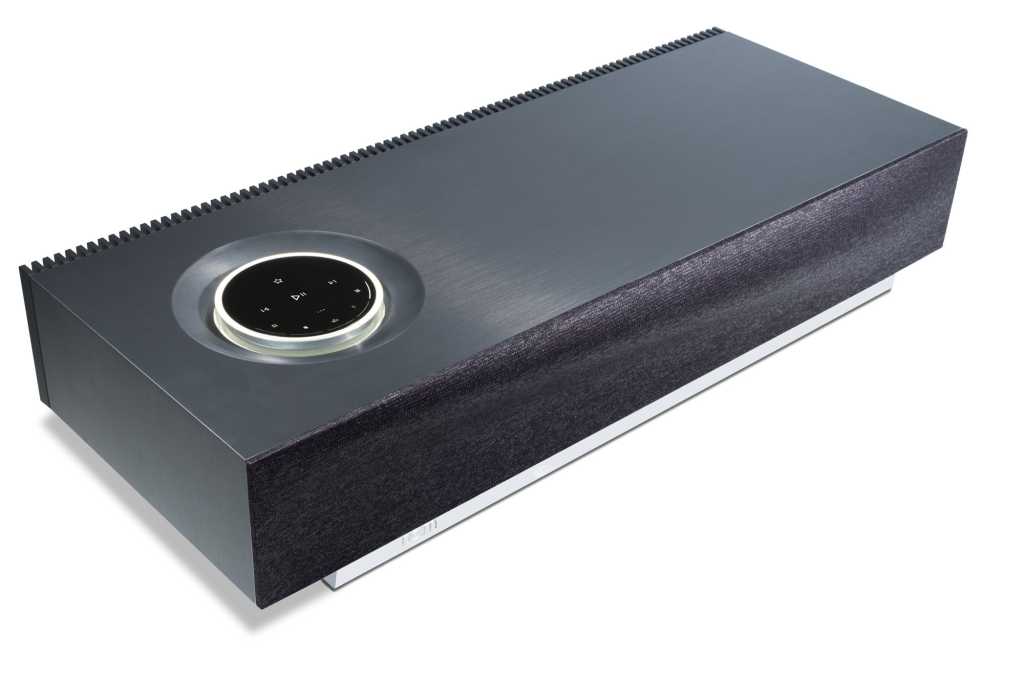 It’s the end of the road for our favorite high-end Bluetooth speaker, the exquisite Mu-so, from British audio manufacturer Naim. But you needn’t worry, the close-out is to make way for the Mu-so 2nd Generation, now on display at the High End audio show in Munich, Germany. I had an opportunity to hear the new component at a pre-show demo in New York City.

Update: September 3, 2019: You can now read our in-depth review of the Naim Mu-so 2nd Generation.

The Mu-so is much more than a Bluetooth speaker, of course, and its replacement looks to be even more comprehensive. The new model is “intentionally similar in looks, but 95 percent changed on the inside” according to Naim Audio Group Director of Design Simon Matthews. Matthews says the second-gen all-in-one music maker has been in development for two years, in an effort to make the speaker sound even better and be easier to use than the original. Despite the long gestation period, the new unit will cost just $105 more than the original: $1,600.

“We reworked the power supply, all the digital architecture, the signal processing, the streaming platform and the drive units,” Matthews said. The speaker’s internal bracing uses “the same polymers deployed in riot shields, and [there’s] a larger down-firing port system that now runs through the entire cabinet for better bass.” On the outside, the 28-pound metal and acrylic-wrapped cabinet bears a striking resemblance to its predecessor, but is slightly deeper, measuring 24 inches wide, 5 inches high, and 11.5 inches deep, including its signature massive heat sink.

The distinctively oversized and backlit volume control wheel embedded in the top of the unit has been improved with a slick proximity sensor that wakes the unit when your hand hovers close, with a multi-function LCD display and operations screen located inside its ring.

Naim placed aggressive bets on high-resolution audio, presuming that increasingly fast broadband access would spawn elite streaming services to meet the demand for instant gratification. And those bets have paid off. Asked to comment on Sonos’ success selling relatively high-end audio components to the mass market, Matthews complimented Sonos on the success of its business model, but was more critical of Sonos’ reluctance to embrace high-res audio: “You can’t compare a Play 5 to a Mu-so. We’re operating on a much different performance level.”

The first-gen Mu-so supported audio files with up to 24-bit resolution and sampling rates as high as 192kHz (48kHz max over a wireless network). The Mu-so 2nd Generation will be able to play 32-bit/192kHz music from a portable hard drive; 32-bit/384kHz DSD, FLAC, and WAV audio files streamed from a wired UPnP media server; and 24-bit/192kHz lossless audio from streaming services including Tidal, Deezer, and Qobuz. The new speaker also supports Spotify Connect and is Chromecast compatible.

For demo and instant gratification purposes, a Mu-so 2nd Generation comes out of the box with five high-resolution tracks already loaded into memory, featuring artists such as Band of Horses and Christine & the Queens. “But we’re not just serving the high-res market with this product,” Matthews said. “A lot of care has been taken so even low bit-rate signals and MP3 files sound sweeter on the new Mu-so.”

Improved performance starts with a far more robust, 16-core digital signal processor that can handle 2,000 million instructions per second (MIPS). That compares to the original Mu-so’s single-core, 150 MIPS DSP. The new DSP empowers more sophisticated bass compression management and refined loudness contouring that distinctly alters the way the drivers work for optimal linearity, efficiency, and freedom from distortion “shifting the settings with every step on the volume control,” according to Matthews.

Following the precepts of the company’s 1973 founder Julian Vereker (taken by cancer in 2000  at age 54), Naim doesn’t offer users any tone controls to mess with on the Mu-so  2nd Generation, believing the proper adjustments were made in the studio and consumers are more likely to just mess things up. But the product does ask for a smidgen of user input at initial set-up: You inform the system if the Mu-so is sitting out in the open, close to a wall, or plopped in a corner. The speaker will then compensate with appropriate EQ tweaks.

The Mu-so 2nd Generation also boasts a more refined streaming platform, developed at a cost of $4 million and previously restricted to Naim’s pricier Uniti series products (like the $7,500 Uniti Nova amp/streamer) and dedicated network players, including the flagship $26,000 ND5 555. “The same engineers who work on those products—and even our $250,000 amplifiers—also worked on the new Mu-so,“ said Matthews.

Naim also collaborated with its French sister company Focal on a new set of drivers that take full advantage of the new DSP and refinements made to its six 75-watt Class D amplifiers. (Naim and Focal are both now owned by the Vervent Audio group.) Unlike many all-in-one audio components, the Mu-so 2nd Generation aims to deliver true stereo, with left/right pairs of 1.0-inch silk dome tweeters, 2.0-inch midrange, and 5.0-inch racetrack (oval) woofers. “We went through six versions of the mid-range and seven iterations of the long-excursion bass driver until we got to the place where we wanted to be,” Matthews said.

Matthews explained how one Naim engineer, a 30-year veteran, spent “hundreds and hundreds of hours fine tuning the digital signal processing, the crossover point…. This engineer listens to a really eclectic range—jazz, classical, rock, pop, even EDM—and wants to understand how they all will play here. This is not a product tailored to do just one thing well. It tries to be as capable in every genre as possible.”

Naim and Focal collaborators also had to consider the new model’s enhanced functionality as a TV soundbar. First-gen Mu-so customers took it upon themselves to push TV soundtracks to the system via an optical cable. The new model makes that connection much easier via HDMI with ARC (audio return channel) and volume control via the TV’s remote.

I barely skimmed the Mu-so 2nd Generation’s stylistic surface in my relatively short listening time, but I came away impressed by its discrete air of sonic luxury, its uncommon ease, openness, and fine detail with audio salon standbys such as Nils Lofgren’s live recording of “Keith Don’t Go” and Steely Dan’s breezy “Hey Nineteen.”

Sultry soul singer Janelle Monae steamed the room with “Make Me Feel,” likewise heated with a house-thumping bass, Prince-ly plucked guitar, and polyphonic synthesizer surging with such vibrancy I could almost chew on the notes.

My only quibble came when another reviewer dialed up the film score to How to Train Your Dragon on the Naim’s nicely wrought tablet app. He claimed the orchestral score featured “real” string players, but to my ears the violins sounded too buffed, lacking rosin-on-the-bow grit. And OK, serious stereo channel separation was barely in evidence on the Mu-so 2nd Generation, though that shortfall might have been a factor of the unit’s placement in the hotel demo room.