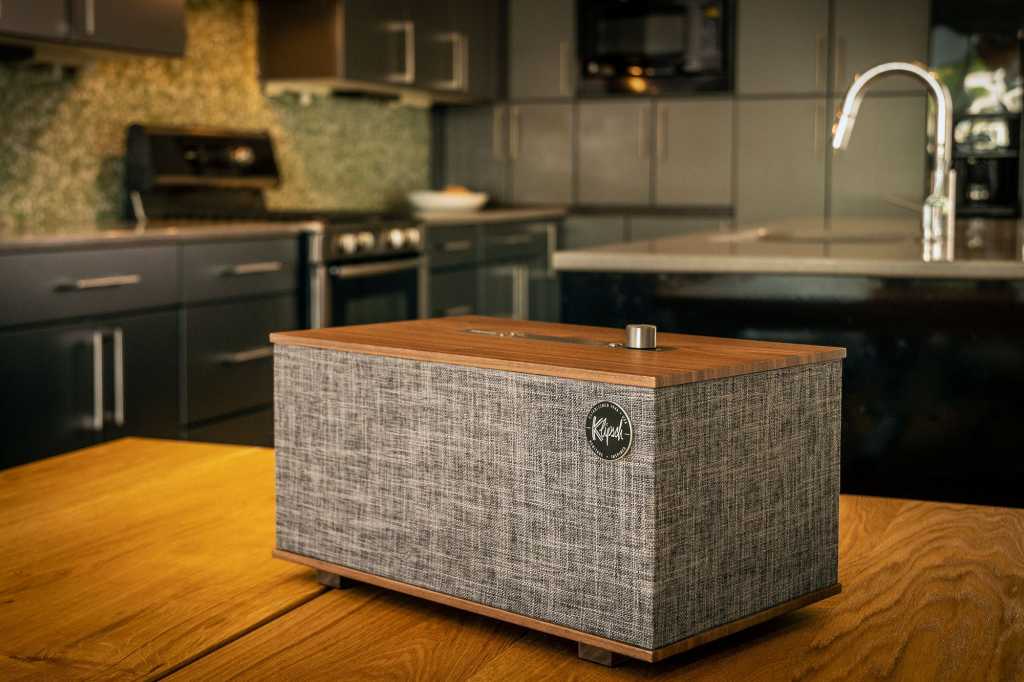 This is a beautifully designed smart speaker, if you like mid-century modern design. Its looks and audio performance justify its $500 price tag, but it’s not an exceptional value in what is a very crowded field.

Since 1946, Klipsch has made highly regarded speakers in the USA. Of course, all companies must keep up with the times, so Klipsch has expanded its product offerings to include tabletop lifestyle speakers offer Bluetooth connectivity and stream audio from online sources.

Among those products is The Three, which was introduced in 2017 as part of the company’s Heritage Wireless line. Late last year, The Three was updated to include Google Assistant voice control. The build quality is top notch, and the sound is quite good overall, except that it’s a bit boxy.

The Three with Google Assistant is a handsome unit, evoking a mid-century modern aesthetic with genuine wood (walnut, in this case) panels on the top and bottom and a rough-woven linen grille cloth. It’s also quite hefty, measuring 13.7 x 7.0 x 8.0 inches (WxDxH) and weighing 10.32 pounds.

A single 5.25-inch “subwoofer” handles the low frequencies, while two 2.25-inch drivers take care of the mids and highs; all three are mounted on the front of the sealed enclosure. Two 5.25-inch passive radiators on the sides enhance the bass, leading to a specified frequency response from 45Hz to 20kHz (-3dB). The total power available for the active drivers is 60 watts continuous (

Perhaps the most important new feature is Google Assistant voice control. Two microphones on the top of the unit listen for commands. You can use Google Assistant to access streaming music from Google Play Music, YouTube Music, Spotify, Pandora, and Deezer, with other providers coming on board all the time.

It also lets you assemble a multi-room system with other Google Assistant-enabled speakers and control compatible smart-home devices, such as thermostats and lights. You can even ask Google Assistant about things like sports, the weather, and much more.

Joining Google Assistant is Google Chromecast built in, which lets you stream audio from a Chromecast-compatible smartphone, tablet, or computer. This opens up the potential for high-resolution audio from providers such as Tidal, which is no problem for The Three—it can decode high-res audio up to 192kHz/24 bits. Google Assistant-based whole-home networks are currently limited to conveying 96kHz/24-bit audio, though that is a software limitation, not hardware, so the maximum audio resolution can be increased in the future.

All but one of The Three’s onboard controls and indicators are located on the top of the unit. They include a microphone-mute button, Bluetooth-pairing button, four LEDs that indicate the status of Bluetooth/volume/Google Assistant, Google Assistant button (in case you don’t want to say the wake-up phrase “Hey Google”), and a volume dial that also acts as a play/pause button when you push it straight down. A reset button on the back performs—what else?—a factory reset. The controls all have the feel of high-quality components.

Setting up The Three with the Google Home app on my iPhone 6 went without a hitch. After setup, I asked Google Assistant to play some jazz, and it started playing a jazz station from Google Play Music. When I asked it to play Joni Mitchell, it informed me that her music was available only to Google Play Music subscribers, but then it suggested a Joni Mitchell station, which it started with no further ado.

Also, I ran into no problems pairing The Three to my iPad via Bluetooth. Once that was done, I started listening to various tracks to see how this speaker sounds. For comparison, I switched between The Three and the JBL Xtreme 2 portable Bluetooth speaker I reviewed on TechHive earlier. I realize they aren’t in exactly the same product category, but the Xtreme 2 is the closest thing I had on hand.

Starting with world music, the instruments on “El Helwa Di” from Yuval Ron’s album Under the Olive Tree include oud, zither, Middle Eastern percussion, ney flute, synthesizer, and a female vocal solo. All were rendered faithfully with good, deep bass in the synth pads. The sound, however, had a distinct character of coming from a box, and the soundfield did not extend beyond the boundaries of the cabinet. The Xtreme 2 sounded remarkably close in sound quality with a bit more bass and a slightly veiled sound.

Next, I played “Iberian Sunrise” from Travels by the Rhythm Future Quartet, which includes two acoustic guitars, violin, and acoustic bass. This tune evokes the hot-jazz era in 1920s Paris. On The Three, the sound was detailed and full, with accurate renditions of each instrument, though again, it was a bit closed in. The JBL sounded just a bit congested, though it was more open with bigger bass.

Moving on to more mainstream popular music, I listened to “Dark Horses” from the Yellowjackets’ album The Spin. The Three had a nice, full sound with good reproduction of the instruments and rich bass that wasn’t overpowering. Again, the Xtreme 2 sounded remarkably similar, though a bit thinner with more energized bass, and its sound was more open than The Three’s.

Van Morrison’s “Crazy Love” as performed by Michael Bublé on his album of the same name is a great showcase for Bublé’s voice, which was rendered beautifully on The Three. The overall sound was full, rich, and powerful with excellent bass, though it still sounded like it was coming from a box. The Xtreme 2 sounded lighter and more open.

Turning to classical music, I listened to “Three Ballads from the Catskills: I. The Lass of Glenshee” by Norman Cazden as performed by the Oslo Philharmonic Orchestra under the direction of Ivan Buketoff. The orchestra was well balanced across the frequency range with good renditions of solo instruments and instrumental sections, and the dynamic range was excellent. The Xtreme 2 was a bit thinner and more open, but otherwise surprisingly similar.

Next up was Act I: Plauso! Voci Di Gioia; Sin La Tomba é a Me Negata! from Donizetti’s opera Belisario performed by the London Symphony Orchestra under Carlo Felice Cillario with soprano Monserrat Caballé on the album Presenting Monserrat Caballé. As before, the dynamic range was excellent, and the rendition of the solo voice and orchestra were both very good. The Three plays classical music with authority, more so than the Xtreme 2, which sounded a bit thinner—but again, more open.

Overall, I am quite impressed with the sound quality of The Three. It has a clean, rich, well-balanced sound, though the soundfield does not extend beyond the cabinet. In addition, the sound seems to be coming from a box, giving it a slightly closed-in quality. The sound is, in fact, coming from a box, but this is not as obvious with some other speakers I’ve heard.

The build quality is top notch, with a solid-feeling cabinet and controls. And Google Assistant works like a charm, responding to my voice even with music playing fairly loud. Finally, it can join a wireless whole-home audio network with other Google Assistant-enabled speakers and other devices.

Is it worth $500? Yes, but not exceptionally so. I’d be more enthusiastic if it didn’t exhibit that slightly boxy sound quality. Still, it’s a handsome piece of mid-century modern design, and its sound is quite good otherwise. If you like to use Google Assistant and it fits into your décor, The Three will make a good addition to your musical lifestyle.