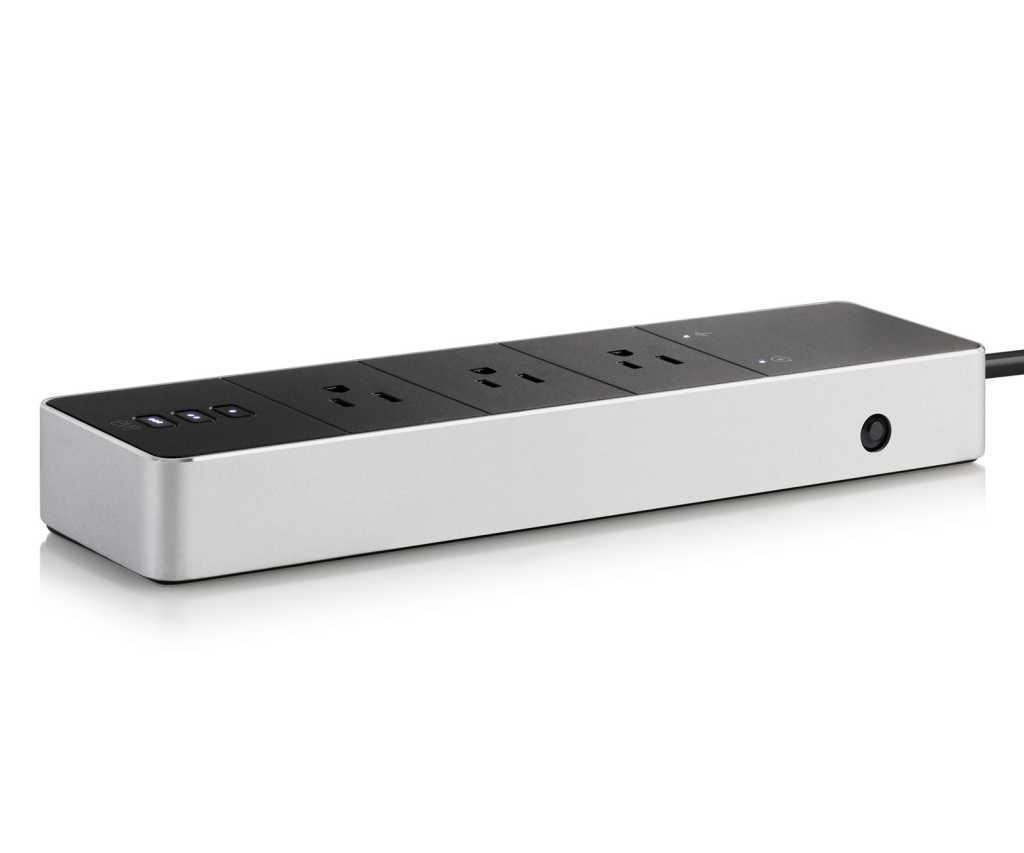 Image: Eve Systems
At a Glance

This very expensive three-outlet surge protector works fine, but it never comes close to justifying its price tag—unless HomeKit support is an absolute must-have feature for you.

Not every power outlet is a great fit for an in-wall or add-on smart outlet. If you have a bevy of equipment—such as that in an entertainment center—a multi-outlet surge protector is almost invariably in order. The good news for smart home fans is that the old-fashioned power strip has finally started smartening up as well, offering the same features you’ll find in the more common single- and dual-plug smart outlets.

The latest of these to arrive is the Eve Energy Strip, which immediately makes a statement through its industrial design. A stark rejection of today’s antiseptic, plastic alabaster smart home products, the Eve Energy Strip is a veritable Death Star, with an aluminum frame decked out in black and chrome.

The first bit of bad news: Like the Koogeek O1US, the Eve strip offers only three outlets, which barely qualifies as a power strip in my book. The Koogeek offers three additional (non-smart) USB outlets, but the Eve doesn’t even give you that. (USB ports are admittedly not all that useful in an entertainment center, but they’re certainly useful in a desktop scenario.)

If you’re looking to power a half-dozen components in your TV cabinet, Eve isn’t a good fit. I’d suggest you could use two Eve strips to get the job done, but that’s actually not an option: The Eve’s own three-prong connector is set at a 90-degree angle vs. its 6-foot-long cable; this means you can’t use it in the upper outlet on a two-socket power receptacle without blocking the lower one—although it does make the connection more secure. The Eve also includes three physical power buttons, each lighted and marked with dots to indicate their respective socket, giving you easy manual control over each outlet.

The Eve Energy Strip connects to your home network via Wi-Fi and is HomeKit-enabled. There is no Android support at all, so if you’re not already using Apple products, another product will be a better fit. A HomeKit sticker is easily accessible on the backside of the unit for use with installation, and I was able to install the Eve app and set up the power strip within a couple of minutes.

As with most HomeKit apps, you can control any other HomeKit device through the Eve app, and I found it quickly populated with all my smart devices on first launch.

The app is generally appealing, and it offers tons of depth, letting you name and assign a unique icon to each plug. Once you do, you can immediately tell Siri to “Turn on the fan,” for example, without any additional configuration. Amazon Alexa and Google Assistant aficionados, on the other hand, are out of luck. Extra features include an intuitive scheduling system and integrated energy monitoring—but that benefit is undermined by the fact that both are for the entire strip, not its individual outlets.

The app needs minor debugging. It has trouble recognizing if an outlet is on or off if you change the schedule, for example. As well, after initial installation, an alert in the app bade me to visit the Settings menu, but when I did I could find no additional information about what the problem was. After some digging around in submenus I finally stumbled upon the cause for the alert: A needed firmware upgrade.

Now for the really bad news: The Eve Energy Strip costs a whopping $100. That’s a huge number, one that’s three or four times the price of a generic Wi-Fi enabled power strip (which typically offer four ports plus USB connectors), and its $30 higher than our top pick in this category—TP-Link’s Kasa Smart Wi-Fi Power Strip—which offers six smart outlets that can be independently scheduled (but it does not support HomeKit).

I can’t find another smart surge protector on the market that’s anywhere close to the price of the Eve. While the Eve strip generally works fine, it doesn’t raise the bar in any way. To justify this kind of cost, some serious upgrades are in order.