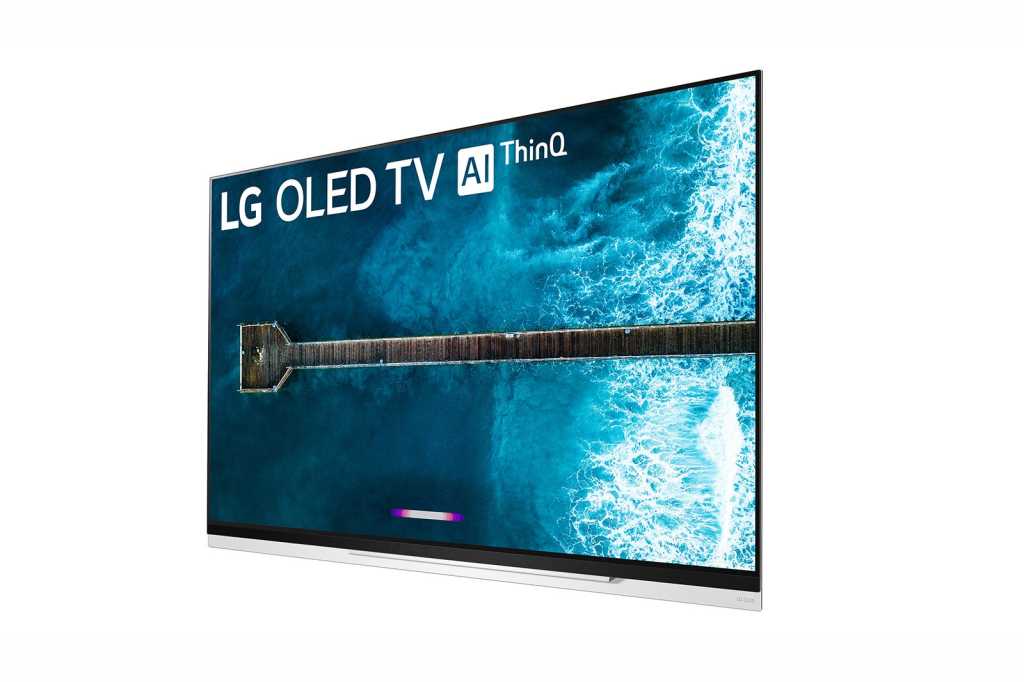 The E8 was the best 4K TV we saw last year, and the E9 is likely to be the best 4K TV we’ll see this year, with a small increase in brightness and minor enhancements in image processing and its user interface compared to last year’s model.

The E9 uses the same basic design as last year’s model, featuring a glass front bezel that extends beyond the screen to rest on whatever surface you set the TV on. Assuming you don’t wall mount it using the 300mm x 200mm VESA mount point, that is. A large counterweight attaches the bottom of the TV and holds it upright with a slight backwards rake.

I/O ports includes four HDMI, three of which are side-facing (with ARC and eARC supported on HDMI 2); three USB 2.0 ports (one side facing); a coax connector; composite AV; ethernet; a 3.5mm jack for RS-232C control; and an optical S/PDIF output.

Wireless communications are via 802.11ac Wi-Fi and Bluetooth 5.0. The E9 has Google Assistant onboard, and Alexa is coming via a firmware upgrade. Dolby Vision, HDR10, and HLG high dynamic range are supported, but HDR10+ is not. Most material is broadcast in multiple formats, so the lack of the latter is not an impediment.

There’s support for Dolby Atmos and DTS-HD, plus WiSA (Wireless Stereo Audio) streaming, although the latter requires an optional dongle. That will set you back around $80.

While LG’s E8 series generated approximately 700 nits of peak brightness, I measured 790 nits from the E9. That means it can do a bit better in terms of overall detail as well as making HDR pop a bit more. To the eye, the difference is hardly drastic.

LG has added HDR and SDR Technicolor Expert Modes for calibration junkies and professionals, and the company is now doubling down with two passes by the de-banding algorithm. An improved automatic tone-mapping algorithm has also been added, and the lag in gaming mode has been reduced.

It’s not high fashion, but LG’s universal Magic Remote is one of my two favorites; the other being Samsung’s One Remote. I find the Magic Remote’s ability to move a cursor about the screen freely—as you would with a mouse—to be a time saver. A very good analogy for it is using a PC or Mac with a mouse and keyboard, versus just a keyboard.

The quick settings menu that pops up when you press the settings button has been moved to the left-hand side of the screen, where the deep settings menu already resided. That might sound like a trivial change, but it means your eye is already focused where it needs to be when you go to tweak the settings.

The E9 is a glass bezel OLED, which means it has the best blacks and screen conformity in the business. Put alongside, last year’s E8, you’d be hard-pressed to tell the difference in performance with the naked eye. I certainly was.

The color is rich, saturated, and largely accurate. The use of a white sub-pixel will skew the color a bit in very bright areas, but it’s not something you’ll notice without instrumentation. OLEDs, being self-emitters that can be turned off individually, suffer no LCD backlight leakage. That means excellent contrast and blacks—the keys to OLED’s appeal.

Motion can be as smooth as you wish, depending on which TruMotion setting you select. There is a slight lag before it kicks in on fast pans, but that’s something shared by all TVs. Sadly. It’s rarely an issue and only really noticeable with video designed to reveal the phenomenon.

The only real annoyances with the E9 were a bit of moiré in some complex details in motion (flying dirt), and that only occasionally. Very large dark areas will flatten out into what appears to be all black, losing subtle variations. The latter defect is ever so slightly less noticeable than with the E8 due to the greater peak brightness.

The sound emanating from the E9 is far above average. So far above, you’re unlikely to feel the need for a soundbar. The emanations aren’t quite as good as what you’ll hear from a Sony OLED, but they’re darn close. It’s a different story if you’re a surround-o-phile. While you can apply Dolby Atmos to normal material using the E9’s internal 4.2 system to generate a pleasant quasi-surround effect, it’s not like having separate speakers in separate locations.

Streaming to the E9 from my QNAP TS-253B NAS box was also quite facile. The E9’s internal engine handles 4K UHD files just fine, though I had to play those from a local USB drive for an interruption-free experience.

Quite likely the TV you want

The E9 is a great TV, and truth be known, just about everyone who viewed it here at IDG singled it out as the pick of the litter. Let’s just say, that if you’re looking to buy the best OLED on the market, the E9 is it.

That said, if you find a great deal on LG’s E8 series, and they were still available at the time of this writing, you’re  not giving up a whole lot. Additionally, you get largely the same experience, sans glass, with the significantly cheaper C9 series.