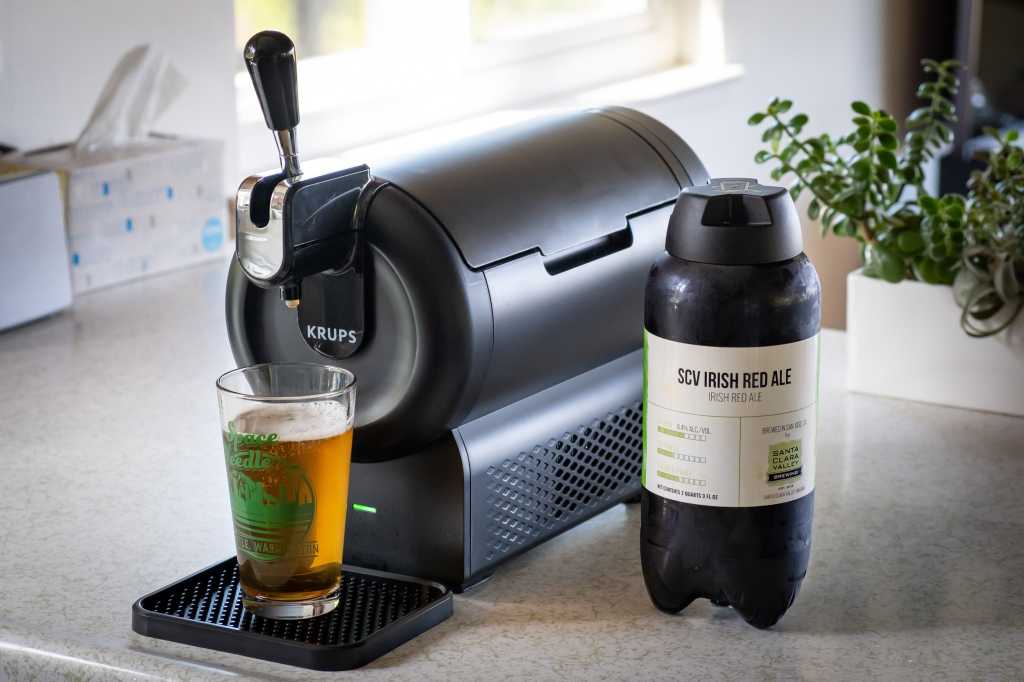 The Hopsy SUB Compact is a standalone mini-keg chilling machine with a paired delivery service. It’s a surprisingly fun package that ultimately just isn’t worth it.

When my editor suggested I review the SUB Home Tap Compact, a standalone mini-keg chilling machine with a paired delivery service, I thought, “That sounds perfect—who doesn’t want that?” But then I learned the kegs are proprietary, only hold just over 4 pints, and can take up to 12 hours to chill. Plus, the whole thing costs $200. So, the reality check inspired a new question: “That sounds horrible—who would actually buy that?”

Well, after using Hopsy for over a month, it’s exactly as I thought it would be—except that, surprisingly, I enjoyed my time with it.

The system’s key ingredient is the SUB compact, a chiller and tap designed by Krups that’s able to chill beer in ambient room temperatures up to 82 degrees. My home never got past the mid 70s during testing, and the chiller was able to cool a lager to a pleasurable 35 degrees—an indicator turns from red to green signifying readiness. The included manual says Hopsy can take up 12 hours to chill a keg at a room temperature of 72 degrees, but fortunately it took about 7 hours for a room in the mid 60s for me.

The manual recommends storing additional kegs (similar in size to 2-liter soda bottles) in your refrigerator, which really defeats the purpose of having a countertop appliance. The Hopsy is able to regulate pressure in the mini-kegs, but the pump emits a loud deep buzz and you’ll hear this when you install a new mini-keg or any time beer is poured. The unit feels well-built and it’s certainly stylish, albeit a bit large at 17.8 x 7.5 x 15.1 inches. It’s overall countertop presence evokes a large stand mixer. The Hopsy averages less than 20 watts to keep chilled, and if it ran 24/7 for a year, your energy costs might hit about $25.

Hopsy’s proprietary mini-kegs easily slot inside the chiller and include most of the dispensing tap system, so you don’t have to suffer the hassle of cleaning lines like you would with a conventional tap. Cutting open one of these plastic containers revealed a second plastic chamber within the outer one. Keeping the beer isolated in this internal chamber while the outside chamber is pressurized by the SUB prevents the beer from oxidizing and going bad.

Hopsy says the SUB can keep a mini-keg fresh for up to two weeks, and testing that timeframe seemed to prove the case—carbonation remained consistent and I never encountered discernable off-tastes. Each mini-keg costs anywhere from $10 to $21, holds 67 fluid ounces (the equivalent of a 6-pack or 4 pints of beer) and the beer is sourced from commercial breweries, most of which could be labeled as craft.

Hopsy says it’s able to provide fresher beer by shortening the supply chain and going from Brewery to Hopsy to the customer, sometimes in just a few days, but I didn’t see bottling dates on any labels. Adults 21 and older can purchase individual mini-kegs online as packs or as a regular subscription, but unfortunately Hopsy is only available to customers in California, New York, and Illinois, and you can only get beer delivered from breweries within your own state.

So is Hopsy worth the money?

Ultimately, there’s isn’t anything terrible about The Hopsy SUB—but there are a few reasons why you just don’t need to buy it.

If you prefer to have variety in your beer-drinking life, you’re better off buying 6-packs and storing a selection in your fridge. If you drink often or have frequent small get-togethers, four pints is hardly enough, and you’ll be faced with storing extra mini-kegs in the fridge (which entails regular replacement, and the noise that comes with it). In fact, if you entertain often, you’re better off going with a full kegerator that can handle standardized kegs from 2.5 gallons up to 15 gallons.

Furthermore, I wasn’t impressed with the beer selection. At the time of this writing and looking at California service only, the site offers only 15 beers from six breweries and five of those beers are brewed by Gordon Biersch. I don’t consider myself a beer snob and I think Gordon Biersch is fine, but the selection seriously lacks variety. Granted, I live in the Bay Area and the beer selection available at almost every nearby store is better—so maybe I’m spoiled. I encourage you to check out the Hopsy beer list and see if you feel the same. It’s worth noting that two of Hopsy’s partner breweries are Heineken and Dos Equis, which don’t necessarily scream high quality.

Finally, while I had no issues with temperature or carbonation, the whole system could be more intelligent, adjusting both the beer temperature and serving pressure to the precise specifications from the brewer for that particular brew. This is the kind of control a true beer enthusiast would expect to see.

After a full month of testing, I thought the whole concept was a bit silly, but I did find myself enjoying it for one simple reason: the ability to draw 6 to 8 ounce pours. Whether it be for small breaks during weekend house work or a nightcap before bed, I don’t always want to commit myself to a full 12 ounce beer.

All that said, I can really only recommend this for one type of person. If you drink often, but don’t drink very much at a single sitting, and don’t need a particularly large or distinguished selection of beers, the SUB Home Tap could be for you. Of course, you’ll also have to absorb the cost of the SUB and its beer service, have lots of counter space, and have no good beer available nearby.

Do you fit that bill? Then the Hopsy SUB Home Tap could be just what you need.