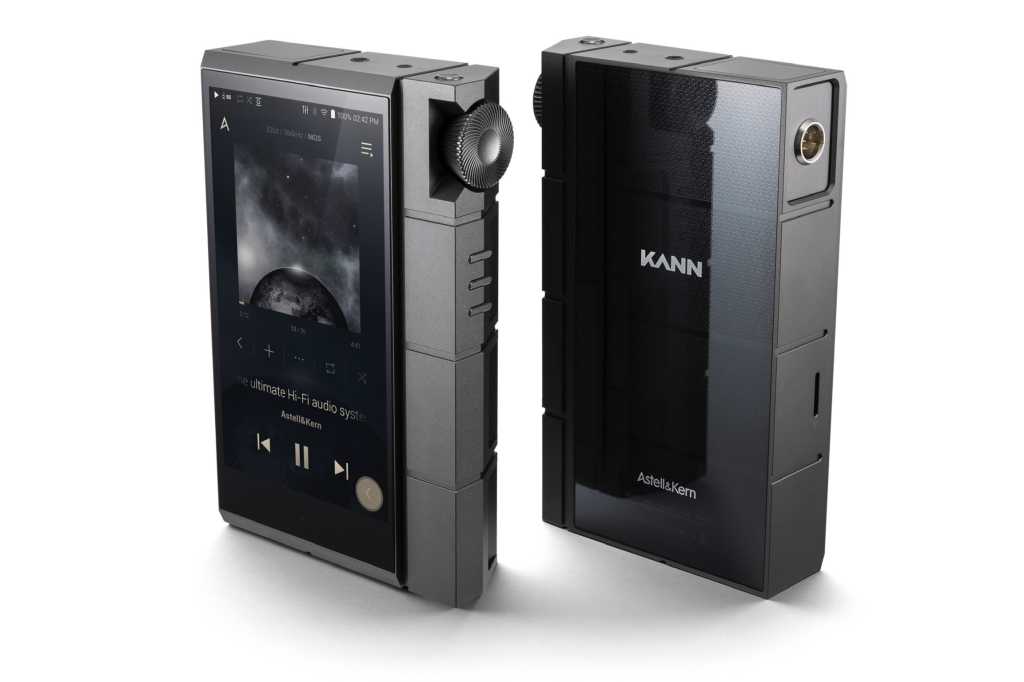 Astell&Kern’s Kann Cube is designed to drive almost any headphone on the market and serve as the high-res and streaming centerpiece of any reference audio system.

Astell&Kern launched its newest digital audio player today, the KANN Cube, at the Fujiya Avic Spring Headphone Festival in Tokyo, Japan. The KANN Cube is the second model released in Astell&Kern’s acclaimed line of KANN music players. About this time last year, I reviewed the original KANN, which Astell&Kern will continue to sell.

After spending a few weeks with the KANN Cube, I can say with confidence to anyone with an unquenchable yearning for a high-performance, feature-rich, high-res digital audio player that’s capable of driving just about any headphone, regardless of impedance level: The KANN Cube is what you’re looking for. But you’ll need deep pockets to indulge your passion: This device will cost $1,499 when it arrives at A&K dealers in June.

Astell&Kern design, through and through

Astell&Kern offers some of the most eye-catching high-res music players on the market, and the KANN Cube follows that tradition with a bold, hard, and unapologetic design. As with all Astell&Kern players, deliberate use of angles, shapes, and negative space abound. Look at the photos in detail to see what I mean.

The player is an amalgamation of seemingly infinite shapes. Add a light source, and you can spend  hours admiring the interplay of lights and shadows against its varied surfaces.

I will note that the KANN Cube’s milled-aluminum shell sports lots of hard angles. The corners felt especially sharp. You’ll want to take care that the KANN Cube doesn’t scratch delicate surfaces—such as your skin! (I’m told retail units will come with a case, which should ameliorate the sharp edges.)

Swooping lines on the large, knurled volume knob make it look like the eye of a hurricane. The player is outfitted with a big five-inch glass screen on the front, and a glass panel on its back. The large display rendered text and other lettering big and easy to read, and I enjoyed viewing album art on it.

A&K’s customized Android-based operating system has undergone a UI upgrade and it debuts on the KANN Cube. As you can see in the photo below, the volume indicator’s new visual motif is a pyramid pattern of lines that gets taller as you increase the volume (conventional digits are also displayed).

What’s on the inside is just as beautiful

Under the hood, the KANN Cube delivers a formidable array of features and audio tech that will make even the most demanding audiophile salivate. Let’s start with its amplifier stage.

The original KANN was notable for its power output, but the KANN Cube comes close to doubling it—12Vrms vs. 7Vrms—via its balanced output connection. There’s no need for an external headphone amp. Furthermore, you can match the KANN Cube’s power and performance to your headphone’s impedance and sensitivity by selecting low, mid, or high gain modes via the player’s settings menu.

These DACs are arranged in a dual-mono configuration, meaning there one DAC is dedicated to the left channel and one is dedicated to the right channel to form a stereo output. Most high-res players use a single DAC for both channels. Astell&Kern says the dual mono DAC design produces a wider sound stage and better stereo separation.

A quad-core CPU does all the heavy lifting, and I will say that the KANN Cube’s interface felt very fluid. I noticed many nuanced improvements in user experience attributable to the increased horsepower.

The KANN Cube supports up to 32-bit/384kHz PCM and DSD256 playback natively. Like its siblings, the KANN Cube supports just about every lossless and lossy codec on the market, including FLAC, ALAC, WAV, APE, AIFF, DFF, DSF, OGG, AAC, and MP3. It will also play DSD files via DoP (DSD over PCM), in which a DSD file is sent on top of PCM data frames. The player won’t, however, play protected AAC files, such as those downloaded from Apple Music’s subscription-based streaming service. Mac users will need the free Android File Transfer app to copy music files to the KANN Cube’s internal storage.

The KANN Cube has a full MQA decoder built in, and MQA playback is supported both via downloaded MQA audio files and through the Tidal app (for those who subscribe to the Tidal Masters tier of that music-streaming service).

Support for aptX HD means the KANN Cube can wirelessly stream music over Bluetooth in 24-bit resolution at a 48kHz sampling rate. I tested the player with a pair of Bowers & Wilkins PX wireless headphones, which also support aptX HD, and the KANN Cube confirmed an aptX HD connection.

This is no pocket-sized player

Astell&Kern’s original KANN was large, but nothing prepared me for the KANN Cube’s weight and form factor. “This thing is a tank!” was my visceral reaction when I unboxed it. My wife said it reminded her of Sony’s cassette-based Walkman from the early 80s. I could barely fit the KANN Cube into my front pocket and found I was better off using a backpack to take it on the go—or at the very least, stuffing it into an outer coat pocket.

I actually don’t think Astell&Kern has any intention of marketing the KANN Cube as a mobile player. Rather, given the robust amplification section, I think the company is targeting consumers who want a transportable high-performance player and headphone amp that they can pair with very high-performance headphones at home or at a hotel or resort.

For home use, Astell&Kern went so far as to incorporate a five-pin mini XLR audio output, giving serious music listeners the option of connecting the KANN Cube directly to a high-performance stereo system.

I was told my review sample was one of just a few early units, which is why it arrived with just a a USB-A to USB-C charging and synchronization cable. I confirmed with an Astell&Kern representative that the production packaging will also include a case for the player, which I’d didn’t get a chance to evaluate.

Any Astell&Kern’s player can serve as the hub of a high-resolution music-listening system, but the Kann Cube takes that concept to the next level. If you consider it simply as a music player, you’ve missed the point of having all of that power under the hood.

In addition to using it on its own, you can connect the KANN Cube to your Mac or PC and use it as a high-end USB DAC. It can operate as a network client device to a DLNA media server (and Astell&Kern offers its own server in the form of the MQS Streaming Server for Windows and MacOS). And the free AK Connect mobile app (available for Andriod and iOS) creates a seamless bridge between the KANN Cube and the smart device the app is running on. You can even use the app as a remote control for the KANN Cube—or for any Astell&Kern player for that matter.

The KANN Cube is outfitted with 128GB of internal storage, and it has a microSD card slot capable of hosting cards with up to 1TB of memory. If that’s still not enough to store your music library, my Astell&Kern contact tells me the player will be capable of reading 2TB microSD cards when those come to market (assuming they adhere to current standards).

The player’s 7,400mA battery supports fast charging and can play back music continuously for up to nine hours on a single charge.

Although Astell&Kern’s operating system is based on Android, the company doesn’t allow users to install Android apps via the Google Play Store. That limits the number of music-streaming services you can use with its players, a list that’s typically limited to Tidal and perhaps one or two others.

What’s even better than the diversity of services is the fact that Open APP Service enables offline listening modes for the streaming services that offer that feature. Before this, you couldn’t download music from any service to any Astell&Kern player. I can’t tell you how many times I wished I could download tracks from Tidal to other A&K players, so I could listen in places I didn’t have access to Wi-Fi.

On the downside, using the current implementation of Open APP Service is a clunky experience that consists of downloading an application installer to a predefined folder on on your A&K player, and then finishing the installation on the player itself.

Here are the steps:

Once successful, you’ll be able to access the apps through the same menu. Astell&Kern has detailed step-by-step instructions here.

The KANN Cube is that teacher you had in school who you were afraid would tear your work apart. Put another way, the KANN is among the most brutally honest high-res DAP’s I’ve auditioned. That’s a serious compliment to the KANN’s musical prowess and power. It will reproduce well-recorded music in all its glory as though you’re hearing those works for the first time. Conversely, it will lay bare any shortcomings in your sources.

The KANN Cube reveled in playing the DSD version of John Coltrane’s Blue Train, creating a beautiful, seamless sound stage on “I’m Old Fashioned” and “Locomotion,” with instruments firmly placed in space and time. The instruments sounded alive with detail.

The KANN Cube did a beautiful job of rendering music and then getting out of the way, so that my headphone’s character could shine through. The B&W P9’s warmth, intimacy, and bass response abounded. The Focal Clear’s spaciousness, delicacy, detail, and superb attack were ever present. No matter which headphone I tried, the KANN Cube exerted masterful control, holding an iron grip upon the drivers and commanding their every move.

The KANN Cube excelled in its dynamics, details, and realism. Even intimate tracks such as Rebecca Pidgeon’s “Spanish Harlem” sprung to life. Against the Cube’s silent background I could follow the last decaying sounds of guitar strings on Patricia Barber’s “Taste of Honey.” And on Pink Floyd’s “Welcome to the Machine,” the opening machine sounds gushed forth firmly placed in space and time, rife with detail and realism.

The KANN Cube elevated my experience of every musical genre: Classical, Jazz, R&B, and Rock to name but a few.

But don’t mistake the KANN as clinical. I got chills when Yo-Yo Ma’s Cello kicked in on “The Swan (From ‘Carnival of the animals’)” from Yo-Yo Ma’s and Kathryn Stott’s album The Arc of Life.

Astell&Kern’s new KANN Cube high-res music player is a big, bold, powerhouse. It has a big footprint and an equally big price tag. But its massive size and weight are equaled by superb performance. While the KANN Cube is designed to drive nearly any headphone on the market, its rich streaming feature set, AK Connect control app, and mini XLR output make it a serious contender to displace competing streaming players for any high-end sound system.