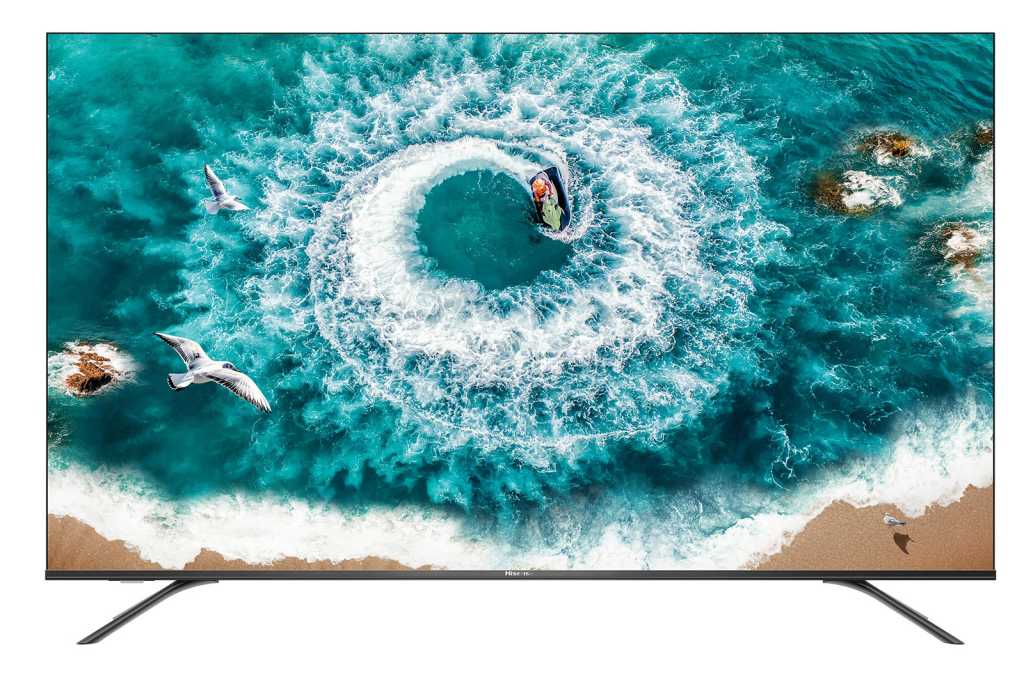 Rich color, 600-nit brightness, much-improved blacks (over the 2018 model), and HDR sizzle are not something we’ve associated with a $500 TVs until now. This is a great TV for the money.

I was skeptical about Hisense’s move to array backlighting for its 2019 H8F 4K UHD TV series. Just last year, even the company’s second-tier H9E was side-lit, and first forays into technology don’t always turn out so great.

Well, the H8F may not be “great”—that’s $2,000 LG E8 and Samsung Q9 territory—but for just $500, you get the high-quality color, blacks, and HDR of a much more expensive TV. In fact, after 15 minutes with the H8F, I double-checked the price list just to make sure I hadn’t confused it with something else. I was that impressed.

The H8F is a 4K UHD TV available in the 55-inch flavor reviewed here as well as 50- and 65-inch SKUs. The 55-inch model weighs about 30 pounds and measures 48.4 inches wide, by 28.1 inches high, by 2.4 inches at its deepest point. Add another 2.5 or so inches in height for the stand. It’s handsome, with a thin-bezel, and offers the first solution to a problem I ran into myself not so long ago—stand feet that are too widely spaced for the surface I wanted to set the TV on.

The H8F is also wall-mountable via a 300mm x 200mm mount point using M6 screws. The electronics and ports are housed in the usual plastic gluteus maximus, which you can see in the side-angle image below.

The port array consists of a single coax connector for antennas and cable, four HDMI 2.0a ports (ARC and CEC are supported), one USB 3.0 and one USB 2.0 port, RCA composite video and stereo audio outputs, optical S/PDIF audio out, and a headphone jack. There’s also 802.11ac Wi-Fi and Bluetooth 5 on board as well as 10/100Mbps ethernet.

The H8F also supports both Amazon Alexa and Google Assistant. There’s also a channel list, but no program guide.

The remote is on the large size, but is more logically laid out and focused than many, and it’s easy to use. It’s not universal, but I actually like it better than the remotes that ship with Sony’s high-end TVs. That’s more of a comment on Sony than Hisense.

The H8F runs Android, and Hisense delivers a nice, uncluttered homepage, unlike some Android implementations I’ve seen. Everything works better if you sign on with Google, of course; something I don’t like to do because I don’t like the company’s privacy policies. But don’t let that stop you.

There are separate settings menus, which are generally easy to use, although I have one minor quibble: the cursor always highlights the uppermost setting in the list which is generally “off,” as opposed to the setting currently in use, which is the standard behavior. It took me quite a while to get used to. It also caused more button use as I generally wanted to choose the next lower or higher setting, not turn a function off. This behavior got aggravating there for a minute, but I did not throw the remote.

That’s because as much as I disliked all the cursor movement, I liked that adjustments could  be performed in-line, i.e., you don’t need to press enter before you start adjusting, you just hit the right or left edge of the rocker control. Yin and yang. I am, of course, being picky.

Should you be the same (picky, that is) about color matching and the like, there are a plethora of tweaking settings if the defaults and brightness, color, and tint controls don’t cut it for you. It’s rare these days for a TV to come from the factory with poorly adjusted color, and the H8F’s wasn’t, but if you want to have at it, by all means.

I’ve already confessed that I wasn’t expecting such a good picture for so little cash. The H8F’s color is accurate (90 percent of DCI) and nicely saturated; general large-object motion is smooth for a 60Hz display (when you choose the “smooth” setting under motion compensation); and I measured 600 nits of peak brightness. Hisense claims 700, but our meter generally reads a bit low. But even 600 was enough to make HDR pop reasonably well.

The H8F supports Dolby Vision as well as HDR10, and it rendered both types without issue. To make a long story short, this year’s H8F does HDR way better than last year’s far more expensive H9E. The blacks were far better than I expected, and there were no array backlighting defects, such as blockiness that I could spot. For general viewing, I was quite enamored.

Alas, where the H8F stumbled was with detailed backgrounds and patterns in motion, which generally produced a large amount of shimmer and moiré. This diminished greatly when I reduced the sharpness of the image, but that of course also resulted in a corresponding loss of detail. You’re kind of picking your poison with this aspect, though there’s not a lot of material that will force the choice.

There were also the occasional very minor stutters with pans of any type when I was playing videos from a USB stick. This could be poor handling of different frame-rate conversion, but it also hints at a rendering engine (i.e., CPU and memory) working at its absolute limits. The effect varied by material and I wouldn’t call it a major issue, just an imperfection you’d expect at this price point. Other signs of somewhat slow processing is the very slow channel search and somewhat laggy channel changes.

Screen uniformity was one other area where the H8F I tested was a tad lacking. There were some noticeable cloudy areas, especially in the corners. I say noticeable, but that’s under scrutiny with the very bright singl- color backgrounds I use to spot such things. During everyday viewing with everyday material, the imperfections are barely visible. All these flaws are minor, but are also things you need to be aware of.

Consumer Reports recently called Hisense TV reliability into question. I talked with Hisense about this, and while its representatives didn’t argue with CR’s findings, they did wonder what time period the publication was talking about. The implication being that more recent Hisense TVs deliver better craftsmanship than older models. That could also be construed as a confession, but we should appreciate the candor. It’s rare in the TV biz.

The H8F’s fit and finish are very good, but as with any TV, I can’t vouch for the electronics inside. I will say that Hisense seems bent on competing with the big boys, so I’m guessing quality is a running concern and has been improved.

A very good TV for not a lot of money

All told, this year’s H8F is far superior to last year’s, and more importantly, to any other $500 55-inch TV I’ve seen. Hisense has definitely raised its technology game and consumers are the beneficiaries. If you’re shopping in the budget category, this one is a must-see.

Note: This article was amended to replace H9F with H9E, the actual model designation from last year.