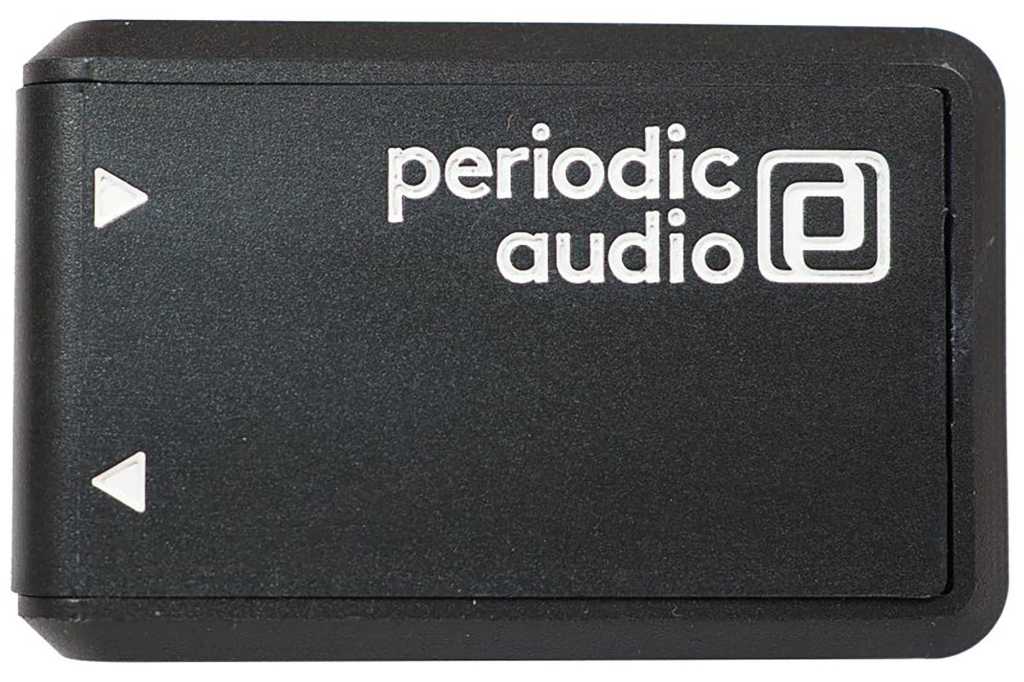 Periodic Audio’s Nickel portable headphone amplifier will break you of the habit of listening to music on headphones plugged into your smartphone, tablet, or laptop.

And that’s how most of us listen to music these days, right? Dedicated high-resolution digital audio players deliver superior audio performances, but mobile devices are just so much more convenient—even when we’re using the type of high-end, high-impedance cans that more general-purpose mobile devices find so difficult to drive.

Modern computers and mobile devices have much better digital-to-analog (DAC) converters than they used to, but the headphone amplifiers on those products remain the weakest link in the audio reproduction chain. The Nickel is a high-end, battery-powered, portable headphone amp that promises to wring peak performance from just about any wired headphones, including high-impedance models.

The Nickel is absolutely tiny—it’s about the size of a 9-volt battery—and it sits between your music source and your headphones, performing a simple yet important task: Amplifying the source’s audio signal with enough power to control a headphone’s drivers with precision. During my listening tests, the Nickel noticeably improved the performance of  headphones. Users with high-quality and/or difficult-to-drive headphones will realize the most benefit.

The Nickel is simple to use: Just plug the included 3.5mm cable into your smart device (any smartphone that doesn’t have a headphone output will require an adapter), your headphone’s 3.5mm cable into the Nickel, and voila! The Nickel turns your smart device into a preamp and does all the heavy lifting to improve your headphones’ performance. The included 3.5mm-to-3.5mm analog cable has mic pass-through, so you’ll able to use an inline microphone with the Nickel.

I do wish Periodic Audio had put a headphone icon next to the Nickel’s output jack and labeled both the front and back of the unit. At one point during my testing, I wasn’t paying close attention while switching cables. and I accidentally connected the cables backwards—producing a loud, piercing sound through my headphones.

The Nickel is a far more elegant and unobtrusive solution than some of the larger amps out there. But it’s unfortunate that Periodic Audio doesn’t provide a graceful means of mounting the Nickel to your smart device—the amp will just dangle by its cable.

No controls to worry about

Further adding to the simplicity, there’s no volume control on the Nickel. You don’t need one since your smart device has its own volume control.

The Nickel is designed with 6dB of internal gain, a feature that came in handy during my tests—especially with the somewhat difficult-to-drive Beyerdynamic Amiron Home, which have nominal impedance of 250 ohms.

Periodic Audio claims that the Nickel—which weighs a mere two-thirds of an ounce—is the smallest and lightest high-powered analog headphone amplifier on the market. The amp’s shell is fabricated from a strengthened polycarbonate material that Periodic Audio says is highly resistant to cracking.

The Nickel presents an input impedance of 10k ohms to ensure the amplifier in your smart device or computer is never stressed. Periodic Audio says that eliminates 99-percent of the poor sound you get from those sources. Nickel’s inputs are AC coupled to eliminate any issues from DC offset (which can produce buzzing and other issues). The amplifier’s circuit is DC coupled on the output, providing bandwidth from 8Hz to 80kHz, a signal-to-noise ratio of 105dB, total harmonic distortion of less than 0.005 percent, and greater than 80dB of channel separation. Periodic Audio’s measurements are performed at 1mW @ 32 Ohms (179mV). That’s considered a typical listening level, not maximum.

The Nickel is capable of pumping out 250mW per channel of continuous power into a 32-ohm load, and nearly 500mW per channel into 16- or 8-ohm loads. A representative from Periodic Audio told me they’ve even tested the Nickel on high-efficiency home loudspeakers.

The Nickel won’t drain your smart device’s precious battery life. Designed to be a portable companion, the Nickel comes with its own rechargeable 280mAh Lithium Polymer battery that Periodic Audio says will provide up to 10 hours run time at loud listening levels. The battery is a high-current design that completely recharges in about 30 minutes via a micro-USB port. You even can use the Nickel while it’s charging.

The battery is completely isolated from the amplifier stage with a discrete +/- 5V power supply circuit. I used the Nickel while charging it and never heard any charging noise or interference. The Nickel’s signal-to-noise ratio stays the same whether it’s charging or running on battery.

Cell phones can wreak havoc on nearby electronic devices—you’ve most certainly experienced the audible interference. The Nickel is immune to any such interference thanks to its Texas Instruments INA1620 amplifier.

The TI INA1620 is EMI/RFI hardened, rendering the Nickel virtually immune to RF and GSM noise. That means you can place the Nickel right next to your cell phone with  zero impact.

I tested the Nickel with Focal Clear and Beyerdynamic Amiron Home headphones on an iPhone XS, using Tidal as well as high-res and lossy music streamed from my Roon Nucleus music server. I was careful to level match during my A/B comparisons.

Needless to say, it didn’t take long to hear the difference the Nickel made on the music. The Nickel immediately refined and improved the performance through both headphones.

Playing Lauren Daigle’s “You Say” was more exciting with the Nickel in the mix. Bass had more impact and control. The song’s overall presentation was more dynamic, too. In particular, the chorus of voices in the song’s refrain came alive as though infused with new life through the Nickel. Voices took on more definition and refinement. Taking the Nickel out of the mix and playing “You Say” straight from the iPhone XS made the song sound comparatively dull. The Nickel didn’t simply change the technical performance; it affected a song’s emotional impact, too.

Song after song, I noticed more detail, better control, less haziness, and—ultimately—more musical involvement. For example, on Dido’s new album, Still on My Mind, the bass on “Take You Home” instantly tightened up compared to the iPhone playing sans Nickel.

I also noted that the Nickel had the ability to bring out a warmer, richer sound from the music. Dido’s “Hell After This” had far better tonal balance through the Nickel, to the point where I found myself being more emotionally drawn into the music and the artist’s performance. But it was the Nickel’s ability to breathe life and color into the guitar on “Some Kind of Love” that was the finishing touch.

Periodic Audio’s Nickel headphone amplifier has the uncanny ability to make music come alive through the headphones you love most, even on an average smart device or computer. High-quality headphones and difficult-to-drive cans will benefit most. Judge for yourself, but the Nickel probably isn’t worth the expense if you’re using entry-level headphones or sticking with whatever came with your smart device.

That being said, I’d classify the Nickel as a must-have accessory for the music lover or audiophile who wants to use high-quality headphones without the hassle and expense of also carrying a dedicated high-res DAP. The Nickel’s tiny size, light weight, excellent battery life, and simple operation makes it easy to use on the go. And the sonic benefits are simply intoxicating.