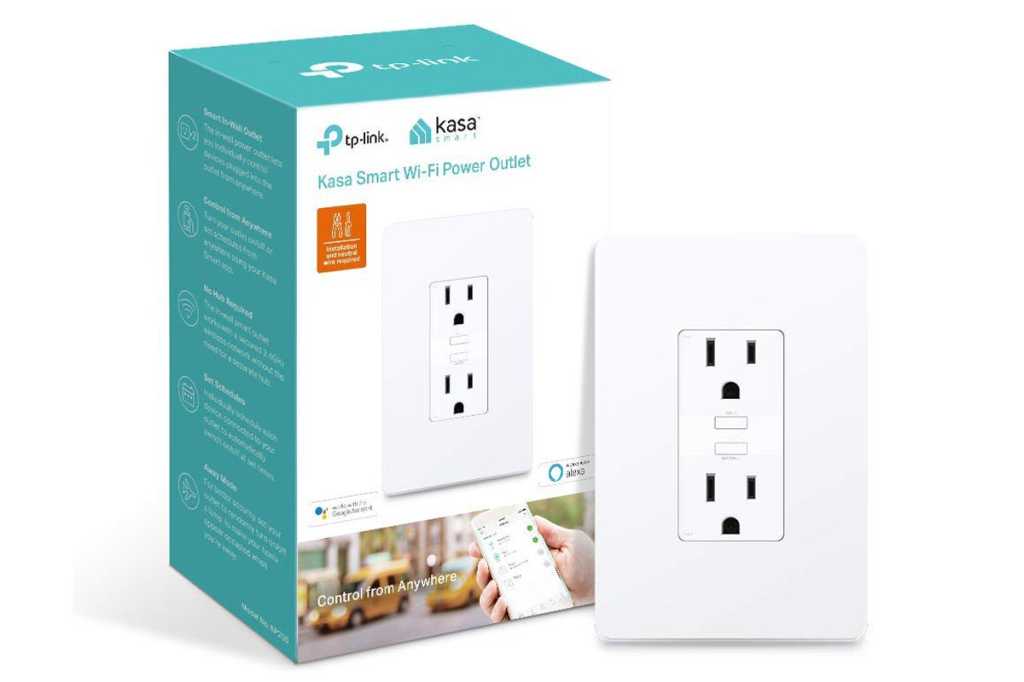 Image: TP-Link
At a Glance

This Wi-Fi-connected, in-wall outlet covers the basics and works without issues, but it’s not the right choice for Apple HomeKit fans.

TP-Link’s Kasa smart home line has long included a variety off plug-in smart outlets, and now the brand is extending into the wall. With its Kasa model KP200 Smart Wi-Fi Power Outlet, TP-Link offers a compelling way to turn any old outlet into a smart one—no smart hub required.

Wiring the Kasa KP200 isn’t really any different than any other in-wall smart outlet on the market. The unit is designed with three pigtails extending from its chunky base. Using the included wire nuts (or larger ones, as I had to use due to extra wires inside my junction box), you simply attach the three pigtails to the color-corresponding line, neutral, and ground wires, and then push everything back into the box.

As with most smart outlets, the product includes a white cover to match the white outlet. This simply snaps on to the outlet once you’ve attached it to the wall with the two built-in screws, though affixing it securely can be a little tricky.

TP-Link doesn’t include an actual manual in the box. Rather, the Kasa app walks you through the setup process in considerable detail. Even if you’ve never rewired an outlet before, it’s difficult to get lost along the way. This one is limited to 15 amps, though, so you might not want to install it your kitchen (most modern kitchens have 20-amp service to handle countertop appliances).

Once the hardware is in place, the Kasa app takes over. This app is basic and intuitive, prompting you to join the device to your Wi-Fi network, name each of the two sockets, and then assign them an appropriate icon. I installed the outlet where we always put our Christmas tree, and I was pleased to see there was an even an icon for that included.

The outlets are individually controllable and programmable, and you can set up schedules, and timers to turn the outlet on or off after a certain length of time. There’s also an away mode, but that’s really just a custom version of the scheduling system. The Kasa KP200 does not include energy consumption reporting, but it does report the amount of time each outlet was on over the current day, the previous 7 days, and last 30 days. This feature isn’t not hugely useful, but it’s at least something in the way of metrics.

When a socket is active, a small LED adjacent to that socket glows. These LEDs are built into tiny, manual on/off switches that are located in between the two sockets. (The LEDs can be turned off in the app, along with a third LED that indicates if the outlet has Wi-Fi connectivity.) If you don’t want to bother with the app, you can always push these buttons to turn the outlet on or off, but they’re so small that you’ll probably need to use a fingernail in order to reach them. Note as well that large plugs or power bricks will cover up those buttons.

Kasa devices work with Alexa and Google Assistant, and I was surprised to receive a message in the app during setup that said my new outlet had automatically been discovered by Alexa and was ready to use, presumably because I already had the Kasa skill installed. That didn’t turn out to be the case, though, and I had to tell Alexa to search for new devices (via the typical method), and then setup each outlet individually. After that, telling Alexa to turn the outlets on or off via the names I’d given them in the Kasa app worked perfectly.

At $40, Kasa’s in-wall outlet is priced in line with similar devices, but is much cheaper than other premium products such as the iDevices Wall Outlet, which now runs about $70. Sure, the Kasa is missing a few luxe features like energy monitoring and a color-tunable nightlight, but for users with basic needs—and don’t care about HomeKit support—it fits the bill quite well.