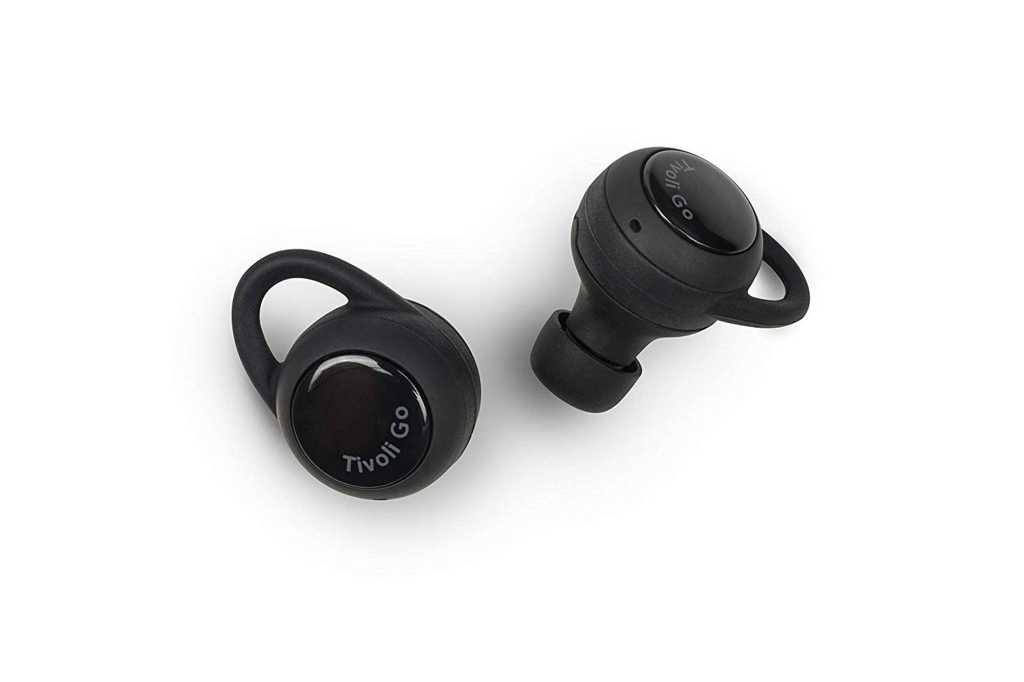 Image: Tivoli Audio
At a Glance

My experiences with past Tivoli products led to high expectations for its Fonico true wireless earphones. And based on my initial out-of-box experience, I thought I’d have a similarly high regard for this new product. But in tech, as in love, first impressions never tell the whole story.

The Fonico feature a cute, clean industrial design. The black buds are no bigger than a dime in diameter, and they weigh just 4.5 grams a piece. Set up with an integrated ear loop (in two sizes and in your choice of black or red finish) and the option of three sizes of ear tips, these things hold very firmly in place. That makes them good for exercise stints, even in drizzly weather, given their rain- and sweat-shedding IPX5 rating.

Their diminutive proportions would have you believe they’d fit flush. But in my ears, the Fonico needed a tilted insertion that looks a tad goofy. On the upside, the angle makes it easy to press the multipurpose action buttons on the buds’ backing shells to raise/lower the volume, skip forward and backward through your playlist, answer and end calls, and summon your smartphone’s digital assistant. That’s not really my favorite control arrangement; I prefer having dedicated buttons that don’t require you to memorize that a short tap performs one function, multiple taps another, and holding the button down does something else entirely.

The capsule-shaped recharging case is genuinely appealing, though, with a magnetized lid that’s easy to open and close. Inside the case, a smartly notched and magnetized tray is perfectly set up to suck down or release the buds, the latter without needing to claw at them (the curse of Apple’s AirPods and their case). When closed, the hard rubber-finished case slides discretely into a snug jeans pocket and seems unlikely to slide out accidentally, which can be an issue with Apple’s glossy, slippery AirPods.

On with the show: My good impressions lingered when I pressed the Fonico into my ear canals, achieving a tight seal that wouldn’t start to hurt for about two hours. Now an ear-pleasing concert could commence, starting with India Arie’s new and aptly titled Worthy, a celebration of neo-soul originals (and of a love she never anticipated). The album oozed with intimacy and warmth via the Fonico, with a vital vocal presence and a deep bottom rhythm section that kicked butt.

Hayes Caryll’s fresh alt-country What It Is underscored his slyly comic life lessons with a spritely, well-articulated cast of acoustic fiddlers and pickers. I can’t say the recording/mix quality is all that great on Bruce Springsteen’s latest streaming/download-only collection of concert tracks, The Live Series: Songs of Friendship (think “Growin’ Up,” “Spirit in the Night,” “Glory Days”); but with my eyes closed, I sure felt the arena vibes and audience kinship through the Fonico.

So what’s wrong with this picture?

The Fonicos are equipped with Bluetooth 5.0 radios, which allowed me to wander more than 35 feet from a music-streaming source without the signal fading. Ironically, however, my sample buds suffered from a recurring short-range communications problem. I experienced momentary drop-outs that would take down either the left or right earphone—but never both at the same time.

The malady would happen most often—on the order of every five minutes—whenever I was in motion, e.g., strolling down the street. But I also experienced recurring dropouts sitting perfectly still at my kitchen counter and at my computer. These gaps would last for less than a second, but when you’re really listening with intent, those dark holes will drive you insane.

The communication breakdown was not platform specific: It happened with both an iPhone X and—though perhaps to a lesser degree—with a Samsung Galaxy S8. And I experienced dropouts both with music streaming from online music services (Tidal, Napster, Amazon, Tune-In) and while streaming music stored on the respective smartphones.

I of course replayed some of the tunes to nix the possibility that the drop-outs were on the recordings themselves. A system software tweak might fix things. But as these earbuds don’t come with a dedicated app or user-upgradable firmware, the improvement would only be available on new units rolling off the production line.

Four LEDs indicate the charging case’s battery level, but after inserting the buds, you must push a button above those LEDs to initiate their charging. Most of Tivoli’s competitors start charging their buds automatically as soon as they’re returned to the case. Blue LEDs on each of the Fonico glow when the earbuds are in your ears and powered up, but you’ll need to look in a mirror to see them.

And again, unlike most of Tivoli’s competitors, the Fonico don’t automatically power down to preserve battery power when you take them out of your ears. They’ll do that only when returned to their case or five minutes have passed with no input signal. Playing devil’s advocate, I suppose it could be argued that not automatically recharging the earphones whenever dropped into their case will ultimately prolong the life of the 460mAH Lithium-Polymer power pack.

Battery run time per charge is accurately quoted as “better than three hours.” In fact, I’ve been enjoying stereo playback for exactly three hours and then, as a bonus, can listen to a blended mono sound signal playing in just one earbud (the other’s gone dead) for an additional 40 minutes. Two or three recharges of the earbuds are possible from the backup battery in the carry case, each time taking about 90 minutes. If the case is plugged into a USB power outlet with the supplied (USB-C to USB) cable, it then takes about 2.5 hours to collectively recharge the earphones’ own batteries and the backup battery in the case.

Making calls on the Fonico is a mediocre experience at best, commencing when you tap and hold either of the multifunction buttons precisely for two seconds. Press and hold the right ear button for three Mississippi’s and you’ll instead skip to the next track in your playlist. Annoying. It’s a plus that the party you’re talking to is heard through both ear pieces, but they will complain that your voice sounds extremely muffled and barely intelligible, even when you’re schmoozing in a quiet setting.

So I have no complaints about the Tivoli Audio Fonico’s musical performance, at least when the music isn’t dropping out on me, but these true wireless earphones have too many other eccentricities to earn a solid recommendation. In fact, I’d suggest waiting for version 2.0 before investing in a pair.