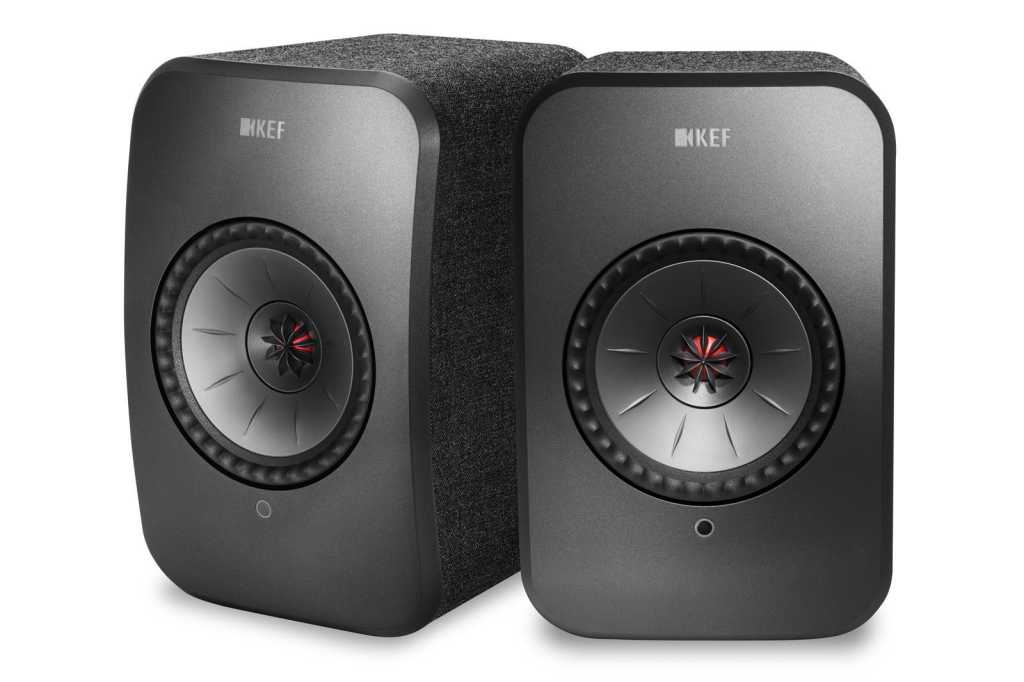 The KEF LSX Wireless Music System offer a lot of bang for a lot of bucks. But regardless of price, the sound quality is hard to beat with any speakers of such small size.

Founded in 1961, KEF is a well-known, high-end British speaker brand with many outstanding products to its credit. These days, small wireless speakers are all the rage, and KEF has embraced that market with several models, including the new LSX. Let’s see if it’s worthy of KEF’s legacy.

The KEF LSX is relatively small, measuring 9.5 x 6.1 x 7.1 inches (H x W x D), but it feels quite substantial (weighing just under eight pounds). To match almost any decor, it’s available in five colors: black, green, blue, red, and gloss white. In each case (except white), the sides, top, and bottom are wrapped in a color-matched fabric from Danish textile designer Kvadrat.

A gently convex front baffle helps minimize diffraction of sounds from the driver. Speaking of which, the driver is a KEF-developed Uni-Q coaxial design. A 0.75-inch aluminum-dome tweeter is located at the center of a 4.5-inch magnesium/aluminum alloy-cone midrange/woofer. This configuration is intended to make sounds from both transducers radiate from the same point and improve stereo imaging.

The Uni-Q driver is powered by amplifiers providing 70 watts for the midrange/woofer and 30W for the tweeter. KEF specifies a frequency range (-6 dB) up to 47kHz; the low end of that range depends on the Bass Extension setting in the KEF Control app: 49-, 52-, or 55Hz. By contrast, the frequency response (±3 dB) is specified up to 28kHz and down to 54-, 59-, or 69Hz, depending on the Bass Extension setting. The low end is enhanced by a port on the back of the speaker as well as KEF’s Music Integrity Engine digital signal processing. The maximum output is spec’d at 102dB SPL.

As a wireless speaker, the LSX accepts audio via Bluetooth 4.2 (with support for the aptX codec), and it will remember up to eight Bluetooth devices. It will also support Apple AirPlay 2 in a soon-to-be-released firmware update. Update, June 3, 2019: KEF announced today that it is rolling out a firmware update to enable AirPlay 2 on its LSX speakers. In addition, it can stream music from online providers Tidal and Spotify as well as local NAS drives or computers via DLNA over your home’s Wi-Fi network (2.4- or 5GHz, 802.11a/b/g/n).

The LSX supports digital-audio streams with resolutions up to 192kHz/24-bit. Ethernet connections, however, max out at 96/24, and wireless connections are limited to 48/24, so anything higher is downsampled as needed.

This speaker is sold in pairs; one is called the Master and the other is called the Slave. The Master provides all the connections on its back panel, including a TOSlink optical digital-audio input and a 3.5mm 2-channel analog-audio input as well as a hardwired ethernet connector for greater bandwidth on your network. Other connections include a USB port for audio on a USB storage device and an RCA subwoofer output if you want to add a sub to the system.

Normally, the two speakers are paired wirelessly using a proprietary 2.4GHz wireless signal, but a dedicated RJ45 connector on the back of both speakers lets you connect them with an included ethernet cable if you wish. (As with wireless streaming, a wireless connection between the speakers is limited to 48/24 audio, while a wired connection allows up to 96/24.)

Rounding out the Master’s back panel are three buttons that facilitate Bluetooth pairing, Master/Slave pairing, and resetting the system. Normally, those buttons aren’t needed, since you set up the system using an app on your mobile device (more in a moment).

I usually do not comment on the AC power receptacle, but I will in this case. The LSX uses a 3-prong grounded power cord—which is good!—but the receptacle is not IEC 320 C13, which is nearly ubiquitous, at least in the US; it’s IEC 320 C5, which you can see in the photo of the connections. When I asked KEF about this, they replied, “The footprint for the 320 C5 connector is slightly smaller, and with the physical space available, that small amount of saved space was important.” Still, I wish it was C13, which would make it much easier for many owners to replace a lost power cord.

Each pair of LSX speakers comes with a small remote control with six buttons: power on/off, source select, volume up, volume down, mute, play/pause, skip forward, and skip back. It feels good to the touch with a matte-black finish.

You set up the speakers using the KEF Control app, which is free for Android and iOS devices. The app guides you through the setup procedure (which I’ll discuss shortly), and then displays the main screen that lets you select the source, control playback, and mute the speakers.

From the main screen, you can select Settings, which provide a variety of controls. These include connecting the two speakers with an ethernet cable rather than wirelessly, inverting the L/R speaker assignments, setting standby-mode time, setting volume increments, initiating firmware updates, and others.

Also from the main screen, you can select the KEF Audio Signature controls, which let you create and save profiles based on the placement of the speakers in your room and your individual preferences. These controls are divided into two groups: Basic and Expert.

The Basic controls include whether the speakers are on stands or on a desk, the distance to the wall, the acoustic characteristic of the room (damped, moderate, or lively), the size of the room, and whether you have a sub connected. The Expert controls include a treble trim, phase correction, bass-extension setting, high-pass mode, subwoofer crossover, sub gain, and sub polarity.

How we tested KEF LSX speakers

I placed the KEF LSX speakers on top of the main speakers in my master bedroom, where I could try them out using Bluetooth and an optical cable from the TV. The KEF Control app guided me through the setup process step by step. All went smoothly until I got to connecting the speakers to my Wi-Fi network; the app didn’t see the speakers in its network list.

I hit “Can’t locate speaker,” and the app informed me that the light on the Master should be blinking amber and white; it was blinking amber only. The app instructed me to reset the speakers using a paper clip in the tiny reset hole, after which the light blinked amber and white. The app then found the speakers in the network list, and the rest of the process went without a hitch.

It’s possible to set up the LSX speakers without Wi-Fi, but that limits the system’s functionality and is not generally recommended.

As I was listening, I played with the sound settings in the KEF Control app. After specifying that the speakers were on stands rather than on a desk, I set the size and acoustic characteristic of the room as well as distance to the wall. The distance-to-wall slider has no indication of its actual setting; it only indicates the smallest and largest settings (50cm respectively). I wish it had a numeric indicator under the slider itself, like some of the other sliders do.

The effect of the Treble Trim and Bass Extension controls is subtle; I found that I preferred the default settings. In particular, the Extra bass setting sounded a bit boomy.

I listened to a variety of selections from an iPad via Bluetooth. First up was “Autumn in New York” from the Heath Brothers’ album After Midnight. The sound was beautiful; the acoustic bass was deep and throaty, the tenor sax was faithfully rendered, and the piano and drums were nice and clean.

Ancient Future is one of my favorite world-music fusion groups, so I listened to “Semara” from the album Planet Passion. Mathew Montfort’s scalloped-fret guitar was crystal clear, as were the ethnic flute, cello, tablas, and an Indonesian metalophone (sort of a metal xylophone). I was especially impressed with the sharp transients of the tablas and metalophone. “El Zaffa” from the same album has guitar, electric bass, a string section, and various ethnic percussion, and all were rendered faithfully with superb delineation of the instruments.

Next up was Billy Joel’s “River of Dreams” from his album of the same name. I was immediately stunned by the expansive imaging I heard. In particular, the background vocals were spread precisely across the entire soundstage, and Joel’s voice and piano were clearly delineated along with the bass, guitar, and drums.

For a mostly electronic sound, I turned to Loop Guru’s “White Light” from the album Loop Bites Dog. The entire sound was rich and full, with excellent synth bass. Likewise, the imaging was quite expansive.

Moving on to orchestral music, I listened to the Final Waltz and Apotheosis from The Nutcracker by P.I. Tchaikovsky as performed by Valery Gergiev and the Orchestra of the Kirov Opera. The balance between the different instrumental sections was superb, and the dynamic range from the quiet beginning of the apotheosis to the crashing conclusion was artfully rendered.

Another of my favorite groups is Oregon. “Rewind” from the album Beyond Words consists only of guitar, soprano sax, and acoustic bass, each of which were reproduced beautifully with excellent delineation. 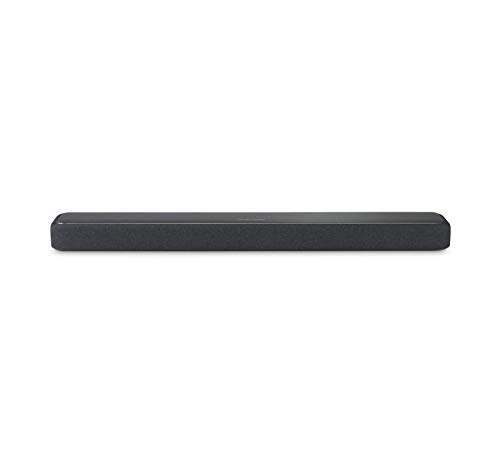 In addition to Bluetooth, I connected my Sony TV’s optical digital-audio output to the KEF LSX system. After watching Miracle Workers and The Big Bang Theory on TBS, Law & Order on Sundance, and The Fifth Element on SyFy, it was clear that the speakers deliver rich, full sound with excellent dialog intelligibility. By comparison, the Harman Kardon Enchant 800 soundbar I recently reviewed sounded somewhat thin with exaggerated sibilants.

Of course, in this use case, it would be best to program the TV or universal remote with the LSX volume, mute, and source-selection remote commands. Otherwise, you must juggle at least two remotes.

By now, it should be obvious that I love the sound of the KEF LSX. These speakers are small but mighty, painting a richly detailed, well-balanced sonic picture. Even my wife, who isn’t very fussy about audio quality, noticed how good the LSX speakers sound—with no prompting from me. Of course, you could get even better bass by adding a subwoofer, though the LSX is certainly no slouch in the bass department all by itself, especially considering its size.

The build quality is equally impressive; these things are as solid as bricks! They are perfect for placement on a desk to accompany a computer or a bookshelf to fill a room with beautiful music. (I would not place them within a small, enclosed bookcase or right up against a wall, which would block the rear ports. Such placement would dramatically degrade the sound.) They can even enhance TV sound better than many soundbars! And these speakers look fantastic doing it.

My only real complaint is that the LSX does not wake up from standby mode and automatically switch to the active input when it receives a signal. Of less importance, the less-common AC power connector makes it a bit more difficult to replace a lost power cord.

Then there’s the price: $1,100 for the pair ain’t cheap! But if you can afford them and you need big sound from a small package, the KEF LSX is hard to beat.