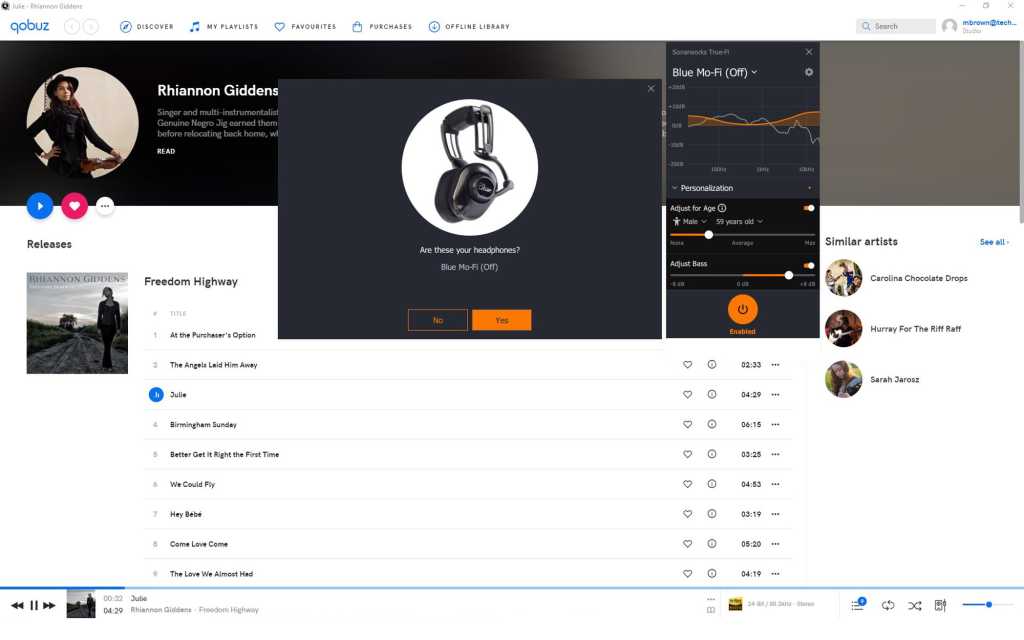 Sonarworks’ Tru-Fi software instantly tunes your headphones to make them sound closer to what the artist heard in the recording studio.

Sonarworks says its True-Fi software can transform the music coming from your headphones, bringing it closer to what the recording artist heard in the studio, and improving any headphone’s performance by removing the coloration that gets between you and the music. That is an awesome promise, so the obvious question is, “does it work?”

Sonarworks sent True-Fi and some headphones for a test. The good news is that generally speaking, I found that Sonarworks largely delivered on its promise, improving to varying degrees the performance of each of the headphones I tested.

Sonarworks developed another software program, Reference 4, that is aimed at recording studios. The company says Reference 4 is used in more than 30,000 of these facilities worldwide. Reference 4 adjusts the frequency response of supported models of studio monitors (loudspeakers) and headphones to match the company’s studio reference sound standard.

True-Fi, by contrast, works only with headphones (287 models were supported at press time) and is designed for the average consumer. True-Fi works on both Windows and macOS, and there are Android and iOS versions in the works (these are available for “early access” in the app stores, but I did not evaluate either). Sonarworks announced at CES in January that customers who purchase a True-Fi license before those apps are released for sale will receive a free upgrade for a lifetime license to the mobile versions. A free 10-day trial of the desktop version is also available.

Sonarworks’ True-Fi functions in a similar vein to today’s top room-correction packages, such as Audyssey, Anthem ARC, Dirac, and Trinnov. If you’ve ever examined a frequency-response chart, you’ll note that it is not ruler flat. The typical curve is riddled with peaks and valleys, indicating that the drivers inside the headphone will overemphasize some frequencies and under-emphasize others, coloring the audio reproduction compared to what was recorded in the studio.

In an ongoing effort, Sonarworks measures and analyzes each supported headphones’ frequency response, looking for its shortcomings. Once this analysis is complete, the team applies the appropriate inverse curve to address those frequency peaks and dips. The goal here is to make each headphone’s final sound match their studio reference standard as closely as physically possible.

It’s tempting to think that headphones should exhibit ruler-flat frequency response, from the bottom of the frequency spectrum to the top, but I’ll point you to the pioneering work of Dr. Sean Olive and his colleagues at Harman International, which suggests otherwise.

Customized sound based on your age

True-Fi doesn’t just compensate for a headphone’s frequency response shortcomings, like an EQ package would. As we age, we lose our ability to hear high frequencies. True-Fi therefore also takes into account the listener’s perception of sound, adjusting its target curve based on your age and gender.

Sonarworks added a slight boost to the bass response of all the headphones I tried; if you’re under 21 years of age, however, True-Fi won’t touch anything else. The older you are past 21, the more True-Fi compensates by boosting frequencies above 2kHz or so. Look at the screen shots below and you’ll see how True-Fi boosted higher frequencies as I increased the reported age of the listener.

No matter which you settings you choose, you can turn any of these adjustments on or off, and you can independently boost or cut the bass frequency response to your liking.

Will True-Fi work with any pair of headphones?

Sonarworks must analyze and develop a filter for each make and model of headphones it supports, so this software will not work with just any set of cans—only the ones the company has measured.

Slight inconsistencies in materials in and construction can result in minor sonic differences in the otherwise identical make and model of headphone, so when Sonarworks adds support for a new model, its filter is based on the averaged results of several pairs. The company promises accuracy of ±3dB for each headphone model its software supports.

Send your headphones in for a custom filter

Sonarworks will also produce custom filters for your specific headphones—if you don’t mind shipping them to the company’s facility in Latvia. It’s not such a crazy idea if you just dropped four large on something like a pair of Focal Utopia. When the company receives your cans, they’ll measure and analyze them, create a unique filter, add it to their database, and tag your headphones with a serial number. Enter that number into True-Fi and the software will load that custom filter. Sonarworks promises accuracy of ±0.9 dB for its customer filters.

Prices for this service start at $148 for one pair of headphones with a single profile, or $213 for multiple profiles of a single set of cans. Why would you want multiple profiles? If your model can operate with our without wires, for instance, or if your kit came with different sets of earpads. Sonarworks also sells pre-calibrated headphones—both professional studio models and consumer headphones—manufactured by a variety of builders.

I had no problem loading headphones into the software. I had the options of searching the database by manufacturer and model, or entering in the number of the pre-calibrated headphones. Using the dropdown menu, I could jump between headphone profiles.

I noticed that I could only store four headphones at any one time, however; the moment I added a fifth headphone model/profile, the software would delete one other from the list.

On the Bowers & Wilkins P7 (tested wired), I noticed a more subtle effect. With the Focal Clear, however, the headphone started to sound overly bright with True-Fi enabled. I compensated by adjusting the EQ settings. With the headphones I tried, I noted that True-Fi had a fairly wide-ranging impact depending on the headphone: Dramatic with some; more subtle with others.

What is important for prospective users to understand is that the True-Fi will take away some of a headphone’s character and voicing. You might discover you like what True-Fi does for a given set of headphones, but there’s also a chance you might not appreciate everything it does and conclude that you need to tweak settings to get the most satisfying performance.

Worth the price of admission

True-Fi eliminates the hassle of playing with EQ settings and instantly tunes your headphones against the company’s studio reference sound curve used in thousands of studios worldwide. This is a clever bit of code that can impart anything from a modest change to a radical transformation of your headphone’s sound. The software’s ability to help compensate for age-related hearing loss is brilliant.

But you don’t need to take my word for it, provided you own a pair of supported headphones. Give the free trial version a shot and hear for yourself what this software can do for your next listening session. I think you’ll like it.