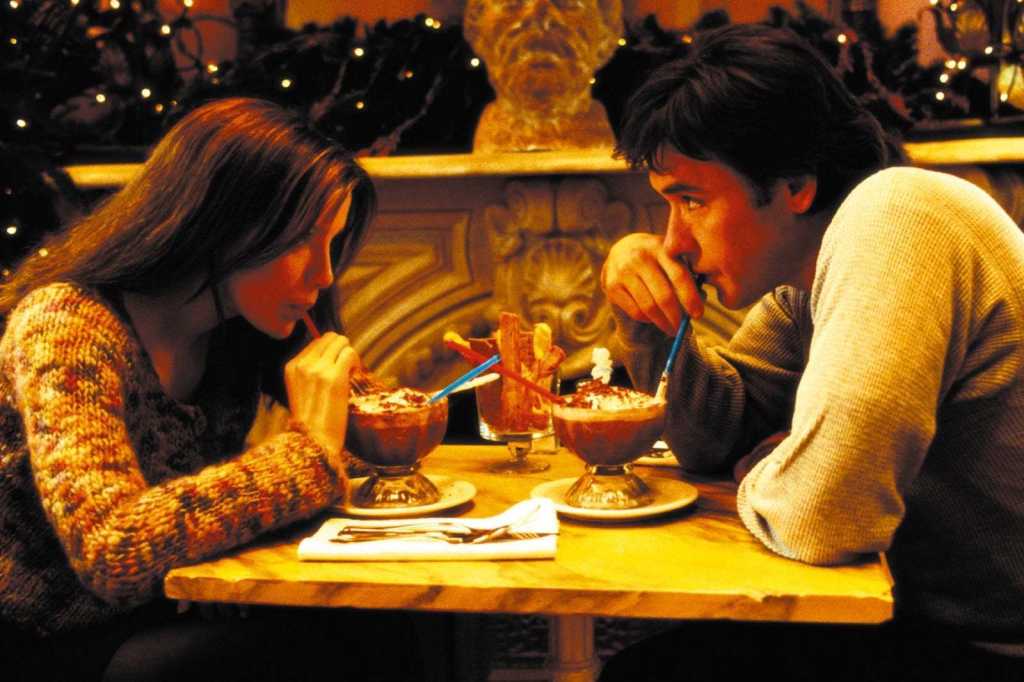 Valentine’s Day is a persnickety holiday. It’s great for some people and a little bitter for others. Realizing that, we have scoured the various streaming services and come up with a dozen great love stories that range from cheerful to anguished, from gooey to cynical, and from Jane Austen to zombies. Break out the popcorn, chocolate, and champagne and enjoy!

Blue Is the Warmest Color (Netflix)

In Abdellatif Kechiche’s Blue Is the Warmest Color (2013), newcomer Adèle Exarchopoulos gives a memorable performance as a young woman who becomes aware that she desires female companionship, and specifically the companionship of a mysterious, sexy blue-haired girl called Emma (Léa Seydoux, Mission: Impossible – Ghost Protocol, Spectre). The movie threatens at one point to collapse into stereotype, but then it recovers, passing through many years, charting the ups and downs of their relationship.

Yet it’s a sensual movie, not just in its depiction of the sex scenes, but also in its depiction of food, friends, and thoughtful discussions. Kechiche cleverly mirrors certain sequences and images (a parade, the color blue, etc.) so that scenes contain extra emotional tones. You might watch it for the steamy NC-17 scenes, but you’ll stay because it’s an outstanding movie.

A wry, cynical romantic comedy with a good heart, Destination Wedding (2018) pairs Keanu Reeves and Winona Ryder, who have already proven their chemistry in several movies, dating back to Bram Stoker’s Dracula in 1992. They play Lindsay (Winona Ryder) and Frank (Keanu Reeves), strangers on their way to a “destination wedding” in San Luis Obispo; they instantly dislike each other, and argue in witty, barbed dialogue. Of course, they will eventually become irresistibly drawn to one another, and they relentlessly analyze their options even as fate takes a different course.

Possibly inspired by masters like Eric Rohmer and Yasujiro Ozu, writer/director Victor Levin frames the characters in sustained, chapter-like sequences, featuring the ridiculous planned events of the wedding, and breaks them up with lovely “pillow shots” to underscore the beauty of the scenery. It’s an unsung gem.

If one can forgive the 30 year-difference between romantic leads Fred Astaire and Audrey Hepburn (Hepburn was so sophisticated and regal that she never seemed right with co-stars closer to her own age), then Stanley Donen’s Funny Face (1957) is one of the latter’s most delightful films, a colorful, kaleidoscopic musical decorated with the art of photography. Astaire plays a Richard Avedon-like photographer who discovers a brainy, philosophy-loving bookshop clerk and makes her into his latest model. Thus begins a conflict of intelligence versus emotions, brains versus beauty, but veering towards doe-eyed romance.

One of the greatest of all Hollywood directors, Howard Hawks was known for being able to tell a great story, usually about group dynamics and codes of honor, in any genre—from screwball comedy to Westerns and detective stories. Gentlemen Prefer Blondes (1953) was one of his only musicals, and true to form, it’s a treat. Jane Russell and Marilyn Monroe star as Dorothy Shaw and Lorelei Lee, a couple of lovely ladies who board a ship for Paris to potentially find husbands.

Lorelei is drawn to men with money (Monroe sings the iconic “Diamonds Are a Girl’s Best Friend”), while Dorothy loves chiseled physiques (Russell sings “Ain’t There Anyone Here for Love?” with an entire team of U.S. Olympic athletes). But fate, of course, has other plans. Even for its time, and even in its broad, cartoonish way, the movie is quite sophisticated, getting away with plenty of sly playfulness in terms of sexual desire, gender roles, and empowerment. The hapless males in the film include Charles Coburn, Elliott Reid, Tommy Noonan, and Taylor Holmes.

In the Mood for Love (Kanopy)

The Hong Kong-based filmmaker Wong Kar-wai has dabbled, like his contemporaries, in crime and action and martial arts films, but he also had broader ambitions. He reached arguably the pinnacle of his career with the achingly unfulfilled romance In the Mood for Love (2001). Maggie Cheung and Tony Leung Chiu-wai (who had both appeared in Wong’s earlier films Days of Being Wild and Ashes of Time) play neighbors in a restrained, ornate 1960s-era Hong Kong.

Spending time together, they come to realize that their respective spouses—never actually seen in the film—are having an affair. The two begin to see each other frequently, trying to decide what happened and how, and attempting to understand their feelings. Not unexpectedly, they begin to become attracted to one another, but are unable, or unwilling to act. The fierce, aching emotions under the clamped-down surface provide the movie’s immense power, while the deceptively still visuals belie Wong’s fluid, dynamic style.

Let the Sunshine In (Hulu)

One of the best films of 2018 by one of the world’s best filmmakers, Claire Denis’s Let the Sunshine In (2018) is rather unlike her earlier films (Beau Travail, White Material), paying less attention to characters with a certain space and more attention to a character’s state of mind. Juliette Binoche gives a dense, subtle performance as Isabelle, a woman who is involved with many different men, but continually hopes to find her one true soulmate.

The men are poor lovers, married men, an ex-husband, or simply men with whom she doesn’t connect (or do not connect with her). The movie brilliantly plays with movie-influenced notions of what love means; there is a movie-ready romantic moment on a dance floor that doesn’t quite go where she hopes. It ends with a quite long, tour-de-force sequence wherein a fortune teller (Gérard Depardieu) keeps Isabelle’s hopes alive; this audacious sequence even continues while the credits roll!

Writer/director Whit Stillman made his career with sophisticated, erudite comedies about educated, well-to-do urbanites, so it makes perfect sense that he could transfer his talents to the adaptation of a Jane Austen novella; the result is more bracingly personal and human that most dry costume dramas. Love & Friendship (2016) stars Kate Beckinsale—at her very best—as one of Austen’s most acidly funny characters, Lady Susan.

She visits her brother’s estate in the hopes of landing a wealthy husband and begins flirting with her sister-in-law’s younger brother (Xavier Samuel). But her grown daughter (Morfydd Clark) turns up, complicating things, so Susan tries to fix her up with the blathering, nitwit Sir James (a scene-stealing Tom Bennett). As a highlight, Susan sometimes reports her progress to her American friend (Chloe Sevigny). Stillman gets playful behind the camera, introducing characters with freeze-frames, and opening up the genre’s usual stuffiness with a fresh airiness.

This one’s a sweet, charming, lightweight love story that received mixed reviews at the time of its release, but still has its admirers. Jonathan (John Cusack) and Sara (Kate Beckinsale) meet, reaching for the last pair of gloves while Christmas shopping at Bloomingdale’s. They spend the evening together and feel a strong bond—and a strong sense of destiny—but Sara insists that if it’s really meant to be, they will find each other once again. She writes her number in a copy of Love in the Time of Cholera, and it’s up to Jonathan to find it in one of the city’s used bookstores.

Serendipity (2001) was a victim of fate during the time of the 9/11 attacks, and it was one of the movies whose images of the twin towers were digitally erased. But its romantic takes on both New York and San Francisco, as well as its funny supporting cast (Molly Shannon, Jeremy Piven, Eugene Levy, etc.), make it worth a look.

A selection from my own significant other, 13 Going on 30 (2004) is a fantasy romantic comedy in that it relies on magical or supernatural elements to get it going. At age 13, Jenna is humiliated by a clique of powerful schoolgirls, and wishes she were older. The wish is granted. She wakes up, just shy of age 30 (and played by Jennifer Garner), but with her 13-year-old brain intact. She has no idea how to be an adult or what has happened in the world in the intervening years. Fortunately, sweet, handsome doofus Mark Ruffalo is on hand to help.

It’s pretty shopworn and predictable, but it’s also a nice, gentle example of female empowerment, and Garner gives 100 percent to her performance, pulling off precisely what Tom Hanks did previously in the similar Big. And it’s hard not to smile when Jenna starts up a group “Thriller” dance to liven up a dull party. Judy Greer, Andy Serkis, and Kathy Baker co-star, and the late Gary Winick directed.

After the arthouse success of Reservoir Dogs, and before the phenomenon of Pulp Fiction, this early Quentin Tarantino screenplay was sold to a big studio and directed by Tony Scott. Scott seemed to realize what he had and didn’t do much damage to it. True Romance (1993) is an exciting, extremely clever crime story filled with movie love, great dialog, and—amazingly—a heartfelt love story that works.

Clarence Worley (Christian Slater) goes to a Sonny Chiba triple-feature on his birthday and meets Alabama (Patricia Arquette). Even though she was a call girl hired by Clarence’s boss, the two fall immediately in love, and Clarence vows to get her things back from her pimp, the vicious Drexl Spivey (Gary Oldman). Unfortunately, he accidentally grabs a case of cocaine instead. The incredible cast includes Michael Rapaport, James Gandolfini, Brad Pitt (hilarious as a stoned pothead), Val Kilmer (as Clarence’s conscience-like vision of Elvis), Bronson Pinchot, Samuel L. Jackson, and Saul Rubinek. There’s also an astonishing face-off between Dennis Hopper and Christopher Walken.

Jonathan Levine (All the Boys Love Mandy Lane, 50/50) adapts the novel by Isaac Marion and directs the warm, hopeful Warm Bodies (2013) a zombie comedy that is actually a sweetly effective romance. Nicholas Hoult plays a zombie called “R,” who can’t speak, but who narrates in his head; Hoult’s expressive eyes help convey his thoughts even when his words can’t. He shambles around an airport with his pal “M” (Rob Corddry), looking for brains. He dines on Perry (Dave Franco), finds himself absorbing Perry’s memories, and even begins developing feelings for a human girl Julie (Teresa Palmer). He convinces her to seek safety in his hideout, an abandoned airplane filled with things he’s collected, and Julie weirdly begins to see something human in the zombie.

But don’t worry, zombie fans, more brain-eating is on the way. Inspired by Romeo and Juliet, this one is remarkably free of cynicism, a genre mashup that somehow finds something new. The delightful Analeigh Tipton co-stars as Julie’s friend Nora.

Another lovers-on-the-wrong-sides-of-the-tracks story, Witness (1985) throws together a hard-boiled big city cop, John Book (Harrison Ford), and a proud, inexperienced Amish woman, Rachel (Kelly McGillis) for romantic sparks. On a visit to the city, Rachel’s son Samuel (Lukas Haas) witnesses a murder. Book interviews him, and discovers that the killer is a cop. Book is attacked, realizes that he’s compromised, and takes mother and son back to Amish country to hide. While his wounds are healing, Book begins to learn the simple Amish ways and, despite being from two different worlds, becomes smitten with Rachel. (The sequence with Sam Cooke’s “[What a] Wonderful World” is a keeper.)

The Oscar-winning screenplay is pretty simple, but director Peter Weir gives the movie a dreamy slowness, aided by Maurice Jarre’s haunted, aching score, immersing us in two of his favorite themes: out-of-place characters, and clashing cultures. Danny Glover co-stars, and Viggo Mortensen appears in an early role. The move won a second Oscar for Best Editing, and was nominated for Best Picture, Director, Actor (Ford), Cinematography, Score, and Art Direction.