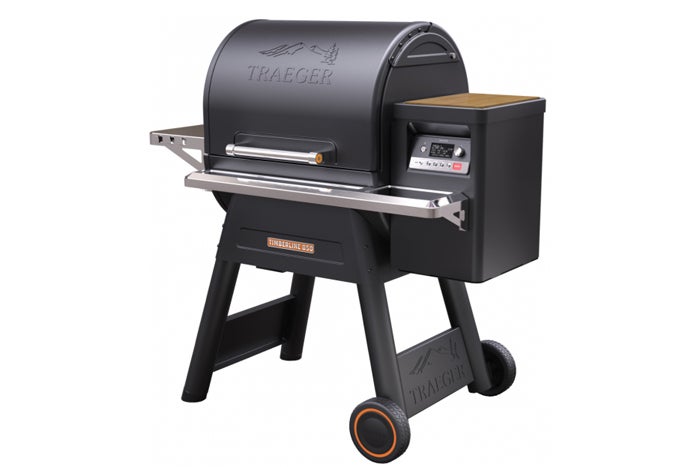 Traeger
At a Glance

The Traeger Timberline 850 is particularly great for low-and-slow cooking with smoke, because it can keep temperatures constant within a relatively narrow range, adding fuel from its hopper as needed and reporting the temperature of your food to its app. It’s not perfect, though: It won’t stop cooking when your food has reached its target temperature, and it won’t warn you if temps drop because it’s out of fuel.

If you’re planning a cookout for Super Bowl Sunday and need a new grill for the job, the high-tech Traeger Timberline 850 Wi-Fi pellet grill deserves your consideration.

Let’s focus first on what makes this pricey grill a great addition to a smart home, and then I’ll discuss what distinguishes a pellet grill such as this from the more familiar charcoal and gas-fired grills. The Timberline 850 connects to your Wi-Fi network, of course, which means you can fire it up, load your food, and pretty much not have to come back until everything’s cooked.

Instead of running to the grill at every commercial break, you can just sneak the occasional glance at the Traeger app on your smartphone or tablet. The grill streams the temperature inside the grill to the app, while a probe reports the internal temperature of the food you’re cooking (there’s just one probe, so you’ll need to decide what to monitor if you’re cooking more than one thing at a time).

And it’s easy to cook several things at once, because the Timberline 850 has three adjustable grills offering 850 square inches of grilling surface. As Traeger puts it, there’s enough capacity to here cook nine chickens, eight rib racks, or six pork butts at once.

The Timberline 850 is also equipped with a monochrome LCD that displays the grill and probe temperatures as well as other important information. You can set the desired cooking temperature from either the app (using your smartphone or tablet as a remote control) or with a dial on the grill itself.

But one of the other big advantages of being connected to Wi-Fi is that you can use the app to choose from more than 1,000 recipes based on what you’d like to cook. You can filter recipes according to the main ingredient (beef, pork, poultry, seafood, and so on); the cooking method (barbecue, roast, smoke, etc.); the number of servings you’re preparing; the cook time, including prep time; and even by the pellet fuel you have on hand or the hardwood flavor you’re looking to impart to the food (more on that later).

The recipe’s degree of difficulty (on a scale of 1 to 5), separate times for prep and cook time, and the recommended wood species are all listed at the top of the app. It would be great if the app recalculated the ingredients and cook and prep times based on the number of servings you want to prepare. But once you’ve selected a recipe, you simply tap the Cook Now button. You still need to push a button on the grill itself to ignite the fire—there are some things that just wouldn’t be safe to do via remote control, after all—but the app will send the target cooking and probe temperatures to the grill. If the recipe calls for smoking the food, the app will send that information to the grill as well.

Cooking with the Timberline 850 is not an entirely set-it-and-forget-it affair, though. While there is a timer on the grill itself (and two in the app, including a discrete timer for preparing sauces), neither will automatically shut down the grill or switch it to its Keep Warm setting when the timer expires. The same is true of the probe—the app and the display on the grill itself will report the target and current temperature, but nothing happens when that target is reached, you need to take action when the cook is over.

Read the manual, but watch the videos, too

Some assembly is required when you bring the Timberline 850 home from the store, and the instructions in the printed user-manual that Traeger provides with the grill aren’t great. As a result, I did not install the grease drip tray correctly the first time, and during my first cook—a glorious prime rib—the drippings from the roast flowed to the back of the grill instead of forward and into the grease channel. After about an hour, a grease fire erupted. Fortunately, I was able to put the fire out without ruining the meat.

To be clear, the grease fire was user error—in other words, it was my fault and not due to a Traeger design error. But Traeger’s assembly manual needs work. I discovered later, however, that Traeger has also produced some excellent videos, available online, including ones that show you exactly how to assemble the grill. Other videos focus on everything from recipes to routine maintenance and troubleshooting, and they’re available on the web as well as within the app itself. If you buy one of these grills, I heartily recommend watching the assembly videos before putting yours together.

Traeger specializes in pellet grills, which operate very differently from gas or charcoal rigs. You load food-grade wooden pellets into a hopper—the Timberline has a big one that handle up to 24 pounds—and an auger gradually moves them into a firepot. An electric element in the firepot heats the pellets until they catch fire, generating heat and—if you want it—smoke. A fan circulates the heat and smoke inside the barrel-shaped enclosure cooking the food with convection heat, evenly and from all sides at once.

Burning pellets offers several advantages over charcoal and gas, the latter of which imparts no flavor at all to the food you’re cooking. First, it’s very easy to maintain a consistent temperature inside the grill. I cooked more than a dozen meals on the Timberline 850 and its internal temperature rarely moved more than five to 10 degrees to either side of the target I programmed. Once your food is cooked, you can activate a “keep warm” setting that will ensure that it stays warm without being overcooked.

Second, you can choose different flavors of wood to burn. Traeger manufactures eight varieties of pellets, including alder, apple, cherry, hickory, maple, mesquite, oak, and pecan. Scroll down this page on the Traeger website to see which species of wood is best for beef, pork, lamb, seafood, veggies, and even baked goods (you can use the grill like any other convection oven).

Traeger also offers various blends for all-purpose cooks. A door on the back of the hopper lets you dump unused pellets into a bucket when you want to change out the flavor (Traeger also recommends emptying the hopper after a cook, so that the pellets aren’t exposed to moisture, which will cause them to swell or even disintegrate). Most pellets cost about $19 for a 20-pound bag, so the cost of supplies is one of the drawbacks of the pellet approach. Charcoal and propane are both much less expensive grilling fuels.

But pellets burn a lot cleaner than charcoal: There’s much less ash to dispose of, and what ash there is is relatively contained in and around the firepot. And because you’re cooking with a more indirect heat, there’s less of a chance that food will stick to the grill. The downside, on the other hand, is that it’s more difficult to get those appealing sear marks on your food, because the grill doesn’t get as hot. (Some of Traeger’s competitors provide a searing box for just that purpose.)

Traeger says the grill can cook from a low temperature of 165 degrees Fahrenheit to a high temp of 500 F. While these conditions might not be conducive to sear marks, I found the easy cleanup, which required just a wire brush to clean the grill, to be a perfectly acceptable trade-off. I never needed to scrape or scour any surfaces.

Now that’s not to say there is no cleanup needed. It’s easy enough to toss the disposable aluminum drip tray liner after a cook, but cleaning the grease out of everywhere else it accumulates is no more pleasant a task than it is with any other grill. That said, most of the grease gets channeled to a removable tray underneath the fire chamber (provided you’ve installed the grease drip tray correctly, that is).

I mentioned earlier that neither the grill nor the app will warn you when the temperature inside the barbecue falls significantly below the target range. Opening the Timberline 850’s lid will cause the temperature to drop rapidly by 100 degrees or more, so expect cook times to be a little longer than anticipated if you’re frequently opening the grill to baste your food. The temperature probe will otherwise greatly reduce the need to check on your cook frequently, but again, there’s only one probe.

One problem I encountered, however, was that gravity alone was sometimes not sufficient to cause the pellets to fall down into the hole where the auger is located, beneath the hopper. This will of course starve the grill of fuel, causing the cooking temperature to drop. There’s a grate covering the top of the hopper to prevent you from sticking your fingers in there—getting a finger caught in the auger would cause serious injuries—so on longer cooks, I’ve been using a skewer to stir the pellets every 30 minutes or so, to prevent them from sticking together. Traeger should consider installing a vibrating plate at the bottom of the hopper to encourage the pellets to redistribute evenly. That would help them fall into the auger without needing help.

Does it justify its price tag?

The Timberline 850 carries a list price of $1,699. That’s a lot of coin for a backyard grill in anyone’s book. Compared to the price of a high-end oven or range that you’d install in your kitchen, on the other, it’s not so pricey. Still, Traeger expects you to pay a lot for this grill’s performance and its whiz-bang features. There are much cheaper alternatives that don’t connect to Wi-Fi, that don’t have accompanying remote-control apps, and that don’t automate the cooking process the way the Timberline 850 does.

This pellet smoker/grill is made for people like me who enjoy the outcome of barbecuing and smoking much more than the process. I don’t have the time or the patience to constantly check temperatures, fuel levels, air flow, cook time, and other minutiae. The Timberline 850 comes very close to set and forget. It’s not perfect, but it never failed to cook an impressive meal, even when I wasn’t paying attention or following directions to the letter.