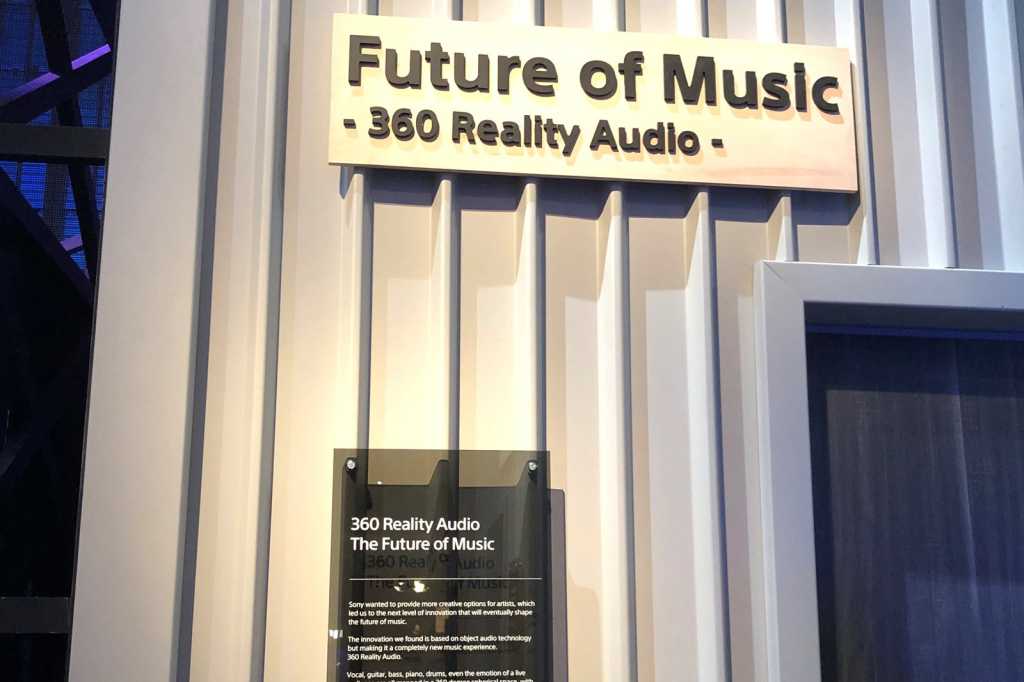 With its intriguing “Future of Sound” presentation on the floor of CES, Sony is once again banging the drum for multi-channel audio. This time, with a concept it calls 360 Reality Audio.

Sony engineers are pushing an object-based musical environment that, like Dolby Atmos and DTS -X, places sound in a seamless 360-degree spherical pattern that can move the beats over your head as well as around your shoulders, “making it a completely new music experience.”

There’s one big difference: If all goes according to plan, “360 Reality Audio will win more favor with “the modern music fan who lives on headphones” rather than with the audiophile geek willing to clutter up a room with a huge array of speakers,  a Sony spokesperson said.

The project is built on the highly efficient, MPEG-H 3D Audio standard for multichannel encoding/decoding, both to avoid the cost of licensing fees to a Dolby or DTS and to ease the introduction of 360 Reality Audio on streaming services.

In two gear-filled listening rooms on the edge of Sony’s CES exhibit, an obsessive Sony audio team from Japan and Southern California rigged up a fascinating comparison test to prove the possibilities.

First half of the test had us listen to a 13.2-channel array of speakers—nine up-front in three curved rows of three across (high, medium, low), plus another four speakers positioned in the back of the room—two suspended high on a rail system (as were the top row in front) and two more at ear level for our fixed seat positions. Two floor-standing subwoofers completed the array.

While listeners were urged to put away our smartphones, there was some visual enhancement: an on-screen display mapped the room and placed visual bubbles where the musical instruments and voices (on a catchy female-fronted soul pop tune) were being placed in the sound field.

The second half of the test had us listen to the same music on high-end Sony headphones, for which custom adjusted for each of us using in-ear microphones and a tone-sweeping test (like you’d use when setting up a multi-channel receiver and speaker system.)

I can’t say the object placement with time- and phase-aligned head-related transfer function (HRTF) processing was as precise as it was with the room full of speakers. But the headphone mix was authentically airy and dramatically multi-dimensional, with an added advantage: When listening on headphones, you’re always centered in the sweet spot. Unless you jigger the settings to rotate the music as you twist your head, an odd feature I heard demonstrated the next night by Dolby on their new $900 headphones tuned for Atmos play. (Save that trick for the video-game mixes, guys.)

Sony is already warming up artists on its record label—including Pharrell Williams and Michael Kiwanuka—to the possibilities of creating in a 360-degree environment. And as owner of the Columbia and Epic catalogs, Sony has a huge inventory of classic material it could easily reconfigure for the cause. Much of it previously released in the four-channel SQ Quad era of the 1970s on vinyl, and later material issued as 5.1-channel SACDs.

Sony could also go the route of Giles Martin (who produced those amazing Beatles surround-sound remixes of The White Album and Sgt. Pepper’s) by digging up and recalibrating the original “stems” of multi-track sessions to create new, all-embracing remasters.