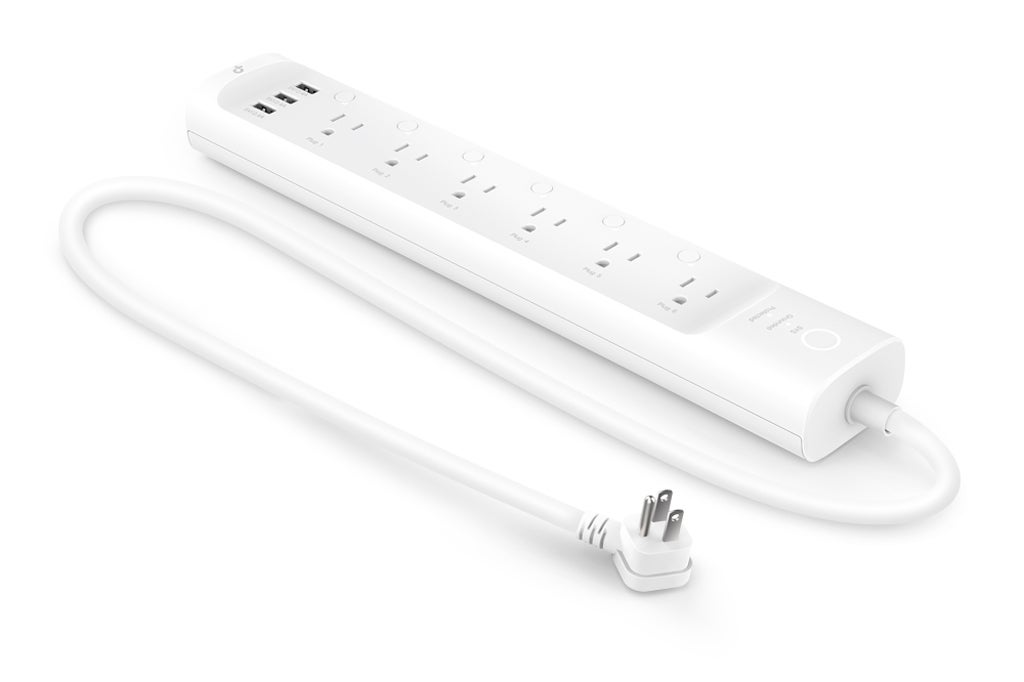 TP-Link’s Kasa Smart Wi-Fi Power Strip makes all the right choices, from a sleek design that fits in with home decor to a set of advanced scheduling options for every kind of routine and travel need—and surge protection.

The Kasa Smart Wi-Fi Power Strip from TP-Link makes no compromises in providing six switched smart outlets and three always-on fast USB charging ports along with power-surge protection. From a sleek design that fits in with modern home décor, to integration with its well-designed app, to an array of voice-control assistant support and scheduling, TP-Link has managed to make the ideal device—a rare achievement in smart-home hardware or electronics of any kind.

The key feature you want in a smart power strip is robust scheduling. If the app is just a glorified per-outlet on/off switch, it might be slightly useful. But at four or five times the cost of a regular power strip, why bother? Scheduling lets you put the intelligence into each outlet, as if you’re combining (in this case) six separate smart plugs or smart switches into one.

What makes this smart strip so spectacular? The Kasa Smart app helps a lot. There are many smart-home ecosystems available, and the app that ties them all together is often the weakest point, even when the hardware offers robust features. This app is almost perfectly organized, and it has an excellent user interface coupled with graphical reinforcement of actions and behaviors to make it crystal clear what action you’re taking and which outlet you’ve scheduled.

Updated August 26, 2020 to inform readers that TP-Link now offers a cheaper version of its Kasa Smart Wi-Fi power strip: The TP-Link model KP303 has three outlets instead of six, and two USB charging ports instead of three. It sells for $39.

The only flaw with TP-Link’s scheduling features is that they apply to individual outlets, which are treated essentially like individual smart devices in the app. That’s too bad, because it means having to create schedules, away plans, or timer settings individually for each outlet—you can’t copy them or group them.

A scenes feature, useful with voice control and the app, lets you group outlets together, but only in a simplified fashion. You need a Kasa Smart Home Router to accomplish more sophisticated scene schedules or triggers. The device works with Amazon Alexa, Google Assistant, and Microsoft Cortana, but isn’t equipped with Apple’s HomeKit support.

The switch also includes three USB ports for charging, but these aren’t intelligent—they’re always on. They can provide up to 2.4 amps at 5 volts each, or a maximum of 4A across the three simultaneously. (Editors’ note: A TP-Link product manager at a recent tradeshow we attended said the company is considering releasing a firmware update to render the USB ports programmable if there’s sufficient user interest.) Each outlet has an LED light next to it to show if it’s live, and a separate physical switch, flush with the surface, so you don’t need the app for manual control.

This power strip doesn’t emphasize the fact that it’s also a surge protector, with 500 volts protection on each AC power leg. This is on the high side, but considered perfectly effective with modern hardware. TP-Link designed this unit to continue to provide power in the unlikely case the surge-protection circuits wear out from use. If you live somewhere that has regular surges that have burnt out other gear or surge protectors, you might opt for a surge protector that stops power flowing when protection ends.

Grounding and protection status LEDs are on the top at the device near a circular indicator that shows whether the device is fully on or off, while an analog power switch is recessed under the strip. (A setting lets you disable those indicator LEDs, though the ones next to each outlet are always lit if the outlet is on.)

Set up was a breeze. It required creating a user account with an email address with TP-Link, and then switching a smartphone or tablet to join the strip’s temporary Wi-Fi network for configuration. After the strip joins your local Wi-Fi network, the app prompts you to name the outlets, though you can skip that and do it later.

Finding the configuration menu could be easier. From the main Devices list, the outlets appear individually, and you must tap one and then the gear menu to reach the smart strip’s specific configuration for changing outlet icons, naming outlets, and other parameters.

The app’s outlet naming and identification system deserves special mention, as I’ve never seen a system that was so beautifully integrated and graphically rich in a way that reduced confusion instead of adding to it.

When you tap the gear icon to choose an icon for the outlet and name it, the app puts an angled view of the power strip in the background with a power cord plugged into the outlet you’re configuring. These are shown as small, charming schematic drawings when you select them. When you tap an outlet to manage it, however, the drawings appear in the background as isometric 3D drawings, a beautiful extra touch. You can also use a stored photo or take a picture to set as the icon.

And in one more extra feature, for those who want to watch electrical consumption, the Kasa Smart app provides an Energy tab for each outlet, letting you know how much juice whatever’s plugged in consumes.

While I applaud any reduction in unnecessary paper products, TP-Link goes one tick too far as its power strip features too little documentation for getting started. A small card explains how to obtain the Kasa Smart app, but a tiny bit larger or fold-out sheet could make features clear without requiring the download of a PDF, which wasn’t directly linked from the card in the box, either. The app’s built-in help addresses its use and the Kasa ecosystem, but not individual devices like this power strip.

The Kasa power strip isn’t small: it’s a good 20- to 30-percent larger than a similar “dumb” power strip, measuring in at 14 by 2.5 by 1.5 inches, and weighing 1.5 pounds. It has anti-skid feet on the bottom, and an internal slot for wall mounting.

It’s great to have a device about which I have no reservations. If you want a power strip with surge-protection that features multiple smart outlets and makes no compromises in design, hardware, scheduling features, or app-based interaction and control, buy the Kasa Smart Wi-Fi Power Strip. There’s none better: a competitor could only equal it.