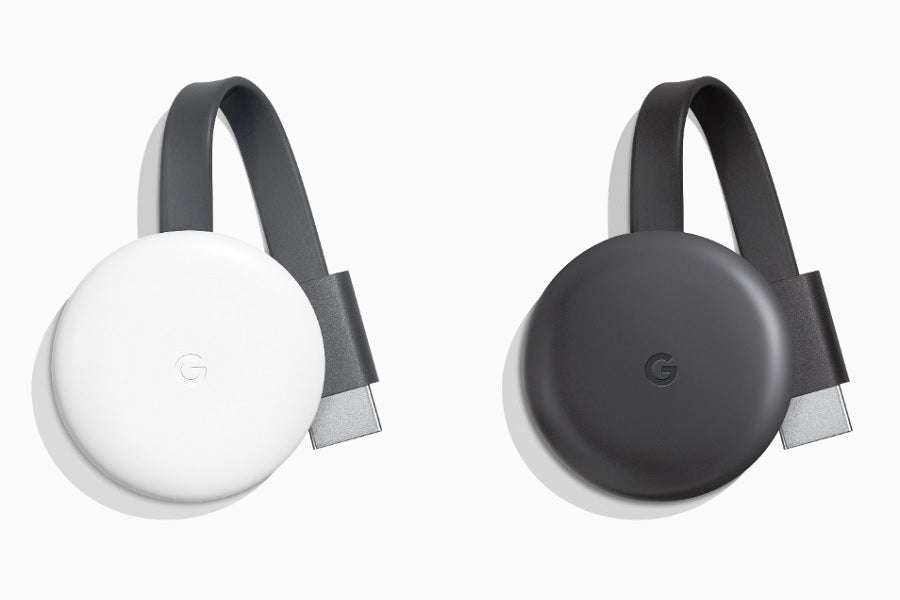 Google is updating its $35 Chromecast dongle with a fresh design and better performance, but not 4K video.

Unlike Amazon’s Fire TV Stick and Roku’s Streaming Sticks, Chromecast does not include a remote control or TV-based menus. Instead, you must use a phone, tablet, or laptop to launch videos from supported apps. If you have a Google Home speaker, you can also launch videos on Chromecast with hands-free voice commands. The new design comes in white or black and has a plumper look than the old Chromecast, but it’s still a circular pendant that hangs away from the television on a short built-in HDMI cable.

Chromecasts can also stream music from services like YouTube Music and Spotify, and Google says it will add multi-room audio support later this year. This will allow Chromecast TV dongles to finally sync up with Google Home speakers, Chromecast Audio devices, and speakers with Chromecast-built-in.

When it’s not being used for TV or music, Chromecast can show pictures from Google Photos. These screensavers will soon support Live Albums, which can automatically display photos of specific faces. (The same feature is also debuting on the new Google Home Hub countertop display.)

Rumors had also suggested that Google would offer a “Smart TV kit” bundle with Chromecast and a Google Home Mini speaker. Google didn’t announce anything of the sort, though you can still get the second-generation Chromecast and a Home Mini for $74 from Walmart or Best Buy.

The impact on you: It’s a bit surprising that Google didn’t add 4K HDR streaming to Chromecast or at least lower the price of the 4K HDR Chromecast Ultra, which still costs $69 two years after launch. Over the last few weeks, Amazon announced the Fire TV Stick 4K for $50, and Roku announced its own cheap 4K HDR streamers (the $40 Premiere and $50 Premiere+). Those devices also include proper remote controls and on-screen menus, as does the Xiaomi Mi Box S, which offers Chromecast capabilities and a full Android TV interface with 4K HDR for $60. Chromecast still has some virtues—it’s simple to use and plays nicely with other Google services—but it’s no longer winning on value alone.