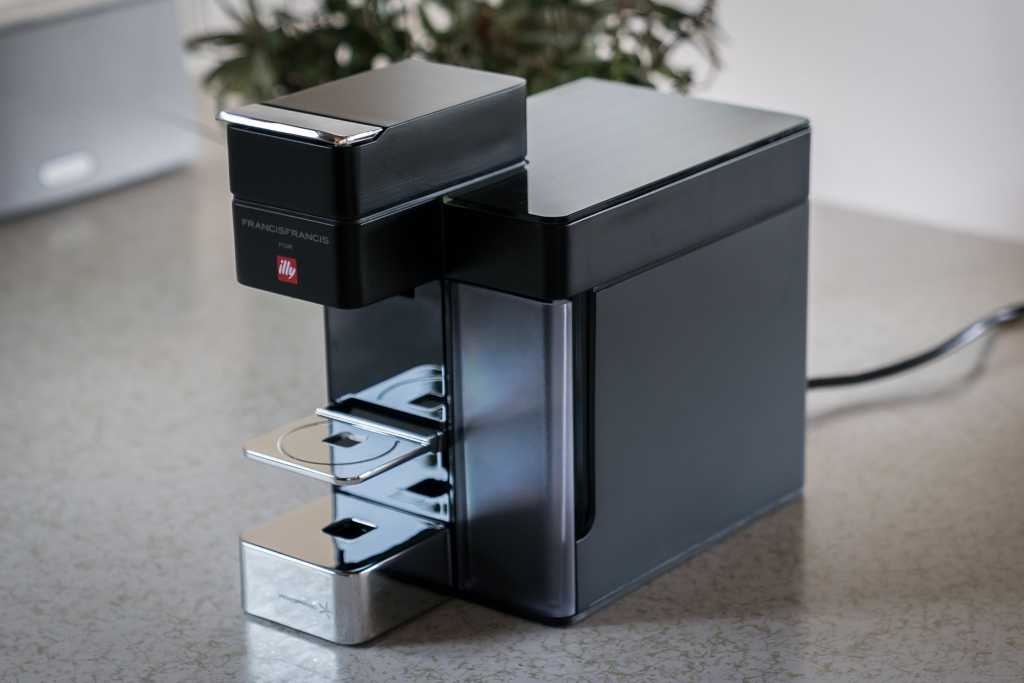 Image: Daniel Masaoka
At a Glance

The illy Y5 Espresso and Coffee Machine is beautiful elegant, but its brews fail to impressive.

The 85-year-old Italian coffee company illycafé has built the best-looking pod coffee machine to date. The Y5 Espresso and Coffee Maker is elegant, wrought from quality materials, and illy says it’s the first of its kind to directly incorporate Amazon’s Dash Replenishment System, so you need never worry about running out of coffee.

If we bestowed awards based solely on industrial design, the Y5 would take top prize. But there’s more to a coffee machine than appearances, and most everything else about this one is disappointing.

Let’s start with the good: It’s absolutely beautiful. This is the coffee maker I would place in the kitchen if I was staging a home for sale. The minimalist design includes just two touch-sensitive buttons—one for espresso and one for coffee—backlit by LED icons behind glass. The handle and cup platforms are fabricated from stainless steel, with plastic used only for the sides and the water reservoir. It looks expensive and feels well built, weighing in at 8.25 pounds despite its diminutive dimensions of size at 5.7 x 11.2 x 9.6 inches—roughly the equivalent of a few hefty cookbooks side by side.

The best products blend industrial design with intuitive usability, and this is where illy falters: While the machine is in standby mode, before the water has been heated, the espresso icon blinks continuously. That’s typically an indicator that the machine needs your attention, but that’s not the case here. To make coffee, you must first touch the espresso button to heat the water. You’ll hear a beep but there’s nothing obvious about what’s happening. Furthermore, the water is only being heated at this point—you’ll need to return to the machine to actually start a brew. Good luck having guests brew a cup without a detailed how-to.

There are only two ways to control serving size—and ultimately, brew strength—without pairing the machine to your smartphone.  First, you can stay put during the brew and stop it manually. Second, you can change the default brew size by pressing and holding the cup icon until the desired level is met.  A quick press will save that serving size as the default. A houseful of coffee drinkers with different preferences should look elsewhere. The machine can’t steam milk for lattes or cappuccino, either, but that’s to be expected at this price. If it’s a must-have feature, take a look at illy’s Y5 Milk, Espresso & Coffee Machine (TechHive has not reviewed it).

Pairing the machine to my smartphone via Bluetooth was a seamless experience. I downloaded the My illy Machine app and with a few clicks in close proximity to the Y5 I was connected. This gave me control over temperature and cup size with five levels for each. The middle levels for both settings are labeled “normal,” but no other temperature or serving-size values are indicated. By my measurements, the “normal” serving size is 12 ounces and the lowest setting is eight ounces, so the increments appear to be two ounces each.

You can use the app to brew on demand, or you can schedule a reminder to brew. The scheduler doesn’t actually create a schedule inside the machine, however, it’s literally just a reminder for you. At this price, the Y5 should support Wi-Fi, so you could program it to operate on a real schedule or even start a brew without needing to get out of bed. Pairing with a smart speaker like an Amazon Echo or Google Home would be even better—you’d be able to use voice commands to brew a cup. And if coffee is part of your everyday routine, frequently refilling the 28-ounce reservoir will become a pain point once the novelty wears off (this will be less of an issue if you’re consuming just one espresso each day).

Illy’s machine brews average espresso: It’s rich with a nice crema, but it’s a little over bitter. As for coffee, I found the “normal” setting (12 ounces) to be undrinkably weak, and while an eight-ounce pour was of the proper strength, the taste just wasn’t there. That can probably be attributed to the fact that each pod consists of a 7.2-gram mixture of instant and ground coffee. For comparison, I use 20 grams of fresh grounds when making pour-over coffee.

And unlike other pod-based coffee systems I’ve seen, Keurig being the most well known, illy’s pods (or “capsules,” as illy calls them) are not entirely sealed—they’re perforated on the bottom, which exposes the grounds inside to air. For this reason, illy recommends that each entire package of capsules (18 coffees for $16.50 on Amazon, or 21 espressos  for $18.49 on Amazon) be consumed within two weeks of opening.

The illy Y5 is a wonderfully sleek smart appliance, and my usability complaints could probably be remedied in software. If illy’s system produced higher-quality coffee, I’d tolerate its shortcomings even if they weren’t, but I suspect that would require a reformulation of illy’s capsules. As it stands, I can only recommend this machine for those whom the flavor of the coffee is the least important feature.