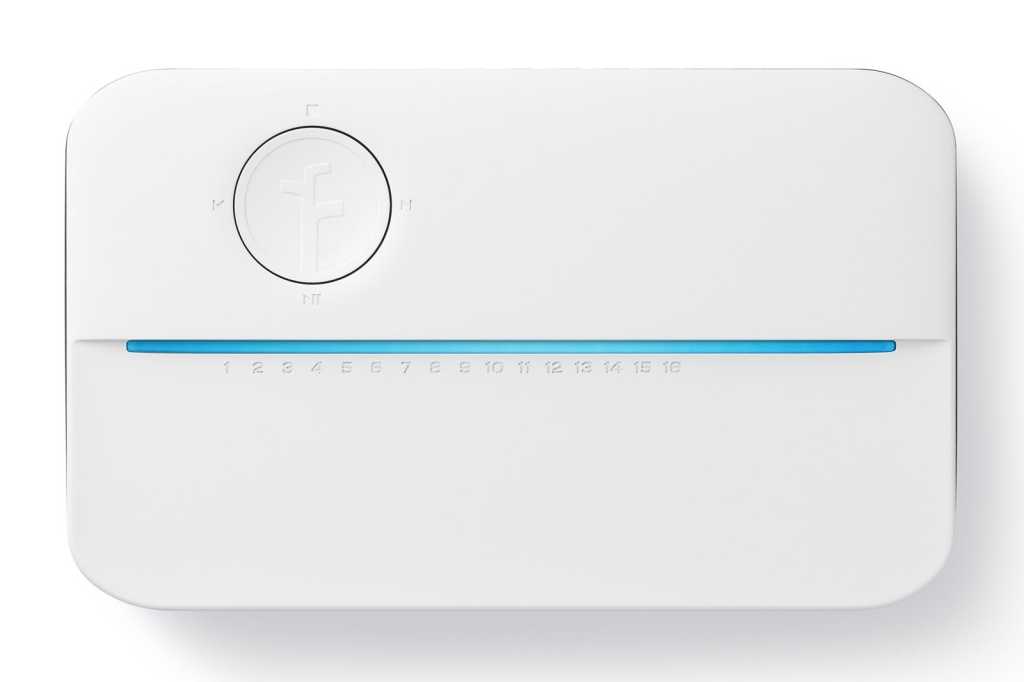 The world’s best smart sprinkler controller gets even better, with new features, better wireless connectivity, and smarter water management. (Note: There is also an 8-zone model that sells for $189.99).

Rachio didn’t need to improve its top-of-the-class smart sprinkler controller, but it did all the same. With its third generation, this irrigation controller pulls even farther away from the rest of the field.

From a hardware perspective, Rachio hasn’t rocked the boat too much. Both an 8-zone ($189.99) and 16-zone ($239.99) version of the controller (we reviewed the latter) are available, and both now support 5GHz Wi-Fi networks. Either way you go, setup remains a snap: Just pop off the cover (which is now magnetic and even easier to remove) to expose the wire clip terminals.

In my review of the second-generation controller, I complained that the clips were difficult to manipulate. Rachio has corrected this so you can now use a fingertip to easily slide wire leads into the connectors, rather than having to struggle with a tiny screwdriver. Once your leads are connected, just plug it into wall power, pop the lid back on, and you’re ready to continue setup via the app. The whole process is even faster than before, taking just minutes to complete, though note that, as with the original Rachio, you’ll need a $30 outdoor enclosure if you’re mounting the unit in the elements.

Rachio recently upgraded its control app, slightly streamlining its setup and scheduling system. Rachio walks you through configuring your zones, which again includes some simple questions about the vegetation and soil types in your yard, its sun exposure, and the slope of the area. It takes all of this into account, alongside your address, to determine an ideal watering schedule for that patch of earth. If I have any minor complaint about the interface, it’s that the setup system makes you manually delete all unused zones, one at a time, rather than giving you a “bulk skip” option.

Water only when needed

You can give Rachio complete control over watering by choosing “Flex Daily” or “Flex Monthly” schedules, which will water as needed, or set up a manual schedule that waters only when you want. Whichever you choose, you can also opt to turn on Rachio’s upgraded Weather Intelligence, which will automatically skip watering if it’s too wet, windy, or if there’s a threat of a freeze, each of which you can select at your discretion. You can even drill down further in the new app by setting how much rain is required before you skip watering. 0.125 inches is default, but you can knock that down to just 0.0625 inches or up to a full inch of rain. You can also set the windspeed above which you won’t water, or the temperature below which you won’t water. For a gardening nerd, this stuff is as fresh as it gets.

I found Rachio’s recommended watering schedule to be a bit light, but better than most. As with the prior Rachio model, however, its detection of moisture was perfect, never watering when it was too wet outside, and helpfully keeping me informed of its status through notifications on my phone and via email updates.

Two major additional features are new to this third edition of the Rachio. First is the inclusion of a water flow meter, which will be bundled with pre-sale units of the Rachio 3 controller. (It will later be made available separately for $100.) While Rachio did not provide the Wireless Flow Meter for us to test, it is designed to detect water leaks in your irrigation system and to shut down the water supply to any affected zones if a leak is detected, all integrating with the Rachio app.

Perhaps more exciting is the inclusion of manual-run buttons on the face of the Rachio hardware itself. They’re so discreet—built into the Rachio emblem—that you might miss them. Their function is limited to selecting a zone and manually starting or stopping a water run, which is simple, but handy if you just need to give an extra area a little extra water without fishing out your smart phone. All programming needs must still be completed via the app.

Do I have any complaints with the Rachio 3, you ask? Aside from the price (now $50 higher than last year’s), only one: When powered up, the unit emits a high-pitched squeal that I can hear from a few feet away. My unit is mounted in the garage, so it’s not really a problem, but if your controller is in a more populous part of the house, that could become a more significant issue.