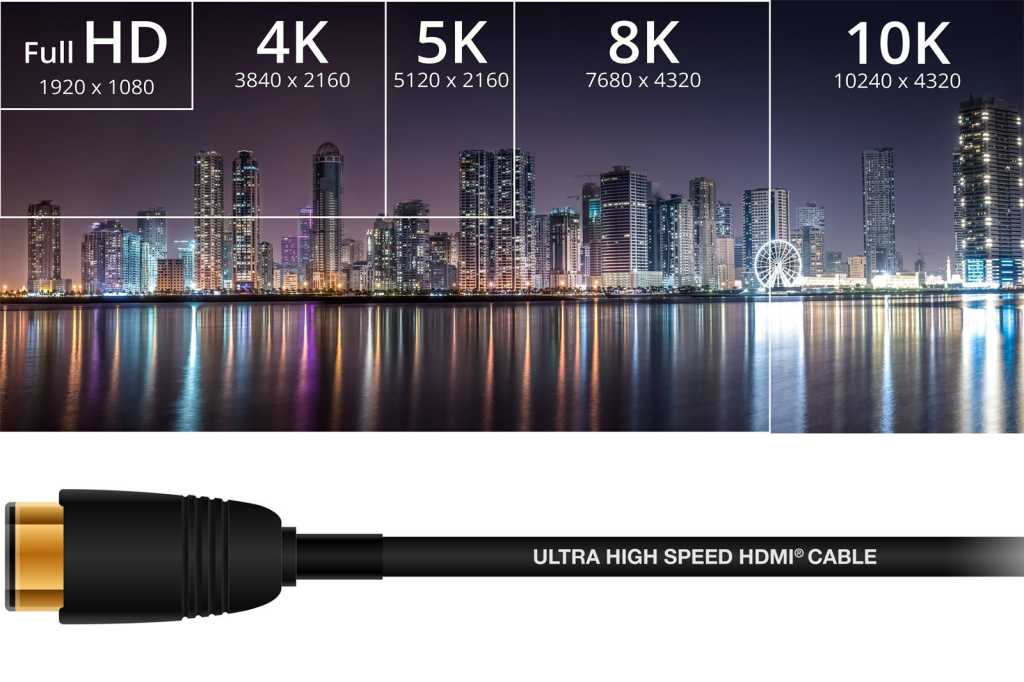 Part of living in a world of rapid technological change is reacting (or not) to evolutionary technologies and standards such as HDMI 2.1. At the gut level, every new spec says you’re now in imminent danger of being out of date, old-fashioned, un-hip, not with it, not running with the cool kids, obsolescent…. Really, I worry about such things.

Will buying a new TV or Ultra HD Blu-ray player with HDMI 2.1 onboard force the purchase of an entire new entertainment system? Hardly. First off, the new standard is completely backward compatible, so you can use everything you now own without penalty, albeit without the benefit of the new features. That primary reassurance aside, to experience the entirety of HDMI 2.1’s 8K and 10K joy, you’ll need new equipment.

There is, however, the possibility that features not related to HDMI 2.1’s increased raw 48Gbps transmission rate—such as dynamic metadata for HDR, data stream compression, variable frame rates, and more—could be grafted onto your present stuff via firmware updates. How likely this actually is, I’ll discuss in the next section.

But the better news is, despite many reports to the contrary, there’s a very good chance that your cables, the component we’re most frequently quizzed about, will be compatible, at least to 4K given our experience. Assuming legitimacy, good quality, and modest length, that is. After all, there is no such thing as a 4K HDMI cable.

Though there aren’t a whole lot of them, upgradeable HDMI implementations do exist. Several TVs we’ve had at our test center were upgradeable from HDMI 2.0 to 2.0a and 2.0b via broadcast firmware updates. Those were expensive TVs, but that’s to be expected. This was possible because many of the HDMI features were implemented in firmware, not hard-coded in a chip.

My query to Samsung about upgradeability drew a very tentative “maybe,” while Oppo, a company that added Dolby Vision to its Ultra HD Blu-ray player post facto, said that it has added updated HDMI features to its boxes in the past. None of these were speed- or resolution-related—factors limited by the processors they use—and I’m guessing that’s a rather common scenario.

I was a little puzzled by Samsung’s response, as the one set of products seemingly most capable of accepting an HDMI update, or upgrade, are the company’s TVs that feature a One Connect external breakout box. The One Connect contains nearly all the ports and I/O processing, so simply replacing it would seem to allow all the new HDMI 2.1 features pertinent to the TV. That would include HFR/120hz 4K UHD where the display panel itself is capable of it. Indeed, future-proofing was part of the buzz when the One Connect first appeared. 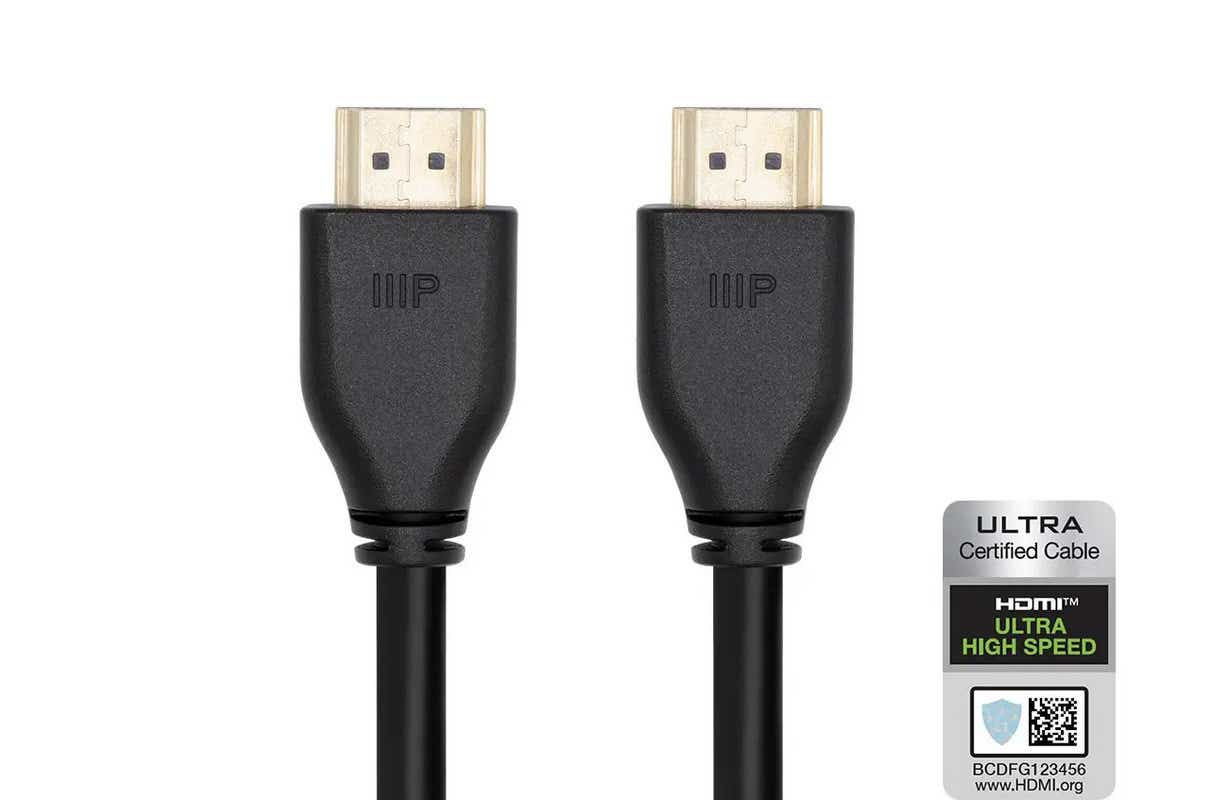 Good cables will work with 4K

The physical shape and layout of HDMI connectors is not changing for HDMI 2.1. There will still be 19 pins and the same number of wires no matter if the connector is normal, mini, or micro. And every legitimate cable or HDMI component must be HDMI compliant, meaning all 19 wires should be there. I said legitimate. With the gray market, of course, it’s always “who knows?”

HDMI 2.1 sports a heap of new features, but the only one affecting cable compatibility is the transmission rate, which has skyrocketed from from 18Gbps to 48Gbps. That’s actually not as dramatic (in terms of cable compatibility) as it sounds. The rate is increasing only from 6Gbps to 12Gbps for each of the three existing data wire triplets (two data, one shield).

The new standard re-tasks a wire triplet, formerly dedicated to clock signals, as a fourth 12Gbps data conduit. The clock signals will now piggyback as metadata. This is all done in a new arrangement is called a Fixed Rate Link (FRL) and is used for uncompressed data streams.

48Gbps might stymie some lesser cables and products, but HDMI 2.1 offers another path to an effectively increased transmission rate and that’s VESA’s DSC (Display Stream Compression) 1.2a. Though the compression is said to be indiscernible, it’s only employed if needed, which will be for higher resolutions with high color depths and fast refresh rates. Any combination of those factors that require compression you’ll see as hash-tagged in red in the table below. DSC 1.2a might also be used if the receiving HDMI component, for whatever reason, doesn’t support the FRL described above.

Even if your cables can handle the signal rate, if inadequately shielded, they could generate disturbing (in the electronic sense) amounts of electromagnetic interference (EMI). If the HDMI transmission wires are not shielded properly, EMI can radiate beyond the cable and mess with other electronic devices in the vicinity.

While all legitimate HDMI cables should be compliant, a certification program was introduced for HDMI 2.0. To earn certification, a cable must pass a more stringent evaluation for throughput and low EMI. Certified cables can display the High Speed (10.2GBps) or Premium High Speed (18Gbps) HDMI logo. If you bought a cable with the latter logo (and possibly, even with the former), you should be in pretty good shape.

As of January 2022, we have tested a host of legacy cables with HDMI 2.1. The good news is that nearly all have worked with 4K UHD up to 60Hz. The bad news is that 8K connections have been problematic. Only the newer 4K (Premium) and 8K (Ultra High Speed) labeled cables have been able to pass on an external 8K signal to the 8K TVs we’ve tested with.

When I talked to the HDMI licensing folks, they expressed confidence that good quality passive legacy cables, especially those labeled HDMI Premium, should work given a length of 2 meters or less. Active legacy cables that boost signal strength should be capable of greater distances. As noted above, we’ve had very good luck with 4K connections to 4K TVs. 8K is another matter–you’ll quite likely need to purchase a newer cable.

As to other equipment, let’s hope that vendors are up for issuing updates where they are feasible.