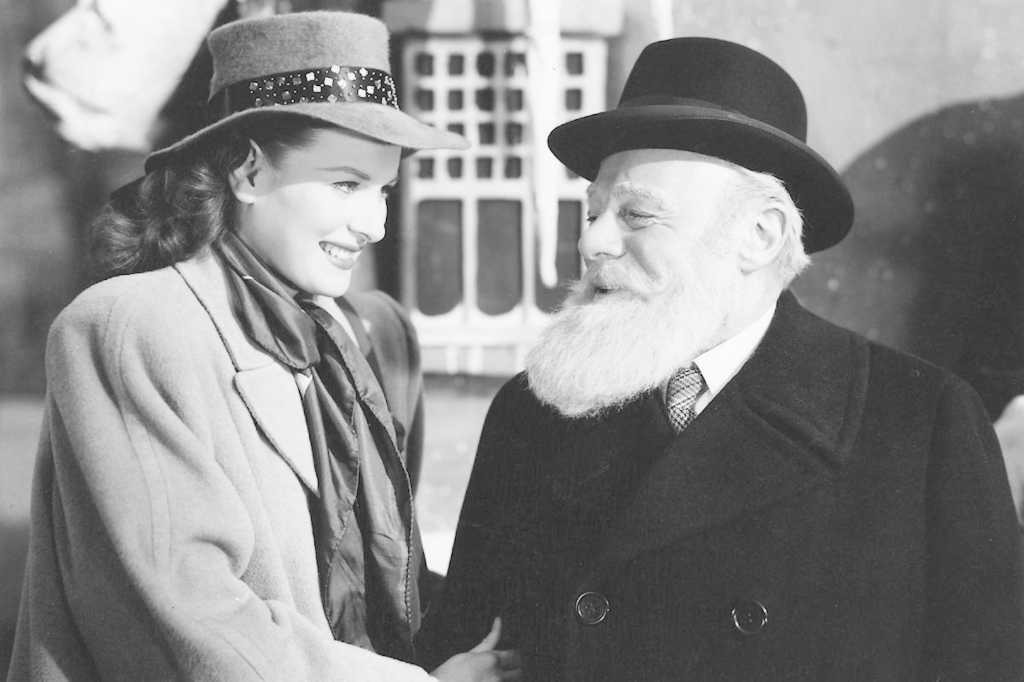 Sure, sometimes you feel like a Scrooge or a Grinch, but other times cord-cutters just want a sweet, lovely, wonderful Christmas just like the ones we used to know. There are any number of movies to help with that, and in addition to our twelve picks that follow, recommended heartwarmers such as It’s a Wonderful Life (1946), A Christmas Carol (1951), A Christmas Story (1983), Elf (2003), Arthur Christmas (2011), and The Christmas Chronicles (2018) are also available for streaming.

And don’t forget the essential Christmas Fireplace: Yule Log With Classic Holiday Films!, available free with ads on TubiTV. It’s a 2.5-hour-long fireplace video with a small television set in the lower corner, playing a selection of holiday-related films. They’re not actually “classics,” but rather a selection of free, public domain shorts, industrials, and TV episodes that no one has ever heard of. It can be nice to play in the background while you’re wrapping presents. Grab your Santa hat and a warm blanket, pour some eggnog, and settle in.

The Bells of St. Mary’s

Director Leo McCarey was easily as skilled as his contemporary Frank Capra at bringing goopy, laugh-cry material to the screen, disarming audiences with humor and then sucking them in with something sentimental. The year before Capra’s It’s a Wonderful Life, McCarey scored a huge hit with this classic sequel to his multiple Oscar-winner Going My Way (1944).

In The Bells of St. Mary’s (1945), Bing Crosby returns as Father O’Malley; this time he’s assigned to help save a struggling Catholic school. He tangles with the feisty Sister Benedict (Ingrid Bergman) and tries to straighten out the selfish businessman Horace P. Bogardus (Henry Travers, who also played the angel Clarence in It’s a Wonderful Life). Only one scene is Christmasy, but it’s a winner: a Nativity play put on by the children. The weirdly accurate tagline in the ads was: “Your heart will be wearing a smile!”

The annual arguments continue over whether John McTiernan’s Die Hard (1988) is a Christmas film,

and each year it seems to become ever more essential December viewing. It also happens to be one of the all-time greatest action movies. Clad in his trademark tank top and no shoes, cop John McClane (Bruce Willis) tries to save his wife Holly (Bonnie Bedelia) and her co-workers when evil terrorist Hans Gruber (Alan Rickman) takes over her building at the Nakatomi Plaza.

Reginald VelJohnson is helpful cop Sgt. Al Powell, William Atherton is Holly’s slimy co-worker, and De’voreaux White is limo driver “Argyle.” There’s a Christmas party, Christmas music (Run-DMC’s “Christmas in Hollis”), and lots of Christmas-themed dialogue. Die Hard 2 followed in 1990, and in case you’re wondering, it’s also an official Christmas movie. “If this is their idea of Christmas, I gotta be here for New Year’s.”

Based on Dr. Seuss’s classic children’s book, this feature-length animated movie isn’t quite as solid as the 1966 TV special How the Grinch Stole Christmas! but it’s immeasurably better than Ron Howard’s gaudy, vulgar 2000 live-action version. The computer animation in Dr. Seuss’ The Grinch (2018) is colorful and bedazzling, like swooping around inside a giant Christmas snow globe, and the tone is surprisingly gentle. (Only the hip-hop music on the soundtrack seems jarringly out-of-place.)

Benedict Cumberbatch provides a measured, nuanced performance as the Grinch, expanding the character in a satisfying way. The screenplay is effectively expanded, too, giving Cindy Lou Who (voiced by Cameron Seely) a logical reason to stay up and meet “Santa Claus” (actually, the Grinch) when he arrives. It all runs a brief 86 minutes, providing constant smiles and never wearing out its welcome. Rashida Jones voices Cindy’s mother, and Pharrell Williams narrates in new quasi-Seussian rhymes.

For some reason, this terrific black-and-white Christmas movie isn’t terribly well-known, but it’s truly delightful and surprisingly adult and modern, and you can’t get much cooler stars than Robert Mitchum (The Night of the Hunter) and Janet Leigh (Psycho). (The tagline has Mitchum saying, “Baby, you’re just what I want for Christmas.”)

In Holiday Affair (1949), Leigh plays professional comparison shopper and single mom Connie Ennis, who causes department store clerk Steve Mason (Mitchum) to lose his job when she buys and returns an expensive toy train set. Steve becomes a fixture in Connie’s life, getting to know her son Timmy (Gordon Gebert) and upsetting her bland relationship with average Carl (Wendell Corey). But Steve’s past eventually catches up to him and brings trouble. The schmaltz-free movie has a vivid New York City, Christmastime feel, with a chill in the air and tinsel hanging on the tree.

Origin-of-Santa-Claus movies and shows are nothing new, but the animated feature Klaus (2019) feels fresh and smart, providing oddly, satisfyingly logical ideas for the beginnings of certain Christmas traditions. It has a great look—hand-drawn characters and backdrops with computer-generated texturing and lighting—and strong voice performances.

Wealthy, spoiled Jesper (voiced by Jason Schwartzman) is punished by his father and sent to be the postmaster of a remote, frozen island, where longtime feuds between the residents don’t result in much need for mail. He meets old toymaker Klaus (voiced by J.K. Simmons), and gets an idea: to meet his quota, and perhaps return to his old life, Jesper encourages the children to write letters to Klaus, asking for toys. The movie sadly relies on some overly familiar plot twists as it goes along, but finally wins the day with its cheerful spirit. Sergio Pablos, who wrote the stories for Despicable Me and Smallfoot, makes his directing debut.

Before seeing Greta Gerwig’s new film version of Louisa May Alcott’s 1868 novel, why not check out George Cukor’s winning, sentimental Little Women (1933), complete with its snowy, heartwarming Christmastime sequence? In it, the March sisters Jo (Katharine Hepburn), Amy (Joan Bennett), Beth (Jean Parker), and Meg (Frances Dee) bring their Christmas breakfast to a less-fortunate family, and find that the feeling of generosity is even better than warm popovers.

The rest of this black-and-white, pre-code movie involves more, similar slices of life, bits of love, anger, and tragedy, that are so clean and classical that they make most other costume movies feel stuffy and stodgy. Hepburn is, of course, a standout tomboy and aspiring author Jo, chirping “Christopher Columbus!” as her preferred exclamation. Spring Byington co-stars as Marmee, and Douglass Montgomery plays Laurie. Gillian Armstrong’s 1994 film version (with Winona Ryder) is also highly recommended.

This great New York City Christmas movie won an Oscar for Edmund Gwenn as Best Supporting Actor, because how can the real Santa Claus not win? Now with a home on Disney+, Miracle on 34th Street (1947) begins at the Macy’s Thanksgiving Day Parade as the actual Kris Kringle takes the seat in the sleigh when the actor hired to play him falls down drunk. Then Santa becomes interested in helping a busy, successful single mom (Maureen O’Hara) and her spunky daughter (eight year-old Natalie Wood). John Payne plays the single nice guy who puts up Kris in his apartment.

The black-and-white cinematography captures a big city, chilly-weather, seasonal hustle-bustle as well as a big-hearted romance. (The original title was The Big Heart.) Look for the wonderful Thelma Ritter as a Macy’s customer. Director George Seaton won an Oscar for his screenplay, as did Valentine Davies for his original story.

After thirty years, this once-irreverent National Lampoon comedy now feels like a cuddly old classic. In National Lampoon’s Christmas Vacation (1989), Chevy Chase’s accident-prone family man Clark W. Griswold agrees to host a big family Christmas while waiting for his Christmas bonus to come in; he wants to use it to pay for a swimming pool. His brother-in-law Eddie (Randy Quaid) causes no end of embarrassment, and there are excessive holiday lights, rodents in trees, dry turkeys, and a kidnapping, as well as a memorable use of Bing Crosby’s “Mele Kalikimaka (Hawaiian Christmas Song).”

This new Disney Christmas movie is a little on the soft side, and it follows some fairly obvious story grooves, but still has a decent amount of charm and holiday spirit. That’s thanks largely to the chirpy, oddball energy of star Anna Kendrick, who plays the title character; she’s the daughter of Santa Claus, who knows everything about how Christmas operates, but whose job is relegated to writing Christmas cards.

When the current Santa dies, his son, Noelle’s brother Nick (Bill Hader), is in line to take over. But he knows nothing about the job and no amount of practice seems to help. Noelle suggests he get away for the weekend, but he doesn’t return. So, she and her elf nanny Polly (Shirley MacLaine) head to Arizona to find him. With cheerful production design, the movie has fun juxtaposing of Arizona’s desert heat with the North Pole’s beautiful snow, ice, and lights. There’s not a bit of cynicism in Noelle (2019), and it’s well worth a peek.

A huge, messy, aggravating, and loving Puerto Rican family, played by a great cast, gathers for Christmas in Nothing Like the Holidays (2008). It’s a definite guilty pleasure, one that deals directly in dreary soap opera mechanics, but also one that sidesteps them deftly with warmth and personality.

Alfred Molina and Elizabeth Pena prepare to host the holiday at their Chicago home, and their grown children start to arrive: buttoned-up and bespectacled Mauricio (John Leguizamo), his wife Sarah (Debra Messing), struggling actress Roxanna (Vanessa Ferlito), and Jesse (Freddy Rodriguez), a Marine just home from Iraq. An uncouth cousin (Luis Guzman) shows up, as does Jesse’s former flame (Melonie Diaz). Someone wants a divorce, someone has cancer, there are arguments and tears, but director Alfredo De Villa roots it all in something genuinely, emotionally tangled and wonderful, and it emerges as something closer to life than to soap.

The G-rated Prancer (1989) is a surprisingly gritty story about a poor girl, Jessica (Rebecca Harrell), who lives on an apple farm with her widower father (Sam Elliot). One night she spots a falling Christmas decoration, a reindeer that she decides must be Prancer. Later, she finds a wounded reindeer in the woods and believes it’s the real Prancer. She concocts a plan to nurse the animal back to health and return him to Santa Claus before Christmas Eve. Along the way, she crosses paths with a newspaper editor and a butcher, as well as other obstacles, but refuses to give up.

While You Were Sleeping

Now on Disney+, this is one of those romantic comedies based on a “lie plot” that could have been annoyingly formulaic, but thanks to an array of sweetly earnest performances, the idea is easily forgiven. In While You Were Sleeping (1995), Lucy (Sandra Bullock) works as a token taker for the Chicago “L” train, and is secretly in love with one of the regular riders, Peter (Peter Gallagher). After a mugging, she rescues him, unconscious, from the tracks.

In the hospital, with Peter in a coma, she is mistaken for his fiancee, and upon meeting his grandmother with a weak heart, Elsie (Glynis Johns), she decides to keep up the ruse. Lucy also meets Peter’s down-home, aw-shucks rocking chair-making brother, Jack (Bill Pullman), and thus begins the real romance. Lucy spends a sweet Christmas with the family before the truth finally comes out in an unexpectedly moving finale. Peter Boyle, Jack Warden, Micole Mercurio, Jason Bernard, and Michael Rispoli co-star.