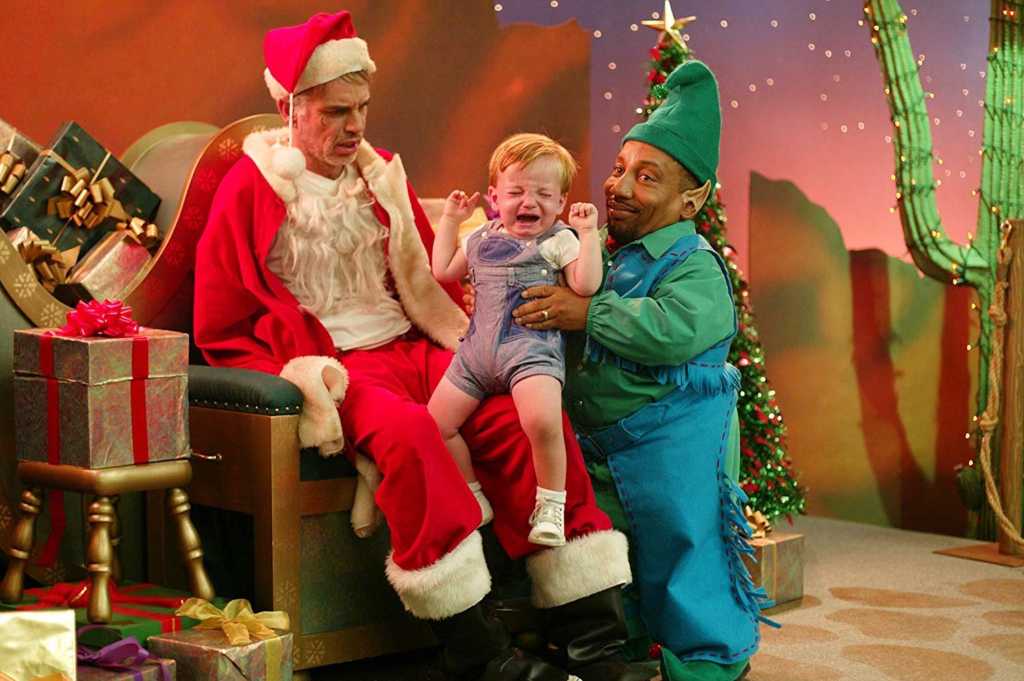 There’s only so many times one can watch It’s a Wonderful Life or A Christmas Story, and, to be honest, sometimes all that bright Christmas cheer is a bit much.

Fear not, Grinches and Scrooges, we have rounded up a dozen misfit toys for you to dig into this holiday season, filled with crime, murder, monsters, zombies, drinking, foul language, bad behavior, and even a snarky superhero. So let loose a hearty “humbug” and begin binging.

If you’re craving something more traditional to stream, don’t miss our other collection of recommendations: “It’s a cord-cutter’s Christmas: The best traditional holiday moves available for streaming.“

Tales from the Crypt

Perhaps the earliest example of a Christmas-themed horror film, Tales from the Crypt (1972) is an anthology film (with only one Christmas segment), based on the old EC comics that once drove parents nuts. In an old catacomb, five tourists get lost and meet the Crypt Keeper (Ralph Richardson), who tells each of them a spooky story. In the first one, Joanne (Joan Collins) murders her husband on Christmas Eve, but as she prepares to dispose of the corpse, she learns that a homicidal maniac, dressed as Santa Claus, is on the loose. As in the comics, there’s a brutal twist ending.

Directed by Oscar-winning cinematographer Freddie Francis, this English movie feels like a first-class production, and yet never shies away from drive-in levels of shock and gore, and the five segments are fairly well balanced in quality, which is a rarity for anthologies. Peter Cushing (Star Wars) and Patrick Magee (A Clockwork Orange) co-star in two of the other segments.

Still the greatest Christmas horror movie ever made, Bob Clark’s Black Christmas (1974) is like a spiked eggnog you can enjoy again and again. One of the very first bloody “slasher” movies, it’s also an expertly paced mystery filled with strong performances and interesting characters, as well as a decent slice of festive holiday cheer. (The darkness and snow are dotted with bright colored lights.)

At a sorority house Christmas party just before the holiday break, an obscene phone caller threatens to kill the girls. The next day one of them is missing, and from his secret hiding place, a killer will strike again. Margot Kidder is great as the hard-drinking, sex-obsessed, swears-like-a-sailor Barb; lovely Olivia Hussey is Jess, who finds herself pregnant; Keir Dullea (2001: A Space Odyssey) is Peter, an obsessed, selfish music student; and John Saxon is the police lieutenant. Amazingly, Clark went on to direct the sentimental favorite A Christmas Story (1983).

While robbing a safe on Christmas Eve, Gus (Denis Leary), trips an alarm and is forced to take hostages—an angry, aggravating, bickering couple, Lloyd and Caroline (Kevin Spacey and Judy Davis)—while hiding out and planning his escape. Gus’s patience is worn hilariously ever thinner as he snarls obscenities at them in a vain attempt to get them to shut up. Later, when Lloyd’s entire family shows up for the holiday, Gus must pretend to be their marriage counselor.

Directed by the late Ted Demme, The Ref (1994) is an amazing collection of foul-mouthed zingers—with the perpetually annoyed Leary as the anchor at the center—as well as a hugely entertaining array of bizarre Christmas rituals (those candle hats!) and plot twists. Despite some bad luck, Gus is an appealingly crafty character who somehow manages to stay just a half a jump ahead of the insanity. Christine Baranski, B.D. Wong, and future Oscar-winner J.K. Simmons co-star.

Maverick New York filmmaker Abel Ferrara, perhaps best known for King of New York (1990) and Bad Lieutenant (1992), gave us this dark, urban, but surprisingly touching Christmas tale; it was barely released in the U.S. but was well received in France. Drea de Matteo and Lillo Brancato, Jr. star as an unnamed well-off New York couple with a BMW and a daughter who attends private school. Yet, beneath that enviable surface, the couple are actually drug dealers, driving around after a day of Christmas shopping to package and distribute their products, as well as buying a black-market version of that year’s coveted Christmas toy the “Party Doll.”

Ice-T co-stars as a kidnapper who snatches the husband and demands a fortune for his return. But de Matteo is a tough cookie and not to be trifled with. Despite all the violence and drugs and corruption and greed, ’R Xmas (2001) is at its heart a movie about the things that genuinely matter most.

Director Terry Zwigoff (Crumb, Ghost World) holds nothing back in the outrageous Bad Santa (2003), perhaps the funniest—and filthiest—Christmas movie ever made. Billy Bob Thornton stars as Willie T. Soke, a drunken, foul-mouthed department store Santa and expert safe cracker. Each year with his more responsible, yet equally foul-mouthed partner Marcus (Tony Cox)—who plays an African-American elf with white plastic ears—they work through December taking wishes from kids and then rob the store on Christmas Eve. This year, Willie meets a hopeless doofus of a kid (Brett Kelly), a pretty barmaid with a “Santa” fetish (Lauren Graham), and a crafty store detective (Bernie Mac), who shake up their usual plans.

The late, great John Ritter is hilarious as a meek store manager. Co-written, without credit, by Joel and Ethan Coen, the movie never forgets to deliver the laughs, even up to the crazy climax. It’s a fully satisfying balance between naughty and nice. Hoopla and Amazon Prime both offer the hit 91-minute theatrical cut, while Amazon Prime also has the slightly darker 88-minute official director’s cut; avoid the longer, 99-minute “uncut” version, which ruins the film’s precise comic timing.

This 73-minute special episode of the very dark sci-fi anthology TV series Black Mirror is like a standalone, feature-length Christmas movie, perfect to stream all by itself. (Look for it in Season Two.) In White Christmas (2014), Jon Hamm and Rafe Spall star as Matt and Joe, two men occupying a remote cabin. What they’re doing there is a mystery, but it seems they’ve barely spoken to one another in five years. Now it’s Christmas, and Matt is determined to get Joe to talk.

Matt tells two stories about his earlier life, first one about his service secretly guiding men through the process of picking up women, and then about another job, developing clones to act as servants. Finally, Joe tells his story, and the entire thing snaps together with a cruel and satisfying click, in the process shattering all the usual formulas used in anthology movies. Oona Chaplin (the granddaughter of Charlie Chaplin) co-stars in the second story as a clone.

Director Sofia Coppola (Lost in Translation) applies her dreamy, dewy touch to this traditional Christmas special turned sideways. Running only an hour, A Very Murray Christmas (2015) focuses more on heartfelt performances than on polished ones (it seems to annoy lots of people). It has an appealingly warm, sleepy, quiet pace, and it’s a perfect antidote for a frenetic holiday season. Bill Murray plays himself, preparing to put on a live Christmas special at the Carlyle Hotel in New York City, but thwarted by a snowstorm.

Co-directors Josh Gordon and Will Speck—one-time Oscar nominees for Best Live Action Short (1997’s Culture)—turn in a busy, overlong, R-rated Christmas comedy, but Office Christmas Party (2016) nonetheless has a decent number of laughs, and the great cast helps (they’re all people you’d want to have at any party).

Newly divorced Josh Parker (Jason Bateman) works at a failing tech company under the leadership of his big-hearted doofus boss, and best friend, Clay Vanstone (T.J. Miller). When Clay’s vindictive sister (Jennifer Aniston) threatens to close shop, the friends decide to throw a huge blowout holiday party to win a lucrative contract and save the day. Olivia Munn, Kate McKinnon, Courtney B. Vance, Jillian Bell, Rob Corddry, Vanessa Bayer, Randall Park, Sam Richardson, Karan Soni, Jamie Chung, Abbey Lee, and Da’Vine Joy Randolph all co-star. There’s way too much plot, and the movie sometimes forgets to be funny as it moves away from the party and struggles to wrap everything up, but it’s still easy to be charmed by the time things end.

Anna and the Apocalypse

But then the zombies come, and the friends must make it across town to the high school to rescue a group of stranded parents. The movie is less silly than it might seem; death means something here. The songs begin delightfully but grow surprisingly darker as things go on. Christmas imagery is used in a subversive way, such as a giant candy cane turned into a weapon, but even if the focus is not necessarily on holiday cheer, this one is still weirdly touching.

All the Creatures Were Stirring

This Christmas horror double feature dropped a year ago on Shudder; neither is particularly great, but both are worth a look. All the Creatures Were Stirring (2018) is an anthology film with a great wraparound segment. On Christmas Eve, the lonely Max (Graham Skipper) and Jenna (Ashley Clements) meet for a date at a local theater, offering a bizarre avant-garde holiday play. The stories are, typically, inconsistent, but one, about a last-minute shopper who is locked out of his car, is terrific. Jocelin Donahue (The House of the Devil) and Constance Wu co-star in other segments.

In Christmas Presence (2018), McKenzie (Charlotte Atkinson)—who suffered a childhood trauma—invites a group of friends to a remote house for the holiday. They drink heavily and try on lots of luxury underwear, and then they begin dying, one by one. The Christmas setting here is more incidental than anything (the original title was Why Hide?) but the movie is still notable for its variety of LGBTQ characters.

Another Christmas-horror anthology movie, Holiday Hell (2019) looks pretty low-rent. It’s uneven, but has some above-average sequences and is worth a look. (It’s a TubiTV exclusive, available free with ads.) The main draw is cult star Jeffrey Combs, best known for the classic Re-Animator (1985), giving an enjoyably weird performance a shopkeeper at Christmas. A woman (Meagan Karimi-Naser) comes in just before closing, looking for an unusual gift. The shopkeeper shows her a few items and tells a story for each.

In a fresh twist, each story takes place at a different holiday. On Valentine’s Day, some teens party in an abandoned house where murders took place, and a killer in a doll-face mask strikes. At Hanukkah, a boy receives a creepy rabbi doll. At Christmas, a man (Joel Murray, Bill’s younger brother) loses everything, dons a Santa suit, and goes on an insane rampage. The fourth tale turns things around and, of course, effectively rejoins the wraparound story.

In an attempt to save the sinking DC Universe movie series, the makers of Shazam! (2019) decided to make a snarky comedy rather than a sludgy, serious explosion-fest, and the gamble worked. Set at Christmastime, this movie is genuinely funny, but more than that, it’s a heartwarming tale about the search for one’s true family.

Troubled orphan Billy Batson (Asher Angel) is adopted by a loving foster family; after defending his foster brother Freddy Freeman (Jack Dylan Grazer) from bullies, he is chosen by a wizard (Djimon Hounsou) to receive superpowers. He appears in a grown-up body (Zachary Levi) with a red suit and cape. At first, the unnamed hero (in the comics, he was known as Captain Marvel, but DC obviously can’t use that anymore) and Freddy have a ball, but then it’s time to get down to business, stop bad guy Sivana (Mark Strong), and save the family. David F. Sandberg, known for the very good horror films Lights Out and Annabelle: Creation, directs.